Please ensure Javascript is enabled for purposes of website accessibility
Log In Help Join The Motley Fool
Free Article Join Over 1 Million Premium Members And Get More In-Depth Stock Guidance and Research
By Danny Vena – May 11, 2019 at 2:42PM

In a world of Goliaths, these two Davids are teaming up.

The Boston Beer Company (SAM 1.63%), brewer of Samuel Adams beer, and privately held Dogfish Head Brewery, maker of distinctive India Pale Ales (IPAs), announced Thursday that they will merge in a deal valued at $300 million in cash and stock. The combination will create "the most dynamic American-owned platform for craft beer and beyond," according to the press release.

The new, larger company "will be better positioned to compete against the global beer conglomerates within the craft beer category that are 50- and 100-times its size, while still representing less than 2% of beer sold in the United States." 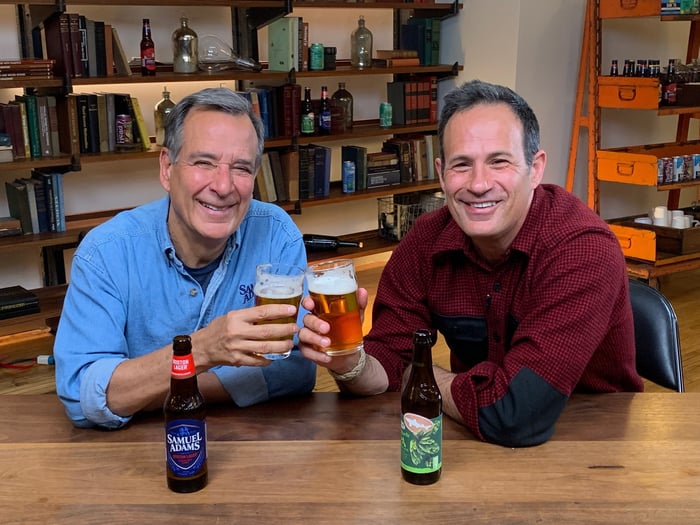 A match made in (beer) heaven

The deal unites the second-largest (Boston Beer) and the 13th-largest (Dogfish Head) craft brewers in the U.S., according to information provided by the industry trade group The Brewers Association. The combined entity will be led by Boston Beer CEO Dave Burwick.

The companies boast complementary product portfolios in the high-end beer and malt-brewed beverages categories. Boston Beer is the home of Samuel Adams Beer, Angry Orchard Hard Cider, and Twisted Tea Hard Iced Tea. Dogfish Head is known for its IPAs and idiosyncratic flavors, as well as for the eclectic names given to its brews. These include "Possibly the Next Top Rated Beer on BeerAdvocate," "Smothered in Hugs," and "Beer for Breakfast." Honorable Mention goes to "Midas Touch Golden Elixir," which was created from the same ingredients found in "2,700-year-old drinking vessels from the tomb of King Midas."

The deal is expected to close late in the second quarter of 2019. Dogfish Head's co-founder Sam Calagione and family will receive approximately 406,000 shares of Boston Beer stock based on a share price of $314.60, while financial investors in Dogfish Head will receive about $173 million in cash.

Boston Beer expects that its current cash on hand and available line of credit will be "more than sufficient" to fund the cash portion of the agreement. The company expects the deal to be neutral to slightly accretive in 2019 and won't have a "material impact" on the company's earnings per share for the year.

Since Sam Calagione and Mariah Calagione (Dogfish Head's other co-founder) have elected to take substantially all of their proceeds from the merger in the form of Boston Beer stock, they will collectively become the largest non-institutional shareholders after Boston Beer Co-founder and Chairman Jim Koch following the close of the transaction.

The deal comes during a time of upheaval and consolidation in the beer industry, with Big Beer gobbling up a growing number of craft brewers. The world's largest brewer, Anheuser-Busch InBev (BUD 1.53%), is just one example of the acquisitive ways of the biggest brewing companies. Over the past few years, AB InBev has been responsible for the following buyouts:

By joining forces, Boston Beer and Dogfish Head will be better positioned to negotiate with the wholesale distributors that act as the go-betweens with retailers.

In an interview, Jim Koch and Sam Calagione summed up why the merger was not only necessary, but why they believe it will succeed.

"We kind of are two superheroes with complementary superpowers, but we're tiny little superheroes," Calagione posited. "We hope that people who care about Davids in a world of Goliaths recognize that."

We're all small, and we are competing with these behemoths. To do that successfully, we need to join forces. Most mergers falter on values and founders not getting along. But I've known this guy for 20 years. We've brewed beer together.