Forget about selling in May and going away -- Cisco, General Mills, and Nike are all still great stocks to buy and forget.

Stocks with market caps exceeding $10 billion are called large-cap stocks. These stocks, which account for over 90% of the U.S. equities market, are generally better suited for conservative investors than their small- and mid-cap peers. 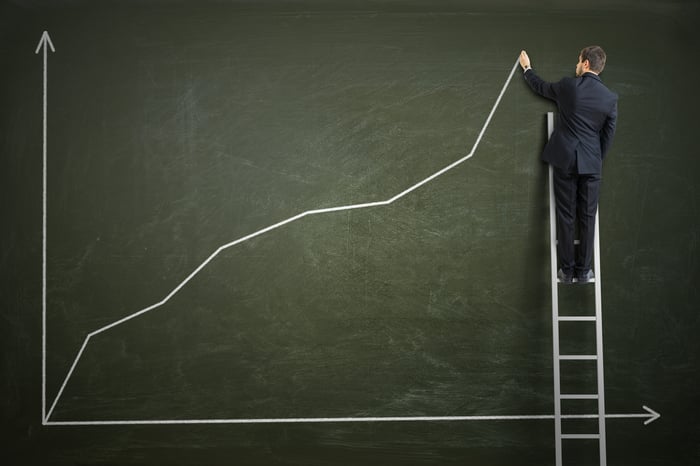 A market leader with a wide moat

Leo Sun (Cisco): Cisco is the world's leading maker of networking routers and switches. Those are generally slow-growth markets, but demand has accelerated in recent quarters as enterprise campus customers upgrade their networks.

Cisco's smaller security and applications businesses also consistently generate double-digit sales growth, and they're still expanding through acquisitions and new services, which the company bundles with its hardware products.

That prisoner-taking strategy widens Cisco's moat against aggressive rivals like Huawei and Arista Networks. As a result, Cisco's software subscription revenues accounted for 65% of its top line last quarter, marking a ten percentage point increase from the prior year quarter.

Cisco's gross margin remains well above 60%, and it generates less than 2% of its sales from China, which insulates it from tariffs and trade tensions. It expects its revenue to rise 4%-6% annually for the third quarter, and for its non-GAAP EPS to rise 15%-18%.

For the full year, Wall Street expects Cisco's revenue and earnings to rise 5% and 18%, respectively, which is a solid growth rate for a stock that trades at 16 times forward earnings. Cisco also pays a forward dividend yield of 2.5%, and it's been aggressively repurchasing shares ever since it repatriated most of its overseas cash last year.

I personally own shares of Cisco as a defensive stock. Investors who want to start a new position should wait for its third-quarter report on May 15 to see if it's still firing on all cylinders.

Reuben Gregg Brewer (General Mills): With a $30 billion market cap, packaged food giant General Mills is clearly big. Add in an over 100-year history, industry-leading brands, and a long track record of rewarding investors via dividends, and you start to round out the story. Now include the current yield of around 3.8%, near the high end of the company's historical range, and General Mills starts to sound like a compelling buy.

But why is the yield so high? Two reasons. First, consumers are favoring foods perceived as healthy and fresh. That hasn't historically been General Mills' bailiwick. But the company is working to adjust, buying on-target brands (such as Annie's and Blue Buffalo), selling non-core brands (Green Giant), and refreshing existing brands (Yoplait). It will take time, but General Mills has worked through transitions before over the past century. 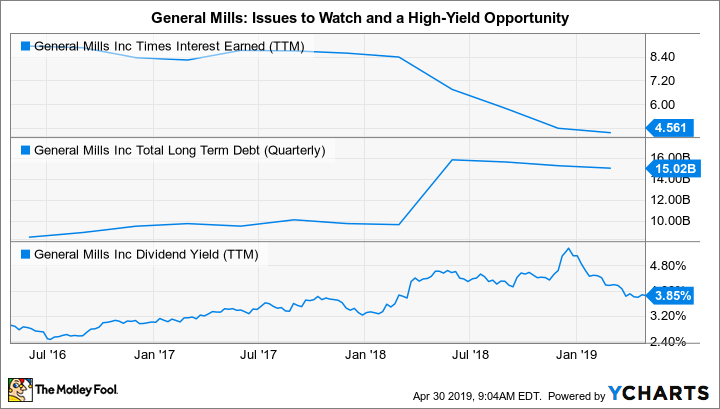 Debt is the second issue. Buying healthy pet food maker Blue Buffalo led to a 75% increase in General Mills' long-term debt, with some market watchers suggesting it overpaid. That said, management is aware of the problem. The dividend will remain at current levels until debt is reduced. The company can cover trailing interest expenses by a solid 4.5 times, and it paid down more than $1 billion in debt over the past year (roughly 8% of the total). At this point, even if Blue Buffalo doesn't pan out as hoped, it looks like General Mills will manage to muddle through.

It's more likely, however, that it adjusts with the times and gets back on track, at which point the dividend will start to increase again. And investors willing to think long term will have picked up a large cap dividend stock on the cheap.

Buy before this industry giant rebounds

Steve Symington (Nike): Shares of Nike are up more than 20% over the past year for good reason: The athletic footwear and sportswear giant has consistently delivered better-than-expected, broad-based growth (both on a geographic and product category basis) as it expands the global influence of its iconic brand.

But shares have also fallen around 6% since mid-March, when Nike posted strong fiscal Q3 2019 results that were held back by the impact of foreign-currency exchange. Of course, currency headwinds are nothing new given Nike's wide geographic reach, and it has hedging programs in place to help mitigate their impact. But all the while, Nike CFO Andy Campion insists that the company will continue investing in key strategic initiatives to enhance its digital/e-commerce capabilities and drive profitable growth in the coming years.

If that's not enough, after completing a four-year, $12 billion share repurchase plan last quarter that started in November 2015, Nike promptly commenced a new $15 billion repurchase program in its place. Coupled with its healthy dividend yielding around 1.1% annually, and with its next quarterly report set to arrive late next month, I think patient investors would do well to consider taking advantage of Nike's recent drop to open or add to their positions.