Please ensure Javascript is enabled for purposes of website accessibility
Log In Help Join The Motley Fool
Free Article Join Over 1 Million Premium Members And Get More In-Depth Stock Guidance and Research
By Leo Sun - May 14, 2019 at 7:30PM

Its operating profit rose 23% annually to 1.15 billion RMB ($171 million), as its adjusted net profit grew 15% to 1.2 billion RMB ($179 million), or $0.11 per ADS -- which cleared expectations by a penny. However, Tencent Music's stock tumbled after the report, presumably due to the marketwide sell-off sparked by rising tariffs and trade tensions. 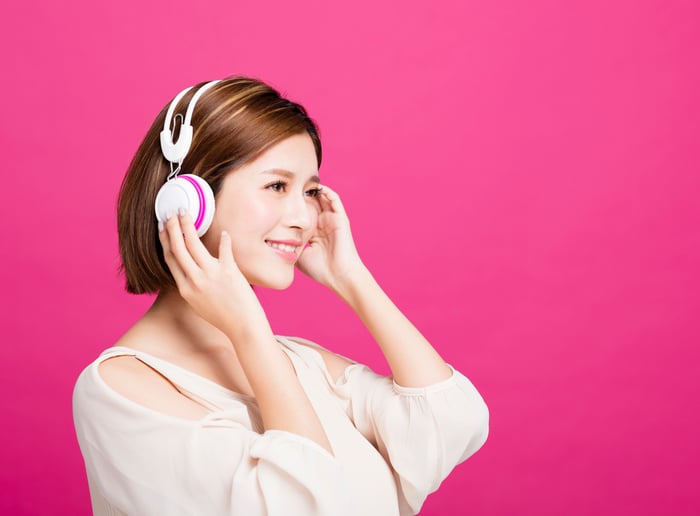 Yet Tencent Music's core business isn't exposed to those headwinds, and the stock looks fairly cheap relative to its long-term growth potential. Should investors ignore the noise and buy this stock?

Tencent Music generates revenue in a different way than Spotify (SPOT 4.00%), Apple (AAPL 4.08%) Music, or Sirius XM's (SIRI 0.79%) Pandora. Spotify and Apple Music mainly rely on subscription fees, while Pandora generates most of its revenue from ads for free listeners.

Tencent Music's online music unit, which was formed by merging China's biggest streaming platforms, generates its revenue from subscription fees, ads, and digital downloads. However, the company's core growth engine is its social entertainment unit, which generates most of its revenue from WeSing -- a live streaming karaoke app that lets viewers buy virtual gifts and concert tickets.

During the first quarter, 28% of Tencent Music's revenue came from its online music business. The remaining 72% came from its social entertainment unit. Here's how those two businesses fared during the quarter.

Tencent Music's annual growth looks robust, but its sequential growth looks less impressive. Its 39% revenue growth during the first quarter also marked a deceleration from its 51% growth in the fourth quarter.

The growth of this business is clearly slowing down, but it's locking in more paid subscribers. Unfortunately, its ARPPU continues to decline, as more subscribers opt for its cheaper tiers -- which cost as little as 12 RMB ($1.75) per month. 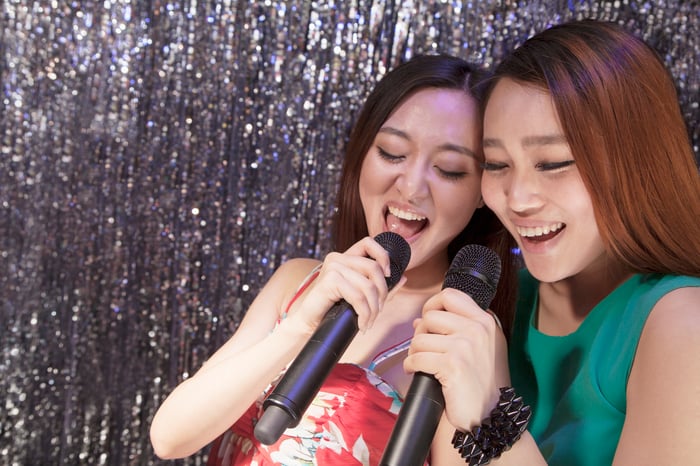 Meanwhile, its social entertainment business's growth is measured by its growth in total paid users, ARPPU, and mobile MAUs.

Once again, it's a mixed bag. The platform's MAU and ARPPU growth seem to be peaking, but it's making impressive progress converting free users to paid ones -- presumably because its top broadcasters are locking in more viewers.

Tencent Music's growth slowed, but so did its spending. Its operating expenses rose just 28% annually during the quarter, which was well below its revenue growth rate. That conservative approach, along with its focus on converting more free users to paid ones, should help the company improve its profitability.

The company didn't provide any exact guidance for the year, but analysts expect its revenue and adjusted earnings to rise 39% and 8%, respectively. But in fiscal 2020, they expect its revenue to rise 35% and for its EPS to more than double -- which is a stellar growth rate for a stock that trades at less than 18 times forward earnings.

Spotify, which owns a big stake in Tencent Music, is expected to remain unprofitable for the foreseeable future. Apple Music also doesn't generate much profit.

A risky but undervalued play

Tencent Music is still a "best in breed" play on streaming music, but it faces two near-term headwinds. First, the escalating trade war will likely pummel most Chinese stocks, regardless of their exposure to tariffs. Second, it's reportedly being probed for antitrust violations in China -- which isn't surprising, since it controls about three-quarters of the country's streaming music market.

Nonetheless, patient investors who are willing to ride out the volatility could be well rewarded as Tencent Music gains more paid users -- which still account for only a tiny sliver of its total MAUs.