This year marks the 66th anniversary of the original frozen TV dinners created by Campbell Soup's Swanson, which made the packaged meals to help working women short on time serve a tasty meal to their families. Now supermarket giant Kroger (KR 1.11%) is bringing the evolution of prepared meals almost full circle, announcing it will be testing new, ready-to-heat meal kits in 68 stores.

Beginning at around $6.50 per meal and taking as little as five minutes to cook, the kits will feature a variety of choices including chicken with broccoli and mashed potatoes, pork al pastor, and bacon mac and cheese. There will also be several mix-and-match offerings including a garlic pork sirloin roast, baby back ribs, smoked turkey breast, sirloin steak, and more. The oven-ready meals start at $8.50 each while the lunch kits are priced at $6. 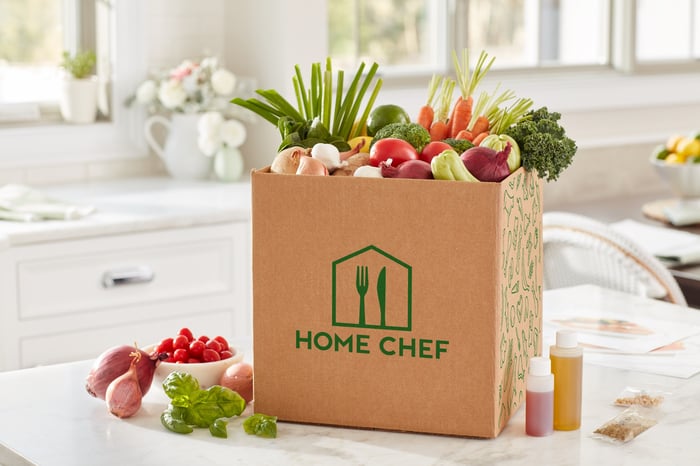 Meals in the making

Popularized by Blue Apron (APRN -7.83%), meal kits have become a billion-dollar industry, with a recent Nielsen report saying 14.3 million households purchased one in the last six months of 2018, at 36% increase from the year before, while 23% of households said they'd consider purchasing one.

And they're tailor-made for millennials who seek out not only convenience in their food purchases, but personalization. It's why 60% of millennials have said they intend to buy a meal kit compared to 31% of baby boomers.

Although most meal kits are still purchased online, the percentage of that occurring is falling, as more people are turning to grocery stores to buy them. In-store, full-meal kit sales surged 51% in 2018, with 7.3 million unit sales recorded, according to Nielsen data.

The knock against meal kits, however, and what has caused a lot of Blue Apron's customer churn, is that they're really not all that convenient. While you get prepackaged, preportioned ingredients, there is still a lot of prep work to be done, a lot of steps to be performed, and a lot of time waiting before the meal hits the table. It's ultimately why many meal kit customers stop buying them. Blue Apron's customer counts fell by 30% in the last quarter to 550,000, about half of what they were at its peak.

Everything old is new again

Kroger is looking to change that. It bought meal kit maker Home Chef a year ago for $200 million as Blue Apron's delivery model fizzled because consumers didn't want to be locked into an expensive menu a week in advance. Having them in the supermarket's refrigerator case meant a meal kit could be picked up on the way home from work, but even then the criticisms about their complexity still deter many.

In addition to its first fully cooked, ready-to-heat meals, the grocery store leader's Home Chef division is also making available new lunch kits that start at $6 and feature a lot of salads and sandwiches, and oven-ready meal kits that are priced at around $8.50 per serving and let time-pressed home chefs pop in the oven ready-to-cook ingredients in an oven-safe container.

Kroger's idea essentially comes back to where Swanson was nearly 70 years ago by turning meal kits into glorified TV dinners, albeit gussied up with fresher, more natural ingredients and sporting a higher price. But by making them pre-cooked and ready-to-heat, Kroger may be able to make meal kits a dinner option for the masses.