Please ensure Javascript is enabled for purposes of website accessibility
Log In Help Join The Motley Fool
Free Article Join Over 1 Million Premium Members And Get More In-Depth Stock Guidance and Research
By Timothy Green – May 14, 2019 at 2:04PM

The retailer will actually save money over two-day shipping thanks to the way the initiative is designed.

Other retailers weren't exactly caught flat-footed, despite all the hype around Amazon's announcement. Target (TGT -1.01%), for example, has been providing free next-day shipping on home essentials through its Restock service for the past year. Target ships those orders directly from its stores, saving the company from needing to invest heavily in distribution centers and saving it money compared to fulfilling orders from its existing warehouses.

Walmart (WMT -0.35%) is now throwing its hat into the next-day shipping ring, taking an approach that's similar to Target Restock, with a few key differences. Surprisingly, Walmart expects the new service to reduce its shipping costs, not raise them. 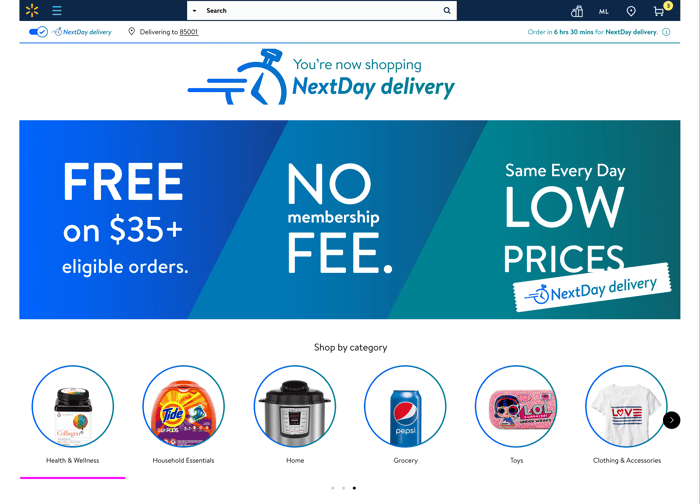 Walmart's NextDay delivery service will be a stand-alone shopping experience that covers around 220,000 items. It includes items that customers frequently purchase, like diapers and laundry detergent, as well as categories like toys and electronics. The assortment is expected to expand over time, and it will vary by customer location.

The service requires a $35 minimum purchase, the same minimum as Walmart's two-day shipping service and Target's Restock service. It will launch first in Phoenix and Las Vegas, and then expand to Southern California soon after. The plan is to offer NextDay delivery in 40 of the top 50 major U.S. metro areas, covering 75% of the U.S. population, by the end of the year.

While offering next-day shipping sounds like an expensive proposition, Walmart has found a way to make it work. "Contrary to what you might think, it will cost us less -- not more -- to deliver orders the next day. That's because eligible items come from a single fulfillment center located closest to the customer," Marc Lore, president and CEO of Walmart eCommerce U.S., explained in the news release announcing the initiative.

All items in a NextDay order will come from the same warehouse close to the customer, which means fewer shipments and shorter distances. This is the same fundamental idea that underlies Target Restock, although Target uses its stores to fulfill orders, while Walmart is using its network of fulfillment centers.

This single warehouse requirement puts a limit on how many items Walmart can offer through this service. Amazon Prime has many millions of available items, so Walmart won't be able to compete in terms of selection. But by focusing on what customers order most often, Walmart is hoping that a few hundred thousand items will be enough.

Walmart may have plans for an even faster shipping service in the future. Lore ended the news release with this: "And, with 90% of Americans living within 10 miles of a Walmart store, we're well positioned to offer even faster delivery to customers in the future." That could imply that a same-day delivery service, fulfilled directly from Walmart's stores, is in the works.

Like Target Restock, Walmart's NextDay delivery service takes a limited approach to next-day shipping. It won't cover nearly as many items as Amazon Prime, and that means it won't work as a viable replacement for everyone. But it allows Walmart to offer free next-day delivery without a membership fee while saving the company money.

It looks like competing with Amazon on shipping speed won't be as expensive as feared for traditional retailers.