Please ensure Javascript is enabled for purposes of website accessibility
Log In Help Join The Motley Fool
Free Article Join Over 1 Million Premium Members And Get More In-Depth Stock Guidance and Research
By John Ballard – Updated May 14, 2019 at 3:50PM

"Apex Legends" could become a $1 billion franchise for the game maker.

To say Electronic Arts (EA -0.43%) hobbled into calendar 2019 is putting it lightly. The game maker had several missteps last year that included cutting guidance twice and a softer-than-expected launch of Battlefield V during the holiday quarter. Consequently, the stock nosedived.

What some investors overlooked, however, is that the video game industry is fundamentally about creativity and innovation, and EA generates more than $1 billion of free cash flow to spend on game development every year.

It can take several years to make a video game. So, even though EA was disappointing investors with its outlook toward the end of 2018, the company was already in the late stages of delivering a new free-to-play shooter that would become one of the most-played games on the market. 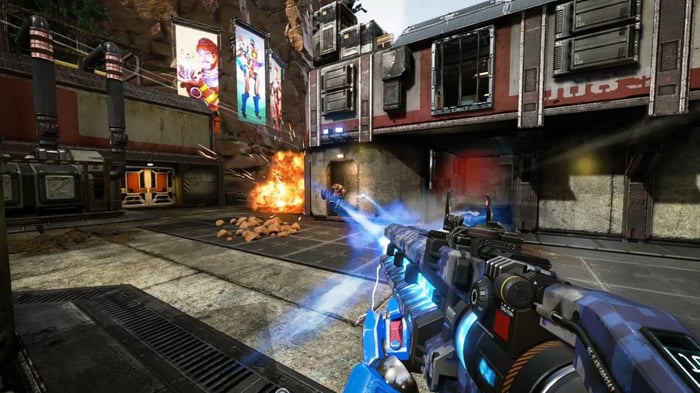 Bring on the moolah

EA reported adjusted revenue of $1.36 billion for the quarter, higher than management's guidance of $1.17 billion. The beat was partly driven by Apex Legends, with the balance credited to EA Sports titles.

Live service revenue, which includes in-game spending for add-on content, increased 24% year over year to $845 million, primarily driven by Apex Legends. Keep in mind, Apex was only available for less than two months during the fourth quarter, which emphasizes how well the title performed financially.

Apex Legends is a fresh take on the battle royale genre. The game has reached more than 50 million players since its release, of whom 30% are new to EA's games. It's clear EA struck the right chord with Apex, and management is already planning to launch the game in new markets around the world to reach an even wider audience.

Specifically, COO Blake Jorgensen mentioned that it is currently in "advanced negotiations to bring Apex Legends to China and to mobile." Mobile could be huge: It's where other battle royale shooters -- Fortnite and Playerunknown's Battlegrounds -- have found tremendous success.

Management expects Apex to generate between $300 million to $400 million in adjusted revenue in fiscal 2020, or about 7% of total adjusted revenue. This outlook could prove conservative, as Apex is EA's fastest-growing franchise in the company's history, and the development team is working on additional content for the game. Plus, the outlook doesn't include any sales from mobile or China.

What's more, management guided for a contribution margin on Apex revenue of 60%. The game is free to play, so all revenue is generated from digitally delivered add-on content that gamers purchase while playing. If the game reaches more players, there is an upside to earnings over the next few years with the game's profit margin this high. A 60% contribution margin means about 10% of EA's operating cash flow could be driven by Apex Legends this year.

Apex's player base will likely keep growing. In addition to a potential release in China, EA is self-publishing Apex Legends in South Korea. Jorgensen said, "The game offers an opportunity for us to build a direct connection with our players there, and we hope to be able to leverage this for other games."

South Korea is an important market for competitive shooters like Apex Legends. The country is considered "the mecca of esports." Some of the world's most talented esports players hail from the country.

It certainly seems the increased investor optimism is warranted. After a decline in adjusted revenue in fiscal 2019, EA expects to return to growth in fiscal 2020. A year ago, the stock was trading for a forward P/E of more than 35 times expected earnings; now it's trading for 19.9 times. EA stock is cheaper, and with Apex Legends, it's in a stronger position to deliver growth compared with this time a year ago.