Please ensure Javascript is enabled for purposes of website accessibility
Log In Help Join The Motley Fool
Free Article Join Over 1 Million Premium Members And Get More In-Depth Stock Guidance and Research
By Danny Vena – May 15, 2019 at 6:11PM

The tech giant is placing increasing emphasis on its Azure cloud platform.

It's no secret that Microsoft (MSFT -1.94%) has its sights set on Amazon (AMZN -1.57%) in the cloud computing space. While Amazon Web Services (AWS) has long held the lead in the area it pioneered, Microsoft's Azure has been gaining ground in recent years.

Microsoft made its intentions clear at this year's Build developer's conference. While in previous years, the spotlight was on consumer products like the Windows operating system and Microsoft's Surface tablets, this year cloud computing took center stage.

The sheer volume of announcements related to Azure sends the message that Microsoft is coming for Amazon. 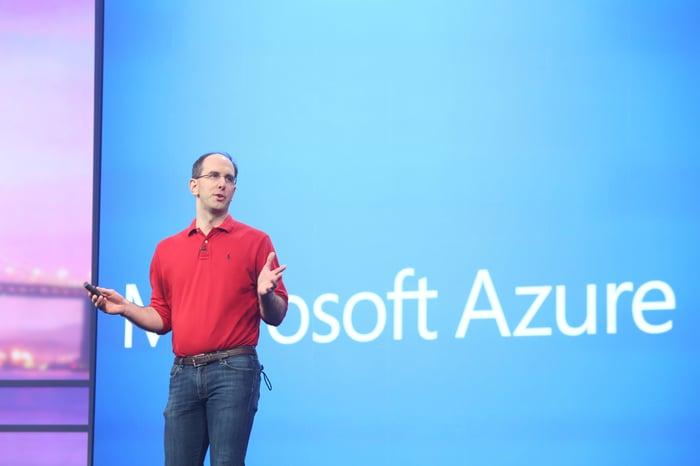 While the company is still very much a consumer-centric operation, much of Microsoft's keynote address was dedicated to its cloud computing platform. To illustrate the change in tone from previous years, Azure was mentioned 283 times in Microsoft's Book of News (a guide to the developer's conference), compared to just 57 instances addressing Windows.

At the event, Microsoft introduced a host of new tools that are making its Azure cloud computing more attractive not only to businesses storing data and managing applications but also to developers. By doing this, Microsoft is positioning itself to continue to gain on its biggest rival.

AWS continued to lead the industry in 2018, with an estimated 32% market share, compared to nearly 17% for Azure, according to market analysis by Canalys. It's telling, however, that while Amazon's share held steady, Microsoft's cloud share increased by more than 3 percentage points year over year, growing from 13.5% of the market to 16.8%.

One recent move in the company's consumer business mimics what it's trying to achieve in the cloud arena. It's long been the industry standard to take a 30% cut of apps sold, with the remaining 70% going to the developer. Microsoft recently changed its long-standing policy and will now allow developers to keep 95% of the revenue from their creations.

While this isn't directly applicable to Azure, it illustrates how the company is courting developers in all areas of its business, drawing them into its ecosystem.

Those looking for evidence of Microsoft's continued rise in the cloud realm need look no further than Microsoft's third-quarter results. Revenue for the quarter grew to $30.6 billion, up 14% year over year, beating both analysts' consensus estimates and the high end of management's guidance. More than half the $700 million increase in revenue came from the company's hybrid cloud business, with continued robust Azure growth, which grew 73% year over year. This growth helped propel Microsoft to be one of only three U.S. companies in history to briefly exceeded $1 trillion market cap.

Stifel analyst Brad Reback was already a Microsoft bull, having raised his price target from $130 to $150 after Microsoft "crushed" its earnings. After attending the Build conference, Reback came away even more confident in his call on Microsoft.

"Azure continues to make meaningful strides closing the functionality and usability gap with [Amazon Web Services]," Reback wrote in a note to clients. "In fact, these same individuals [Microsoft developers] reinforced the idea that Azure's hybrid capabilities remain far ahead of AWS."

Actions speak louder than words, and Azure's continued strong growth and Microsoft's continued emphasis on its cloud business will continue to pay dividends.