Better-than-expected performance delivered by graphics-processing specialist NVIDIA (NASDAQ:NVDA) is pushing its shares higher. On the other hand, social media hobby-site operator Pinterest (NYSE:PINS) reported its first set of figures as a publicly traded company and the reaction was... not encouraging.

Both stocks are trading actively following their respective post-market earnings results. Here are the details. 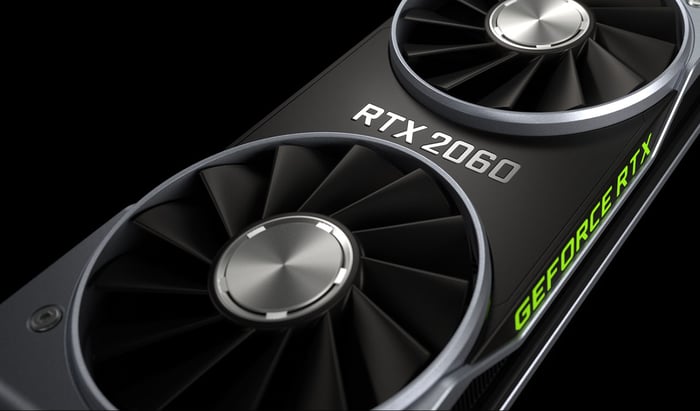 NVIDIA posted some significant declines in important fundamentals in Q1 of fiscal 2020. But you'd never know it from the stock's price rise after market close.

The company took in revenue of $2.2 billion during the quarter, quite a distance below the $3.2 billion it made in the same period last year. This stood to reason: The cryptocurrency market isn't what it once was, and sales have fallen steeply for the company's graphics processors (used to "mine" cryptos, like bitcoin). The current trade war with China, a major market for NVIDIA, is also acting as a damper.

These factors also affected adjusted net profit, which declined sharply by almost 60%, to $543 million ($0.88 per share).

However, on average, analysts were expecting earnings per share (EPS) of only $0.81 and revenue just short of the achieved $2.2 billion. On top of that, NVIDIA's guidance for Q2 of $2.55 billion on the top line also slightly exceeded analyst projections.

There are plenty of reasons to be optimistic about NVIDIA in spite of the declines. It seems to be recovering in its core gaming market, and it's positioning itself as a key player in the connected-car sphere.

Understandably, NVIDIA was one of the most actively traded stocks in the evening hours. At 6:21 p.m. EDT, it was trading 6% higher than its closing market price.

Pinterest reported its inaugural set of quarterly figures following its April initial public offering (IPO). For the company's Q1 of fiscal 2019, it booked revenue of almost $202 million, 54% higher on a year-over-year basis. Adjusted net loss narrowed to a bit over $40 million ($0.32 per share) from Q1 2018's shortfall of nearly $48 million.

Neither result met analyst projections. On average, analysts anticipated only an $0.11 per-share net loss and a top line of just under $201 million.

Despite the promising lift in revenue, the company's costs and expenses increased significantly, by 32%. Pinterest attributed this largely to an increase in its employee numbers.

Pinterest is still in a relatively early stage, but investors may be growing impatient for it to turn a profit. Management hasn't made a convincing case that the company can reliably and robustly land in the black.

Pinterest stock is underwater post-market, trading down by nearly 16%. That said, at $26 and change, it's still comfortably above its IPO price of $19 per share.