Please ensure Javascript is enabled for purposes of website accessibility
Log In Help Join The Motley Fool
Free Article Join Over 1 Million Premium Members And Get More In-Depth Stock Guidance and Research
By Rich Duprey - May 17, 2019 at 4:09PM

A new storage box aimed at a new market could take Yeti to the next level.

If Yeti (YETI -0.37%) ever hopes to be more than a niche business, it's going to have to diversify and expand its product line to broaden its appeal to a wider audience. It will have to go beyond insulated mugs, t-shirts, or hats emblazoned with the Yeti logo, though those will always be useful in its journey as an aspirational lifestyle brand. New products with a functional appeal holds the potential to target those who question why they would ever need a $1,000 ice cooler.

With its new Loadout GoBox 30 gearbox, Yeti may have just taken the first step toward increasing its appeal beyond the narrow confines of the rugged outdoors. 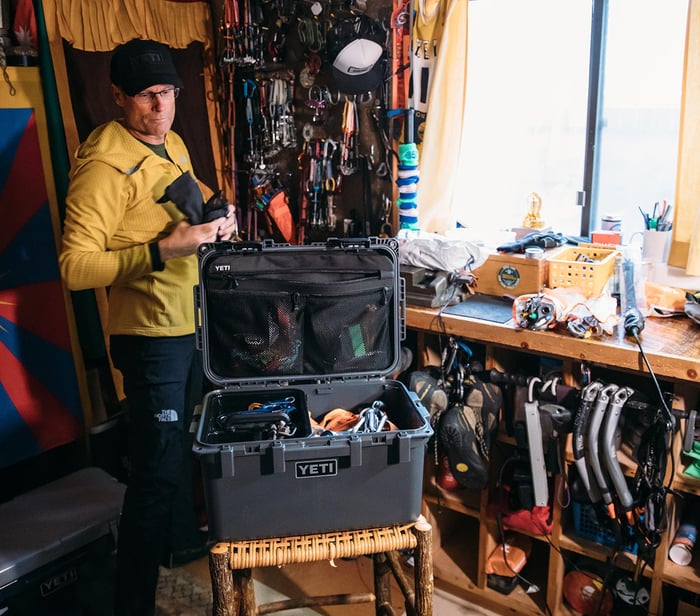 Yeti reinvented the cooler market when it introduced its high-end, nearly indestructible coolers targeted toward hunters, fishermen, and other outdoor enthusiasts. Its hard-case coolers have earned high marks for not only being "bear proof," but also for keeping ice cold for days at a time. But they're also well known for the hefty price tag they come with.

Yeti coolers start at just under $200 for its basic Roadie 20, its smallest unit that can hold 16 cans of beer or 20 pounds of ice, and run as high as $1,300 for the Tundra 350, a cooler that can hold over 10 cases of beer or 316 pounds of ice (you have to love a product that measures performance in units of beer).

In between, you can find an assortment of styles at different price levels, including its Tundra Haul, the first Yeti cooler on wheels that made it a more useful product for people who didn't want to lug their cooler onto beaches or in parks. It goes for $400. There's even an ice bucket, the Tank 45, that sells for $200.

Though these line extensions are helpful in broadening the choices customers have to select from, they still kept their products tailored for the traditional Yeti customer's interests. Which is why the GoBox is a potentially important new item for the company.

Thinking outside the storage box

The LoadOut GoBox is a waterproof, dustproof trunk that's just as tough, durable, and nearly as indestructible as its cooler brethren, and it lets you keep your gear organized, secure, and safe. Yet as Yeti also notes, "just don't expect it to keep your beer cold." It's a storage box that has the potential to appeal to more than just hunters and outdoor enthusiasts as it can also be used to store work gear, tools, and other items.

The drawback, of course, is price. It starts at $250, which is about 10 times more expensive than gear storage boxes you can buy at big-box stores. But those lesser trunks would have a hard time keeping your gear dry for extended periods of time, so knowing your equipment is safe during a weekend of camping, or just while it sits in your truck bed, may justify the higher cost for many.

Admittedly, this high-priced protection may be excessive but it opens up the opportunity for Yeti to begin exploring other ways it can reach more consumers.

Smaller toolboxes, for example, might allow it to reach out to craftspeople and those in the trades, as might truck bed storage boxes. Yeti-branded tonneau covers could find wide acceptance among pickup truck owners because of the safety and security the Yeti name carries. Would a Yeti hard-body suitcase be overkill? Maybe, but thinking about all those old luggage commercials with a gorilla throwing bags around, it's not hard to imagine a Yeti bear-proof rating could find a similar audience.

If Yeti starts thinking about how it can apply its manufacturing technology to more than just storage containers, it can further extend its reach down into the general public -- as it's done with its drinkware and cooler accessories.

Yeti's management is already committed to moving the brand beyond its southern and southeast reputation, and it has a 21,000-square-foot innovation center to come up with new ideas.

Yeti, having elevated the simple cooler to something more than a cheap, disposable item, created a whole new market. But it is one that is limited, since coolers from rivals like Coleman and Igloo are more than satisfactory for broad swaths of the general public to use.

The LoadOut GoBox could be where Yeti starts to build on that legacy and reputation, expanding the addressable market by making its products more accessible. Not even necessarily based on price, since consumers are willing to pay up, but in utility. There are only so many people willing to pay big bucks for a cooler to keep their ice cold for three days, but millions more who need secure gear storage, toolboxes, and maybe even suitcases that could help Yeti grow both its top and bottom lines.