Please ensure Javascript is enabled for purposes of website accessibility
Log In Help Join The Motley Fool
Free Article Join Over 1 Million Premium Members And Get More In-Depth Stock Guidance and Research
By Dan Caplinger – May 20, 2019 at 12:02PM

A controversial topic affects some industries more than others.

Investors, politicians, and the public at large have all paid a lot more attention to stock buybacks over the past couple of years. Given rising income inequality and the recent cut in corporate tax rates, many people are outraged at the idea that businesses would return capital to their shareholders rather than spend more on internal expansion efforts or reward employees with higher compensation.

Indeed, the bull market over the past 10 years has led to an unprecedented amount of money being spent on company stock. As of the end of 2018, companies in the S&P 500 had deployed more than $4.7 trillion in capital toward repurchasing shares since the beginning of 2009, according to S&P Dow Indices data compiled by Yardeni Research. Yet as you can see below, the bulk of that buyback activity has come from only a few select sectors within the stock market. 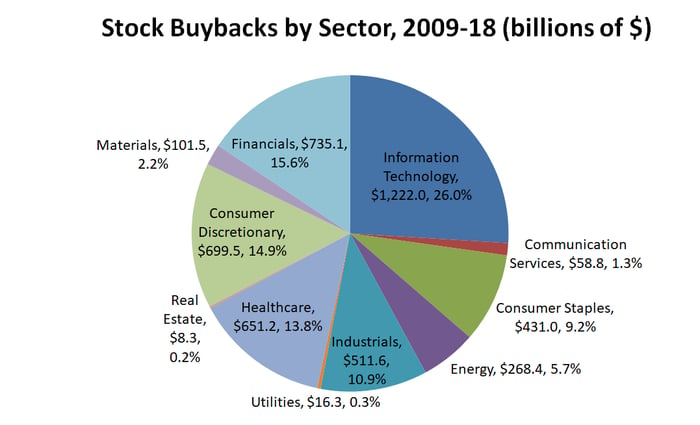 Just four sectors -- information technology, financials, consumer discretionary, and healthcare -- account for more than 70% of all buyback activity over the past decade. By contrast, when you look at real estate, utilities, communication services, materials, and energy stocks, they combine for less than 10% of the total.

That's not terribly surprising, given the relative performance of the industries in question. Technology has boomed over the past 10 years, and changes in tax reform have made overseas profits available to U.S. companies in the sector to use for buyback activity. Similarly, financial stocks have come back from the brink of collapse to become healthy businesses once again. Bank regulators seem to prefer that financial institutions implement share repurchases in order to give back excess capital to shareholders rather than making dividend increases that they could need to take back during times of financial stress.

By contrast, lagging sectors have more important capital needs than buying back stock. Utilities and communication services companies have to spend huge amounts of money to maintain or upgrade their infrastructure assets. Meanwhile, materials and energy stocks have had to deal with relatively poor price environments that have forced them to conserve capital.

Some sectors are better at producing free cash flow than others, and where there's cash, you'll find buybacks. Absent moves from legislators to curb the amount of money businesses spend on share purchases, investors can expect certain key industries to produce the bulk of buyback activity for the foreseeable future.