Goldman Sachs (NYSE:GS) is a company in transition.

For many years, Goldman was the whitest of the white-shoe investment banks, the broker and dealmaker making fat profit margins. Lately, though, iot has been channeling its efforts into products and services outside of its traditional investment banking core. There have been some growing pains in this shift, and the company's share price has been stagnant for months, partly as a result. But perhaps this means its stock is now a bargain.

Marcus is your lender

As lucrative as it can be, investment banking is a lumpy business. Trading operations depend on the markets, and these can be hot or not. Many other components of an investment bank are centered on deals (underwriting, mergers and acquisitions, etc.), and these activities tend to be feast or famine.

Goldman's aim over the past few years has been to diversify away from this and into steadier businesses. It basically started with the founding of Marcus, the retail bank that kicked off operations in 2016. Although strictly an online bank, Marcus offers many of the same services as traditional bricks-and-mortar lenders. More recently, Goldman bolstered its wealth management capabilities by acquiring privately held United Capital.

It's also dived into the credit-card sphere in an interesting way, teaming with Apple to offer an Apple-branded card.

The directions in which Goldman is diversifying are relatively resource-light -- a nice advantage. A commercial bank's foundation is its deposit base, which is very low-cost (Marcus' savings account offers an interest rate of 2.25% -- high in today's environment). Wealth management units are usually relatively small, but they can generate significant fee revenue. And a well-managed card portfolio can be a fine profit center for issuers.

For what a fully realized diversification initiative might eventually look like, consider JPMorgan Chase (NYSE:JPM). In 2000 Chase Manhattan scooped up J.P. Morgan & Company, which at that point was basically an investment bank. These days, JPMorgan Chase is a behemoth -- a major player in nearly every finance sector segment imaginable, from mortgages to securities trading to credit cards.

Bank of the future?

Goldman Sachs is still quite far from being JPMorgan Chase. Securities trading, by far the company's largest single activity, was responsible for over 40% of Goldman's first-quarter revenue.

The problem with this is the aforementioned volatility, which was down in that quarter compared with the first quarter of 2018. This meant an 18% decline in the unit's top line. As trading goes, so goes Goldman Sachs' overall company revenue -- it suffered a 13% drop during the quarter, and came in below analyst expectations.

Marcus has been a hit, but it's still a niche player. I don't know if Goldman Sachs will ever rise to become a JPMorgan Chase type of lender with muscular traditional banking arms. This wouldn't only help smooth out its earnings. It might also give the stock price some juice, since investors like some predictability, especially with financial sector stocks.

Goldman is a clear laggard, as you can see in the stock price chart comparing its performance with that of the "big four" lenders. Only scandal-prone Wells Fargo (NYSE:WFC) has a worse showing. 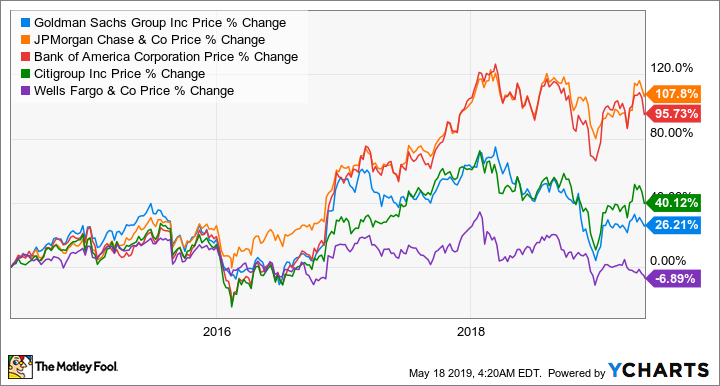 In spite of that, it actually trades at higher profitability valuations than the quartet of giants. Goldman's price/earnings-to-growth ratio is estimated to be 1.4. Although that's certainly not bad, it's notably above JPMorgan Chase's 1.1, and far higher than the 0.5 currently sported by both Bank of America (NYSE:BAC) and Citigroup. Unloved Wells Fargo is just under 1.

Meanwhile, all of the big four except for Bank of America have dividend yields above 2.5%; Goldman's is only 1.7%.

Although I like the strategic direction in which Goldman is moving, these numbers don't make its stock compelling. True, if anyone can build a huge, robust omni-service finance and banking business, it's Goldman. But the company is still quite some distance from that, and on current valuation levels -- not to mention the dividend -- it's comparatively too expensive for such a gamble. So it's not a buy for me now.