Please ensure Javascript is enabled for purposes of website accessibility
Log In Help Join The Motley Fool
Free Article Join Over 1 Million Premium Members And Get More In-Depth Stock Guidance and Research
By Daniel B. Kline - Updated May 20, 2019 at 3:44PM

Small secrets may not be a big deal, but larger ones can cause major problems.

Sneaking a burger and fries that you don't tell your significant other about may not be as big a financial secret as buying a big-screen television or having a spa day that's not discussed beforehand. There's a difference between sneaking in a small, relatively inexpensive indulgence and laying out major cash for a purchase that you possibly can't afford or that your partner would prefer you don't make.

Financial infidelity works a lot like regular infidelity. Your significant other may ignore it when you give a quick glance to an attractive person who walks by, but may not take as kindly to you chatting him or her up in a bar. That's basically the difference between buying a fast-food meal that you're not supposed to and going on a secret gambling spree. 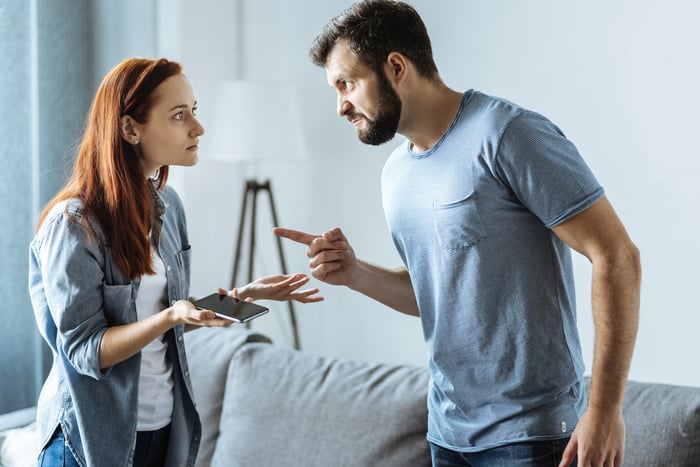 How are people financially cheating?

"Proportionately speaking, women were more likely to conceal purchases in the categories of fashion and beauty, while men went undercover about their alcohol, drug, and video game purchases," according to a new survey from Areavibes.com. "Both demographics frequently kept fast food expenditures from their partners as well."

Here's a look at how men and women kept their spending secret in categories where the amount of money spent topped $100. The dollar amount listed is the average amount spent between both genders:

In a broad sense, men generally keep bigger secrets, but women are more likely to hide spending on clothes, jewelry, shoes, and beauty items. The majority of survey respondents (58% of men and 53% of women) said that they kept spending hidden for fear of their partner's disapproval.

"On the whole, women more frequently expressed feelings of shame and a need for privacy, while men reported not wanting to damage their relationship or hurt their partner's feelings," the report found.

Couples have a better chance of keeping their relationship intact if they're honest with each other. Doing this means discussing finances and deciding what types of purchases need mutual approval and what types don't.

Exactly where that line falls will vary based on finances. A young couple saving for a house or one struggling to make ends meet might consider buying lunch out an extravagance, while a more established, better-off pair may not even consider an expensive dinner worth discussing.

If you have discretionary income, it's a smart idea for each member of a couple to have a pool of money each week to spend at will. That might be a small amount that goes to lattes or a drink after work, or it might be a more generous amount that pays for electronics or a new pair of shoes.

The most important thing for couples is to keep an open and honest dialogue. That doesn't mean every purchase needs to be discussed. If one of you wants a fast-food meal and feels a little shame about it, that's very different from hiding a $350 gambling spree or buying pricey shoes that you pretend you found in a thrift store.

Be honest and talk often. Know where your finances stand, and discuss where your money is being spent. That should help you keep a healthier and (mostly) secret-free relationship.