Yesterday, T-Mobile (NASDAQ:TMUS) and Sprint (NYSE:S) inched closer to securing one key approval in their bid to merge, a $26 billion deal that would reduce the number of national wireless carriers from four to three. Federal Communications Commission Chairman Ajit Pai expressed support for the transaction after both companies agreed to certain commitments regarding rolling out 5G, as well as a concession for Sprint to sell off its Boost Mobile subsidiary. Commissioner Brendan Carr also released a statement of support yesterday morning, signaling two likely favorable votes.

A few hours later, Commissioner Mike O'Rielly tweeted that he is now "inclined to support" the merger. That makes three commissioners that appear poised to vote in favor of the deal.

We are honored to have your support Commissioner @mikeofcc. We look forward to the opportunity to deliver #5GforAll to benefit consumers across the country! 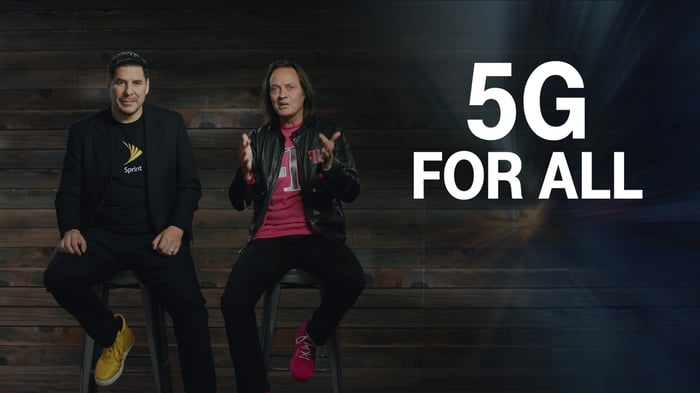 T-Mobile and Sprint argue that the merger will accelerate the rollout of 5G. Image source: T-Mobile.

The FCC will officially vote on the merger on June 15, but T-Mobile and Sprint now appear to have secured the necessary votes to clear at least that regulatory agency.

After the FCC news broke, reports emerged that the Department of Justice is still skeptical, according to Bloomberg and The Washington Post. The merger still needs to be approved by the DOJ's antitrust division, and its chief, Makan Delrahim, is not satisfied with the new commitments and concessions, according to the reports. Delrahim led the agency's efforts to block AT&T's acquisition of Time Warner, which was cleared last summer after courts sided with the telecommunications giant. (The DOJ subsequently appealed and lost.)

The agencies are scrutinizing different aspects of the proposed megamerger. The FCC is mostly concerned with whether the deal is in the public interest from a perspective of improving telecommunications infrastructure, coverage, and technical innovation. The DOJ is focused on the effects on overall competition, including potential price impacts on consumers.

While the DOJ's pending decision is the pivotal question mark, T-Mobile and Sprint remain optimistic that the merger will pass regulatory scrutiny. Robert McDowell, T-Mobile's outside regulatory counsel, told Fox Business that he still expects the DOJ to "give this a green light."

Many thanks to @LizClaman & @CGasparino of @FoxBusiness for a great conversation about @TMobile @sprint combo & #5G. I'm optimistic about @TheJusticeDept & remaining states green lighting the deal bc conditions should allay their concerns & it's ultimately good for #consumers.

"We expect to receive federal regulatory approval in the first half of 2019," T-Mobile wrote in its most recent quarterly filing.