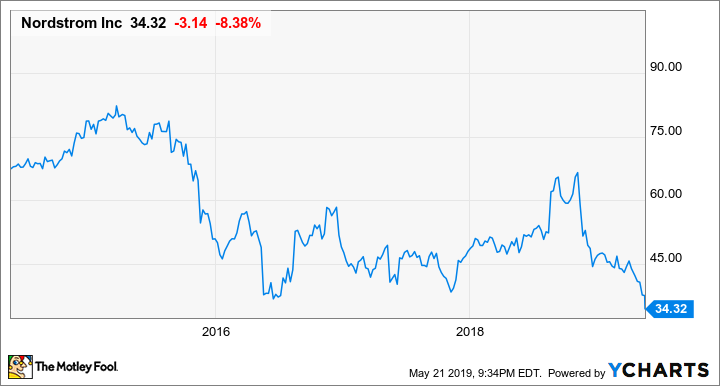 That said, identifiable execution issues drove the bulk of the sales decline last quarter. Moreover, several key sales and earnings growth drivers will kick in over the next couple of years. As a result, the recent slump in Nordstrom stock represents an excellent buying opportunity for long-term investors.

Nordstrom follows a bad quarter with an even worse one

As of late February, Nordstrom executives expected some of the sales softness experienced in the fourth quarter to carry through to the first quarter. Unfortunately, sales trends deteriorated even further. Net sales fell 3.5% last quarter, whereas analysts had expected fractional growth. Off-price sales slipped 0.6% year over year, while full-price sales plunged 5.1%. In-store sales declined at an even faster rate, partially offset by a 7% increase in digital sales.

Management claimed that three factors caused the sales slowdown. First, Nordstrom updated its loyalty program last fall, offering greater rewards, particularly for its best customers. However, the retailer miscalculated by moving its "Nordstrom Notes" rewards to an all-digital format. Some customers -- presumably older ones in particular -- strongly prefer to receive their rewards by mail. As a result, the loyalty program transition hurt traffic and sales last quarter.

Second, Nordstrom cut back on digital marketing in favor of investing in the loyalty program. Given the problems with the loyalty program updates, this bet clearly didn't work. Third, the company made some merchandise mistakes, particularly in the women's apparel business.

Slow sales aggravated the seasonal weakness in earnings that is typical of the first quarter. Gross margin declined to 33.5% from 34.1% in the prior-year period, while selling, general, and administrative expenses rose to 34% of revenue, from 32.3% a year earlier. This caused operating profit to fall about 50% year over year and earnings per share to plunge to $0.23 from $0.51 in Q1 2018, missing the analyst consensus of $0.43 by a mile.

Guidance comes down, too

Management expects the sales weakness to carry over into the second quarter, as it will take some time to fully address the drivers of the recent weakness. So, operating profit will continue to fall -- albeit hopefully at a slower rate as Nordstrom's expense cuts gain traction.

Nordstrom is projecting that sales trends will improve in the second half of the year. However, profitability may remain under pressure in the third quarter -- due to pre-opening costs related to the company's Manhattan flagship store, which will open on Oct. 24 -- before rebounding in the fourth quarter.

The opportunity is still there

As disappointing as Nordstrom's quarterly results and guidance cut were, the company still has a decent chance to achieve its long-term sales growth and margin expansion targets -- driving a rebound in Nordstrom stock. First, Nordstrom is tracking ahead of its initial expense reduction plans, so it won't need as much sales growth to achieve its earnings goals.

Second, Nordstrom sees a $700 million-plus full-price revenue opportunity in Manhattan, where it is just scratching the surface so far with the men's store it opened last spring. The main flagship store and two supporting Nordstrom Local service hubs will unlock most of that opportunity, driving gains in both in-store and digital sales. That will put Nordstrom in the black in Manhattan, reversing several years of losses related to pre-opening expenses.

Third, three long-term growth initiatives -- the online off-price business, the Trunk Club personal stylist service, and Nordstrom's expansion into Canada -- are set to reach scale in the next few years. Collectively, those businesses have been losing over $100 million annually recently, but they should reach breakeven by 2022.

Finally, the issues that hurt sales last quarter should be fixable within a few quarters. As a result, Nordstrom could return to strong profit growth beginning next year. Nordstrom's stock buybacks could amplify the effect of that profit rebound on EPS.