There's good news in the fight against cancer. While the disease continues to affect way too many people across the world, innovative companies are making progress in more effective ways to diagnose and treat cancer. And many of these companies present great opportunities for long-term investors. 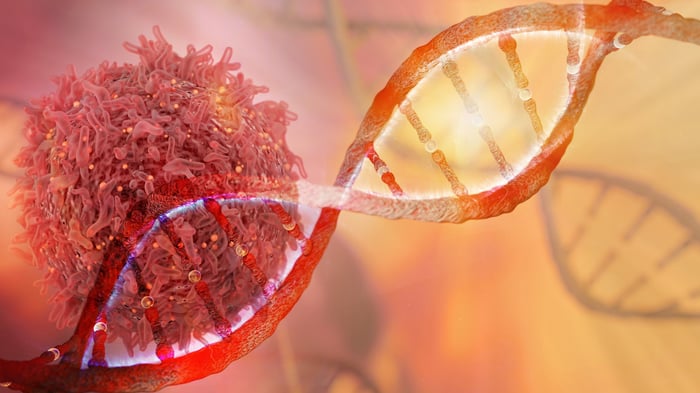 How designer cancer treatments know what to design for

What many of those treatments have in common is that they require genetic testing in order to be appropriate for the patient. That's where Genomic Health shines. The primary goal of this genetic testing company that has worked with over a million cancer patients is to help match them with personalized treatments that ultimately improve their outcomes.

That market position central to so many modern cancer treatments makes Genomic Health worth considering in general. What makes it worth considering right now is the fact that its shares are down recently, based on good news. In a nutshell, it delivered strong results but didn't guide earnings up, spooking investors into thinking that the rest of the year wouldn't be quite as strong.

So now you have a situation where the company trades at around 35 times its anticipated forward earnings. While not a bargain basement find, it's also not outrageous for a company in the middle of the cancer treatment revolution whose earnings are still expected to grow at a nearly 15% annualized rate over the next five years.

A three-pronged attack on cancer

Keith Speights (Illumina): You might not think of Illumina as a stock to buy for cancer treatment. But the gene sequencing leader actually is a major player in the fight against cancer in three key ways.

Don't be fooled by Illumina's Q1 lull in revenue and earnings growth. Sales momentum should increase in the second half of 2019 as big population-genomics initiatives ramp up and customers spend more before their fiscal years wind down.

More importantly, Illumina's long-term prospects are really good. Genomics will become much more crucial in understanding rare and undiagnosed diseases. Consumer genomics products such as ones offered by Ancestry.com and 23andMe -- both of which are customers of Illumina -- will likely increase in popularity as more health-related genetic attributes can be identified. The explosion in personalized medicine and the tremendous potential for liquid biopsies could also be even bigger catalysts for Illumina in the future.

In HER2-positive metastatic breast cancer patients previously treated with anti-HER2-targeted therapies, margetuximab improved progression-free survival (PFS) versus Herceptin when added to chemotherapy. Specifically, the median PFS was 5.8 months versus 4.9 months in the Herceptin arm of the study. Also, PFS was 6.9 months versus 5.1 months for Herceptin in those with the CD16A 158F allele, a particularly tough-to-treat subgroup.

MacroGenics' data also hinted at an overall survival (OS) advantage. Although OS data is still maturing, OS was prolonged by 1.7 months in 158 patients at the primary PFS data cutoff. It was also prolonged by 6.8 months in the CD16A 158F allele population.

The data is going to be discussed in more detail in an oral presentation on June 4 at ASCO. While there's no telling how people will react, it could make sense to get out in front of the event by buying some shares now.