Seeking to further expand its network of devices based on artificial intelligence (AI), e-commerce giant Amazon.com (NASDAQ:AMZN) is working on a voice-activated wearable device that can sense human emotions, according to a report by Bloomberg that relied on an anonymous source. The device will have microphones, similar to the company's Echo smart speakers, but would be paired with a smartphone app and judge the wearer's emotions using clues from the person's vocal patterns.

If the technology comes to fruition, the gadget could help Amazon expand its ecosystem of Alexa-based devices. 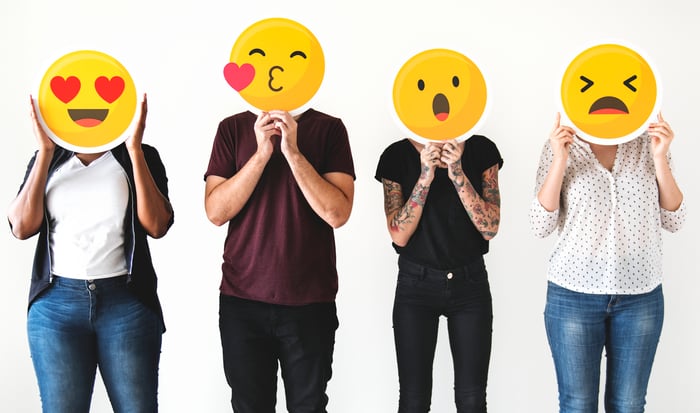 A U.S. patent filing by Amazon from 2017 offers clues about how the technology could be used. Software combined with AI-based algorithms could be used to analyze the user's voice data for insight into how they're feeling. The product, which is still in development, would distinguish between such emotions as "joy, anger, sorrow, sadness, fear, disgust, boredom, stress, or other emotional states," according to the patent application.

A hand-drawn diagram that was included with the patent filing shows a woman saying "Alexa, I'm hungry," while coughing and sniffling. An Alexa-based Echo smart speaker in the room detects that the woman is sick and asks, "Would you like a recipe for chicken soup?" The device later suggests ordering cough drops with one-hour delivery.

The filing also says that the algorithms would take into account such diverse factors as the user's age, gender, ethnicity, as well as their emotional state, before making suggestions.

The attempt to recognize human emotions is a collaboration between the team that handles Alexa's software development and Amazon's Lab126 -- the group responsible for the Kindle, the Echo smart speaker, and the Fire phone.

The project, code-named "Dylan," is reportedly in beta testing, but it currently isn't known if a product will eventually become commercially viable or if it will be made available to the public. When asked about the device, Amazon responded, "We do not comment on rumors or speculation."

There would be a surprising number of use cases for a device that could judge the user's emotional state. In addition to suggesting chicken soup and cough drops for a cold, the device might suggest music purchases to fit the wearer's mood or potentially recommend a delivery of ice cream if the user has recently broken up with their partner. The product could also play from a list of romantic or emotional music based on how the wearer is feeling at the time.

A culture of experimentation

Amazon CEO Jeff Bezos has long encouraged the company's employees to be open to both experimentation and failure. In Amazon's 2015 shareholder letter, Bezos said, "I believe [Amazon is] the best place in the world to fail (we have plenty of practice!), and failure and invention are inseparable twins." He went on to say that this willingness to accept failure was one of the areas that set Amazon apart from other companies.

This latest project could end up on the scrap heap of failed experiments or be Amazon's next multi-billion-dollar idea. Only time will tell.