The latest data for the smart-speaker market was just released -- and things are looking great for Amazon.com (NASDAQ:AMZN). The company's Echo devices hold about 70% of the market right now, which is about what they had at the end of 2017. Meanwhile, Alphabet's (NASDAQ:GOOG) (NASDAQ:GOOGL) Google Home devices have just 24%, and Apple's (NASDAQ:AAPL) HomePod is far behind with only 6% of the market, according to data from Consumer Intelligence Research Partners (CIRP).

These market percentages don't include third-party and off-brand speakers, which hold a small percentage of the market. CIRP says that when these vendors are included, the market shares for Amazon, Google, and Apple would change slightly, but not significantly.

This growth is good for all of the smart-speaker players, of course, but there are a few reasons Amazon's lead is particularly valuable to the company. 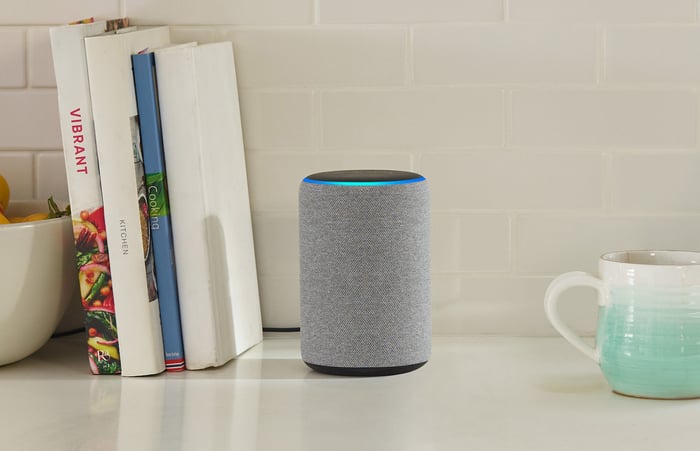 Even though these are still the early days of the smart-speaker market, Amazon has already managed to use its speakers to grow its top line. Echo owners spend, on average, about $700 more every year than Amazon customers who don't own one, and $400 more annually than Amazon Prime members without an Echo. That's because Amazon makes it easy for users to reorder items with simple voice commands to their Echo device, or initiate new purchases with just a few words. With Echo devices always listening, it's easy for users to add items to their Amazon cart.

The great news for Amazon, and Google to an extent, is that U.S. consumers are not only ramping up their smart-speaker usage, but they're also starting to buy more than one device for their homes. At the end of 2017, just 18% of U.S. households with a smart speaker owned multiple devices; now that percentage is up to 35%.

With Amazon dominating in smart speakers and more devices coming into users' homes each year, it has a lot of potential to drive additional sales from its e-commerce platform. In fact, RBC Capital estimates that Echo devices will add $10 billion to Amazon's revenue by next year.

Additionally, grabbing a significant piece of the smart-speaker market automatically puts Amazon at the top of the smart-home space, which itself will be worth an estimated $151 billion by 2024. Amazon's Echo devices can be used as smart-home hubs for other devices -- like alarms, lights, and door locks -- and as this market grows, it could further lock users into Amazon's ecosystem and make its Echo devices even more lucrative.

Amazon's early moves into the smart-speaker market have certainly paid off, and the company is already reaping the benefits through additional e-commerce sales. But I think investors should continue to watch this space closely because Amazon could benefit from more than just online sales.

The company is no doubt collecting data about what its customers are purchasing through their Echo devices, when they're doing it, how much they spend, and so on -- and all this data is valuable to the company's budding advertising business.

Investors should remember that Amazon's Echo devices are more than just novel consumer devices designed for asking questions -- they're cash cows that will help drive more revenue for years to come.