Amazon (NASDAQ:AMZN) and Walmart (NYSE:WMT) have gotten a lot of attention with their plans to offer one-day shipping. While they're battling over that, Target (NYSE:TGT) has quietly built an impressive business offering same-day delivery.

The retail chain saw same-store sales grow by 2.7% in the first quarter while comp digital sales jumped by 42%. That added 2.1% to the company's comps growth, according to CEO Brian Cornell's remarks during the Q1 earnings call.

"We're seeing a really positive guest response to our same-day digital fulfillment services, which drove well over half of our digital sales growth in the quarter," said Cornell. 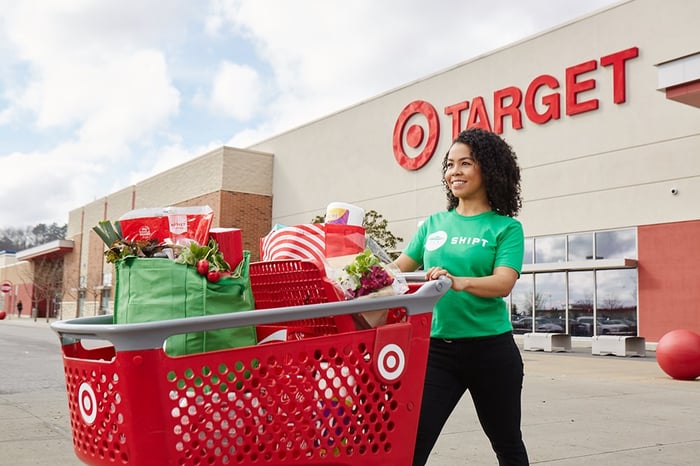 Target offers same-day digital delivery through Shipt, a company it acquired in 2017. The service delivers groceries in as fast as an hour for either $8.25 a month (on an annual plan) or $14 a month for people paying monthly. The selection is limited to groceries -- you can't buy a shirt or a table -- but it's an impressive array of products that can be ordered for faster delivery than Amazon or Walmart offers.

"Our ability to offer these same-day services which deliver high-level satisfaction is a result of our strategy to put stores [at] the center of fulfillment," Cornell said. "In fact, our stores handle more than 80% of our first-quarter digital volume, including all of our same-day options combined with digital orders shipped directly from stores to guests' homes."

Basically, Target has leveraged an asset that Amazon does not have -- its network of stores -- to use as a base of operations. Those stores, which blanket the country, allow the company to offer one-day shipping in over 200 markets across 46 states.

Walmart could, in theory, do the same thing since it has an even larger store network. Amazon can't follow, as its network of distribution centers and Whole Foods stores does not have anywhere close to the footprint either of its rivals' stores offers.

It's also worth noting that Shipt, while being owned by Target, isn't only delivering from its parent company. Shipt members can order from partner chains as well.

"At Shipt, we continue to grow the number of marketplace participants, driving scale and relevance of the platform. In the first quarter, both CVS and Petco launched nationwide on the Shipt marketplace," Cornell said.

What's next for Target?

Target has owned Shipt since 2017, but the chain has not gotten anywhere near the publicity that Amazon and Walmart get for their shipping efforts. This is limited same-day delivery, but grocery is a huge category (since it includes anything a supermarket might sell), and it's a base that the company can add to, depending on consumer demand.

COO John Mulligan noted during the earnings call that the company has over 100,000 Shipt shoppers delivering orders. That's a number, he noted, that's still growing as the company adds new markets. It's also offering variants on the service that meet consumer needs in specific markets.

"In dense urban areas, where we're building small-format stores, we offer a service in which guests who shop in-store can ask us to hold their basket at checkout and deliver to their front door later that same day in a time window of their choosing," Mulligan said. "... Average basket size on these orders is more than five times bigger than the average for these locations, and they include a very strong mix of items from our home category."

That's a variant on the model that makes sense in certain stores. All of this shows that Target isn't focused on keeping up with Amazon and Walmart. It's actually leading the way without doing exactly what its rivals are doing.