Please ensure Javascript is enabled for purposes of website accessibility
Log In Help Join The Motley Fool
Free Article Join Over 1 Million Premium Members And Get More In-Depth Stock Guidance and Research
By Steve Symington, Chris Neiger, and Keith Noonan - May 24, 2019 at 7:39PM

These three stocks could be a great place to put your nest egg to work.

When it comes to investing, retirees understandably want to not only preserve the money they've accumulated, but also generate income from that money in the process, if possible.

Buying and holding high-quality dividend stocks can serve both goals. So we asked three Motley Fool contributors to each find a dividend stock they think is ideal for retired investors. Read on to learn why they chose Realty Income (O 1.25%), Retail Opportunity Investments (ROIC -1.75%), and Apple (AAPL 0.17%). 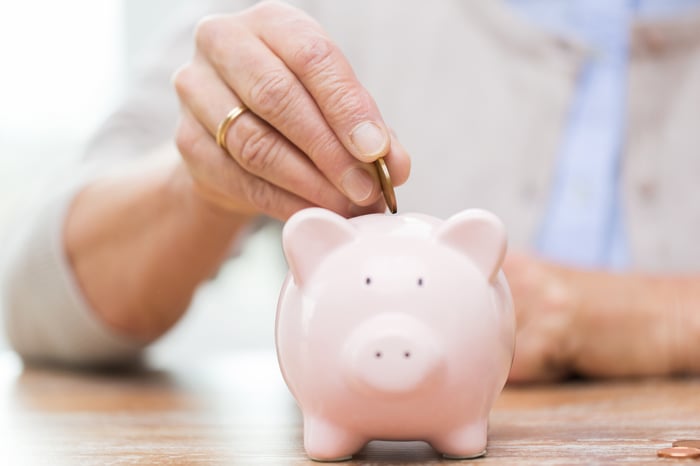 Keith Noonan (Realty Income): Even among the field of high-yield stocks with strong dividend-growth track records, Realty Income has appealing characteristics that make it an especially good fit for retirees. The company is a real estate investment trust (REIT), which means that it generates income from rental properties it owns and has to abide by certain industry-specific operating and accounting regulations. Some of those regulations dictate that Realty Income has to pass profits along to its shareholders, but they don't guarantee that there will be profits over the long term. Thankfully, the trust's outlook remains promising.

Realty Income leases commercial retail properties to a wide range of business tenants and has more than 5,800 properties under long-term net lease agreements and an occupancy level north of 98%. While the overall brick-and-mortar retail industry is being pressured by e-commerce, Realty Income's tenant base consists of operators of gyms, gas stations, movie theaters, budget outlets, and pharmacies. These businesses will likely be relatively resilient, despite the rise of online retail, and keep Realty Income's portfolio in good shape.

As a REIT, Realty Income is required by law to return at least 90% of its earnings to shareholders in the form of cash dividends. The company has paid a dividend for 584 months straight and raised its payout in 86 consecutive quarters. Realty Income also cuts checks to shareholders on a monthly basis, a characteristic that provides a dependable supplement to Social Security income and could make budgeting easier and more flexible for retirees.

The REIT sports a chunky 3.9% yield and has a favorable outlook for steadily increasing payouts, thanks to its sturdy portfolio of properties. This makes Realty Income stock a smart fit for retirees.

Steve Symington (Retail Opportunity Investments): If you're interested in a more niche real estate investment trust with an even higher payout (equating to an annual yield of roughly 4.5% at today's prices), consider Retail Opportunity Investments, which specializes in buying and revitalizing necessity-based retail properties in the western regions of the United States. That typically means that each property in its portfolio of 89 shopping centers is anchored by a popular grocery chain or other necessity-based store, which -- as online retailers continue to gain steam -- helps ensure a steady stream of foot traffic and sales for its other tenants. And its CEO is industry veteran Stuart Tanz, who previously shepherded Pan Pacific Retail from its $146 million initial public offering to a $4.1 billion acquisition by Kimco Realty in 2006.

That said, ROIC shares have hovered in a relatively narrow range for the past year or so given uncertainties plaguing the property-acquisitions market. But in the meantime, the company has taken the opportunity to strategically divest non-core properties as it prepares for the market to take a more favorable turn.

For retirees or any income-seeking investor willing to collect that dividend and watch as Tanz positions the company for longer-term shareholder value creation, Retail Opportunity Investments is as intriguing a buy as our market has to offer.

This tech stock isn't done yet

Chris Neiger (Apple): I don't blame you if you're skeptical about seeing Apple on this list. After all, sales from the company's most significant revenue segment -- its iPhone sales -- have been sliding for a while now, and the company has lost of much of its luster as an innovator.

But overlooking Apple's stock right now could be a big mistake. The company is in the midst of a transition away from hardware sales to its services business -- and it's just getting started. The company is building on its current services (Apple Pay, the App Store, Apple Music) and has added (or is adding soon) new services including Apple News+, Apple Arcade, and Apple TV+.

The company is already starting to see some positive results from its services business: Apple Music now has more paying subscribers in the U.S. than Spotify. Most importantly, service revenue in the most recent quarter jumped 16% year over year and now accounts for nearly 20% of Apple's total sales. That's up from 16% of sales in the year-ago quarter.

Apple is at the same point Microsoft was several years ago as it was transitioning away from traditional software sales to cloud-computing services. It took Microsoft a while to get things right, and it took a few stumbles in the mobile market before it finally found its niche in the cloud. Apple has a massive user base of billions of devices and has already proved it can make money from services. As more services come online, there's plenty of opportunity in the coming months and years.

Apple's dividend of 1.46% isn't as high as some other stocks, but consider that the company has consistently raised its dividend and only uses 23% of its earnings for dividends right now. All of this means that Apple has plenty of cash to keep its dividends flowing and can easily continue to raise them. For retirees looking for a stock that's entering its next act -- and will likely benefit from it for years to come -- look no further than Apple.

We certainly can't guarantee these three stocks will go on to deliver outsized returns. But given Realty Income's enviable property portfolio, Retail Opportunity Investments' positioning for future growth, and Apple's transition to higher-margin services, as well as the generous capital returns offered by all three companies, we think they're enticing portfolio candidates for retirees today.