Shares of Hibbett Sports (NASDAQ:HIBB), a leading sporting goods and athletic apparel retailer, jumped as much as 27% Friday morning after the company released strong first-quarter results. As of 2:30 p.m. EDT, shares were up about 22%.

Starting from the top, net sales jumped 25% in Q1 to $343.3 million, easily topping analysts' consensus estimate for $327 million. While the stronger top line did include nearly $60 million from its City Gear acquisition, it was also driven by a healthy 5.1% increase in same-store sales, a far better result than the 0.7% decline analysts had predicted. Adjusted earnings of $1.61 per share impressed investors, compared to analysts' estimates that called for a more modest $1.32 per share. 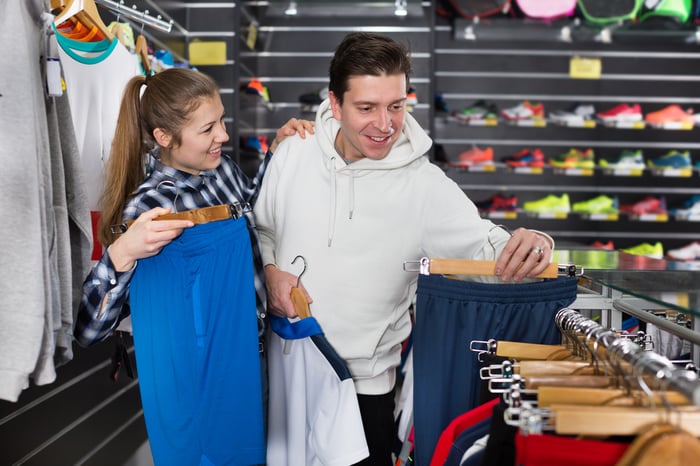 "Our first quarter results reflect improved performance in both the store and e-commerce channels," said President and CEO Jeff Rosenthal in the earnings press release. "We believe our improved web traffic and mobile app, along with continued traction in Buy Online, Pickup in Store, are translating to traffic in our stores and online."

In addition to Hibbett Sports' own results, the fact that Foot Locker released disappointing Q1 results (which sent its stock tumbling 17% Friday morning) likely enhanced investors' optimism about the retailer's near term outlook. Management remains focused on adapting to the current retail environment by accelerating the rate at which it's closing underperforming stores, and also improving the productivity of those that remain. Roughly 95 Hibbett stores are slated to close in fiscal 2020. The icing on the cake from the Q1 report was that management also bumped EPS guidance for fiscal 2020 from a $1.80-to-$2.00 range up to a $2.00-to-$2.15 range.