Federal regulators look like they will allow T-Mobile (NASDAQ:TMUS) to acquire Sprint (NYSE:S). The $26.5 billion deal would bring the number of wireless carriers from four to three; that loss of competition had been the main reason approval was in doubt.

That was always a silly argument. Yes, technically Sprint and T-Mobile compete with Verizon (NYSE:VZ) and AT&T (NYSE:T), but Sprint has been a distant fourth for a very long time without the cash flow needed to be a real competitor.

In many ways, it's like saying that there would be one fewer basketball team competing with the Golden State Warriors if the Atlanta Hawks merged with the Memphis Grizzlies. That would technically be true, but the combined Grizzlies-Hawks would still not be clear championship contenders.

Owning Sprint will probably make T-Mobile a stronger company. It won't, on its own, make it a championship contender. 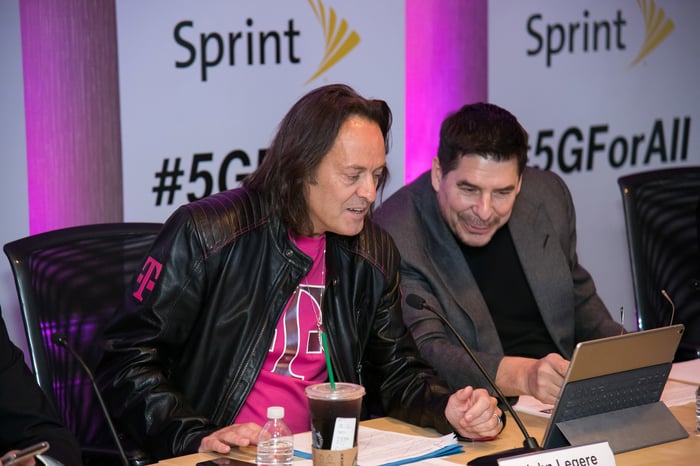 The added volume will help T-Mobile, but it's not an easy integration. Ideally, the larger customer base will make building a 5G network easier, but the companies work on different platforms. For a while, at least a few years, that means maintaining multiple technology bases -- and an eventual combination could chase some customers away.

Wireless mergers have a history of not going well. The most famous example would be Sprint buying Nextel. That deal -- which made sense at the time -- eventually ended up with the wireless carrier dismantling the Nextel network, dropping its name, and taking a massive loss.

You could argue that Sprint's botching of the Nextel integration doomed its future. It certainly sent the company on a path where it would be surpassed by T-Mobile for third place.

This is good for consumers

T-Mobile CEO John Legere has built his company's brand around removing pain points for consumers. His actions have led to AT&T and Verizon having to make major changes to their business model, including dropping contracts, ending overages, and making unlimited plans the default.

It's unlikely that a larger T-Mobile -- which still won't be as large as its rivals -- will start operating in ways that are not consumer friendly. The post-merger company will almost certainly remain a pro-customer agitator for change.

T-Mobile's success comes from its willingness to be different than its rivals. The company has been transparent with its customers, and that has built it strong loyalty and a customer base that's led the industry in growth for 21 straight quarters.

The challenge for T-Mobile isn't winning over new people or keeping existing customers happy. It's the technical challenges of moving Sprint's audience into the family. Essentially, a merger creates pain points that could lead to people leaving for Verizon or AT&T.

Legere's goal is to make sure that doesn't happen, and it's silly to think he'll get there by raising prices or doing things that make T-Mobile less appealing. Federal regulators should (and will) approve this deal, because the underlying four-to-three argument was faulty in the first place.