Please ensure Javascript is enabled for purposes of website accessibility
Log In Help Join The Motley Fool
Free Article Join Over 1 Million Premium Members And Get More In-Depth Stock Guidance and Research
By Billy Duberstein – May 25, 2019 at 1:18PM

The dividend yield is once again in the double digits.

Revenue pressures in legacy technologies such as voice landlines and declining prices for wholesale fiber sales have caused revenues to decline. That, combined with a high debt load, has caused investors to flee. The company also surprised investors with a dividend cut on its first-quarter conference call, leading many yield-seekers to sell.

And yet, no one can deny that the stock is cheap. CenturyLink's valuation has plummeted to roughly five times its enterprise value to EBITDA, and only about 3.5 times price to free cash flow, based on management's 2019 projections.

So, should you be greedy when everyone is fearful, or just fearful? 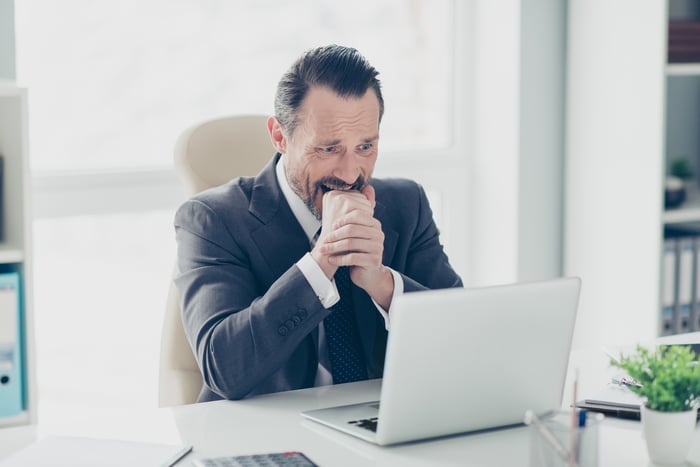 In the first quarter, CenturyLink's revenue fell 5% year over year, with losses spread over both the enterprise and consumer categories. Management also said that it was exploring a sale of its consumer businesses, as the current team is focused on the enterprise side, where CenturyLink earns about 75% of its revenue. Selling off the consumer business could put a dent in the company's $35 billion debt load, although it would also lower revenue and EBITDA.

Finally, investors may also be worried the company had only $315 million in free cash flow in the first quarter, down from $941 million in the year-ago quarter.

So, are there any silver linings that bulls can cling to? The answer is yes, and in fact, there are quite a few.

1. Adjusted EBITDA grew as margins expanded: Though revenue declined a not-so-great 5%, CenturyLink's adjusted EBITDA grew 3.7%. The company has done a good job of finding synergies after its integration with Level 3 Communications, which CenturyLink purchased in 2017. Management shed $128 million in costs just in the first quarter, and expanded EBITDA margins to 40.1%, up from 36.7% a year ago. Going forward, the company expects to take out $800 million to $1 billion in cost out of the business over the next three years, though these permanent savings will incur one-time costs of $450 million to $650 million.

Though the company's free cash flow came down in the quarter, much of that was due to the timing of working capital payments. In addition, the first quarter saw higher-than-normal bonuses that won't be repeated later in the year. Management also invested about $126 million more in capital expenditures than it did in the year-ago quarter, and these increased capital expenditures should lead to either revenue growth or decreased costs going forward.

3. Paying off debt at a discount: The main reason that CenturyLink cut its dividend earlier in the year was to pay off debt. The company plans to pay down about $2 billion this year, and just announced a $575 million tender offer for some of the company's highest-interest debt. All of these bonds are trading at a discount to par, and CenturyLink's offers, while at a premium to current prices, are still mostly below par, with some offers as low as $885 per $1,000 face value. That means CenturyLink could pay off more than $2 billion in debt while spending only $2 billion in cash, should bondholders accept.

4. Insiders are buying: In both March and very recently in May, insiders bought a significant amount of stock. CEO Jeff Storey and CFO Neel Dev bought shares in the open market back in early March at prices just under $12, and then on May 23 at prices just under $10. In addition, two other board members, Chairman Harvey Perry and Steven Clontz, also purchased shares at the similar times and prices.

What would really turn around CenturyLink's stock is if revenue stabilizes or starts going in the other direction. Storey was actually installed by an activist investor two years ago, who referred to the CEO as the "Tom Brady" of the telecom industry. However, Storey inherited a tough task, with a company that has lots of declining legacy businesses. He also seems to have lost a bit of credibility with investors when he slashed the dividend after several quarters of saying that it was safe.

Operationally, however, the company has exceeded its cost-cutting goals, and is currently investing in new products and services around hybrid cloud and network security. Since the payoff for these investments would be in the future, investors won't be able to see them and thus won't know if they happen as long as the legacy segments continue to weigh in.

CenturyLink is no doubt a high-risk stock, but for those willing to take the plunge, its low price presents substantial upside. Recent insider buys suggest management believes in its plan, so investors will have to decide if they believe more in management's view or Mr. Market's.