Please ensure Javascript is enabled for purposes of website accessibility
Log In Help Join The Motley Fool
Free Article
Join Nearly 1 Million Premium Members And Get More In-Depth Stock Guidance and Research
By Keith Speights – May 26, 2019 at 9:00AM

There's at least one thing about these biotechs that the Oracle of Omaha should find especially appealing.

Warren Buffett is a big fan of moats. He might like medieval castles surrounded by water, but the legendary investor especially likes the stocks of companies with competitive advantages that protect them as much as those castles' moats do.

The Oracle of Omaha isn't as big of a fan of biotech stocks. But if he checked out certain specific companies, he just might find a lot to like -- especially those with some strong moats that he prizes so much. The three big biotech stocks with the best moats of all are Alexion Pharmaceuticals (ALXN), BioMarin Pharmaceutical (BMRN -0.78%), and Vertex Pharmaceuticals (VRTX 1.20%). Here's what sets these companies apart. 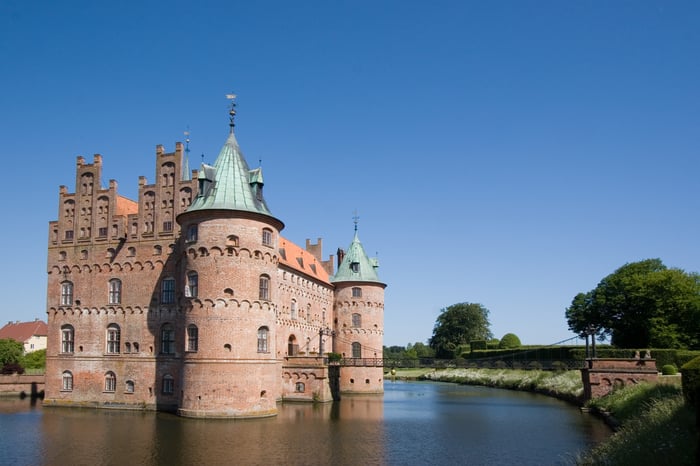 One drug generated more than 86% of Alexion's total revenue of $4.1 billion last year. That might be worrisome were it not for the fact that the drug has little-to-no competition.

Soliris first won Food and Drug Administration (FDA) approval in 2007 as a treatment for paroxysmal nocturnal hemoglobinuria (PNH), an ultra-rare genetic blood disorder. It was and still is the only drug to receive FDA approval for the condition that reduces hemolysis, the destruction of red blood cells.

Soliris now has a significant competitor on the market. The good news for Alexion is that this new rival is the company's latest product, Ultomiris. The FDA approved Ultomiris in treating PNH in December 2018 -- earlier than expected. Alexion hopes to gain approval for the drug in treating aHUS this year. Market research company EvaluatePharma ranks Ultomiris as the biggest new drug launch of 2019 and projects sales of $3.5 billion by 2024.

BioMarin's sources of revenue are more diversified than Alexion's. And the biotech's moat appears to be just as strong.

The company's top-selling product, Vimizim, generated nearly one-third of BioMarin's total revenue of $1.47 billion last year. Vimizim is the first and only enzyme-replacement therapy approved for patients with rare genetic disease Morquio A.

Kuvan isn't too far behind Vimizim, contributing around 29% of BioMarin's total revenue. The drug is one of two approved prescription medications for treating metabolism disease phenylketonuria (PKU). BioMarin's No. 3 seller is Naglazyme. It was the first -- and so far only -- enzyme-replacement therapy approved by the FDA for treating rare genetic disease mucopolysaccharidosis type VI (MPS VI).

BioMarin's other drugs also enjoy moats. Aldurazyme is the only FDA-approved treatment for MPS I. Brineura is the only enzyme-replacement therapy approved for treating CLN2 disease, which is a common form of rare genetic disorder Batten disease. And last year, Palynziq won FDA approval for treating PKU, joining Kuvan.

Vertex has three approved products on the market -- Kalydeco, Orkambi, and Symdeko. All three drugs treat cystic fibrosis (CF). And they're the only approved CF drugs that treat the underlying cause of the disease.

The biotech is also ahead of the curve with the next generation of CF treatments that include three different drugs. Vertex expects to file for FDA approval of its first triple-drug CF combo in the third quarter of 2019, followed by submission for European approval by the end of the year.

AbbVie also hopes to succeed with its own triple-drug CF combo with a program licensed from Galapagos. But the big drugmaker is well behind Vertex. Also, one of the key potential component drugs in AbbVie's combo didn't perform as well as desired in a phase 2 clinical study last year.

Meanwhile, Vertex is looking to score in other areas where it could also enjoy a strong moat. The biotech partnered with CRISPR Therapeutics to develop gene-editing therapies for rare blood diseases beta-thalassemia and sickle cell disease. Vertex is also evaluating a candidate in an early-stage clinical study for treating rare genetic disease alpha-1 antitrypsin (AAT) deficiency.

Warren Buffett probably wouldn't be excited about the valuations of two of these biotech stocks. BioMarin's shares trade at over 320 times expected earnings, while Vertex has a forward earnings multiple of 27.

It's not quite as bad as it looks at first glance, however. BioMarin hasn't been consistently profitable in the past but could generate positive earnings beginning next year. Vertex doesn't seem nearly as expensive when you factor in the tremendous growth prospects for the biotech. Wall Street analysts project that Vertex will grow its earnings by an average of 45% annually over the next five years.

On the other hand, Alexion doesn't appear to be expensive at all. The stock trades at less than 12 times expected earnings.

Buffett might not be a big fan of biotechs, but he has bought some big pharma stocks in the past. And with the great moats offered by Alexion, BioMarin, and Vertex, the billionaire investor could find that these stocks are more up his alley than he might have thought.