While some believe that the streaming revolution spells the end of moviegoing as we know it, 2018 was actually a record year for the domestic box office. Moviegoing attendance has very gradually declined over the past two decades, but theaters have regularly increased prices just above inflation, and have been able to increase revenue. Last year, some of the largest movie theater chains rolled out their own loyalty programs, which played a part in the box office uncharacteristically growing attendance, and not just revenue, in 2018.

The two largest public U.S. theater companies are AMC Entertainment (NYSE:AMC) and Cinemark (NYSE:CNK). AMC is the largest theater chain in the U.S. and the world, having acquired Carmike in 2016, along with European theater chains Odeon and Nordic shortly thereafter. AMC currently runs 636 theaters in the U.S. and 365 theaters across Europe, and recently inked an agreement with Saudi Arabia to begin opening theaters there.

Cinemark, meanwhile, has 342 theaters in the U.S., as well as 205 theaters across Latin America. It also owns a 25% stake in National Cinemedia (NASDAQ: NCMI), which sells pre-movie advertising.

So, which is the better bet today? 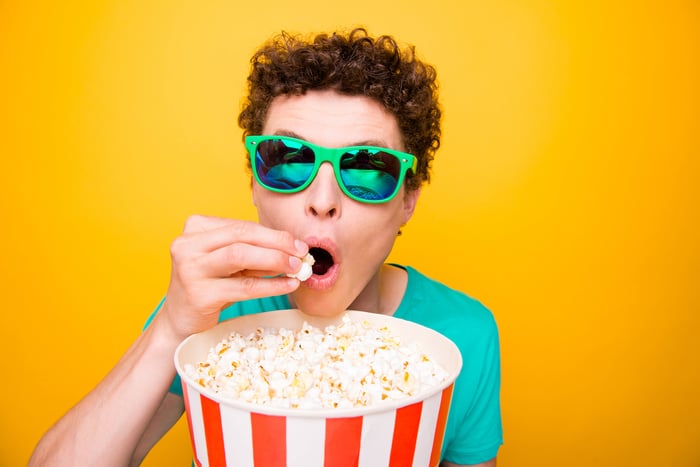 Revenue and attendance versus the industry

Here's how each company fared in the first quarter, relative to the prior year.

A few interesting things are going on here; obviously, the Latin American box office did better on a relative basis than Europe, as Cinemark's international segment vastly outperformed AMC's. However, AMC did better than Cinemark on a relative basis in the U.S., although both companies outperformed the overall U.S. box office, which was down (16.2%) overall in the first quarter.

Another curious element is that AMC's revenue growth underperformed both Cinemark and even its own attendance figures, whereas Cinemark's revenue outstripped attendance. However, there is a very good reason for this: AMC's new A-List loyalty program, in its U.S. footprint, ramped up faster than expected in the second half of last year and in the first quarter. That, along with lower premium format films in the first quarter, caused the company's average ticket price to decline 4.8% (2.4% on a constant currency basis).

Cinemark also has a subscription loyalty program with Cinemark Movie Program, but it is far less ambitious than AMC's. Here's how both stack up:

As of its recent earnings call, Cinemark had attracted 660,000 members to Cinemark Movie Club, while AMC just passed 800,000 for AMC Stubs A-List.

As you can see, AMC's subscription offers a lot more benefits. In fact, Cinemark's program is priced higher than its average U.S. ticket price of $7.98, so it really only benefits those on the concession and online ordering side. AMC's program, however, has the chance to lower margins if subscribers use the program three or more times per month, though that is counteracted by patrons buying more food and bringing along other nonmembers. As the program ramped up last year, AMC's margins contracted. But, according to management, the average member is moderating their frequency as time has moved on, and it now expects the program to lead to an extra $3 in EBITDA per patron by the end of this year.

One interesting thing to note is that even though AMC's average ticket price is $9.37 versus Cinemark's $7.98, Cinemark is structurally more profitable. This is because AMC's theaters tend to be in high-rent locations in big cities to a greater extent than Cinemark.

Not only is Cinemark more profitable, but its balance sheet is in much better shape. AMC's ambitious acquisition spree in 2016-2017, along with heavy investments in recliner seating, has left it with a huge pile of debt, which is now nearly 5.5 times EBITDA. In contrast, Cinemark's more cautious, organic growth initiatives has left it with a debt-to-EBITDA ratio of just 2.7. 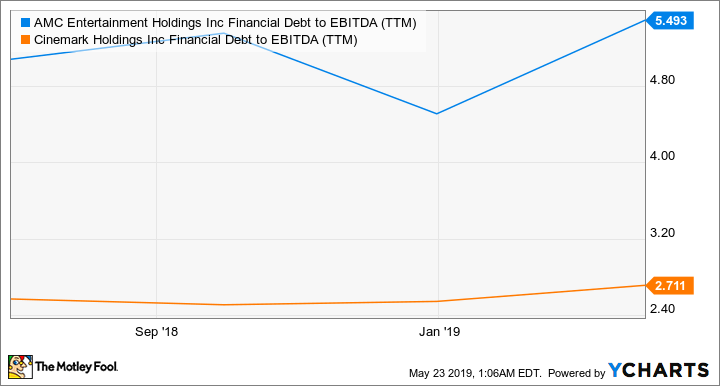 But AMC is dirt cheap

The market clearly likes Cinemark's better margins and balance sheet, as it trades at a significantly higher enterprise value to EBITDA than AMC. That lower valuation has also pushed AMC's dividend up to 6%, whereas Cinemark's dividend yield is only 3.3%. 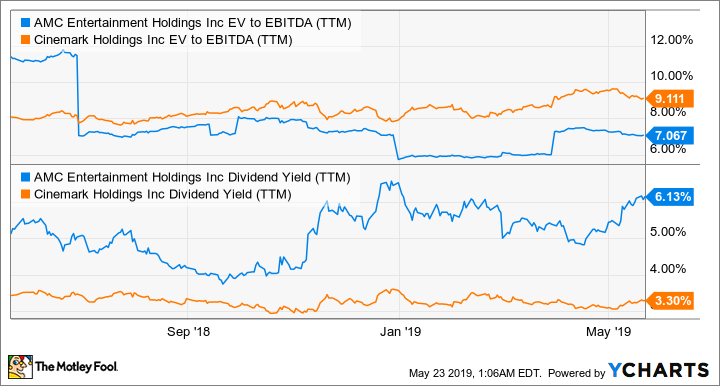 Choosing between AMC and Cinemark comes down to your risk tolerance. AMC is highly levered and has lower margins, which makes it more risky, but it's also embarking on a more ambitious subscription program. Should A-List work out, AMC's stock could go much higher. However, Cinemark is definitely the safer play, due to its structurally higher margins and lower debt load. Choosing between the two will depend on your view of the resiliency of the movie industry, as well as your appetite for risk.