Please ensure Javascript is enabled for purposes of website accessibility
Log In Help Join The Motley Fool
Free Article Join Over 1 Million Premium Members And Get More In-Depth Stock Guidance and Research
By Steve Symington - May 28, 2019 at 9:00AM

Cash flows are suffering due to Splunk's shift to renewable bookings. Opportunistic investors should take note.

When Splunk (SPLK 2.08%) posted stronger-than-expected fiscal first-quarter 2020 results late last Thursday, it was surprising at first to see shares of the operational-intelligence platform leader plunge more than 7% in response.

After all, Splunk's quarterly revenue soared more than 36% year over year to $424.9 million, well above management's guidance for $395 million, both as Splunk up-sells existing clients and new customers (including more than 400 enterprise clients added last quarter alone) enter the fold. Meanwhile on the bottom line, that translated to a surprise adjusted profit of $0.02 per share, crushing consensus estimates for an adjusted loss of $0.14 per share.

What's more, Splunk offered second-quarter guidance for revenue of $485 million, around $5 million ahead of Wall Street's models, and followed by increasing its full fiscal-year revenue outlook by roughly $50 million, to $2.25 billion.

So why the drop on Friday?

It didn't help that Splunk was already up 25% year to date leading into the report. But it turns out some analysts are concerned that Splunk simultaneously told investors it now expects full fiscal-year operating cash flow to be roughly $250 million, a whopping $100 million reduction from its previous $350 million target. 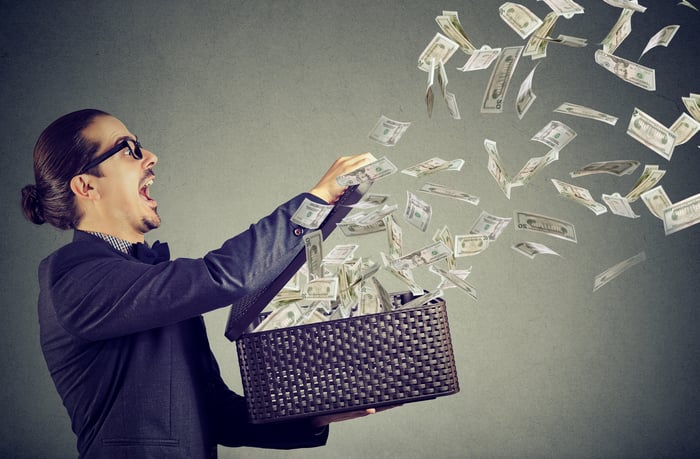 But this also raises the question: Should investors be concerned with Splunk's tempered cash flow prediction?

I don't think so.

With respect to cash flow, [we] mentioned before that the shift to renewable bookings impacts the timing of our invoicing and therefore the timing of our cash collections. We reached the renewable mix of 77% last year -- which was 12 percentage points higher than planned -- and it's expected to be at least 85% this year. This overachievement is driving acceleration of unbilled contract value as well, which is well ahead of our plan. ... Importantly, we expect that the timing of cash collections will normalize once the renewable mix reaches a steady state.

Put another way, Splunk's transition away from perpetual licenses and toward a more predictable, cloud-based subscription model is happening much more quickly than the company initially expected. And the timing of Splunk's recognized cash flow is suffering in the near term as a result.

This reminds me of Adobe's similar transition away from perpetual licenses and toward its popular cloud-based solutions a few years ago. That process led traders to punish Adobe stock multiple times between 2014 and early 2016, as the market failed to equate the creative-software specialist's seemingly conservative forward guidance with the timing of its own rapid shift to a recurring-revenue model.

Sure enough, astute investors who took advantage of those pullbacks have watched Adobe stock more than triple since early 2016 as the underlying strength of its business became clear.

With Splunk shares now down nearly 20% from their all-time highs -- and barring a broader market pullback that drags down high-flying tech in the process -- I think Splunk investors willing to watch this recurring-revenue shift unfold could be poised to enjoy a similar run, particularly as the market sees its cash flows begin to stabilize in the coming years.