Shares of Beyond Meat (NASDAQ:BYND), a maker of plant-based "meat" products, closed Wednesday's trading session at a 13.3% gain. The driving force behind this sudden jump came from an offhand remark by McDonald's (NYSE:MCD) CEO Steve Easterbrook -- on national TV.

In a CNBC video clip (CNBC is owned by Comcast), reporter Carl Quintanilla asked Easterbrook whether McDonald's might be interested in bringing vegan meat alternatives to the mainstream market, specifically citing Beyond Meat as a potential provider of the required food products.

"Absolutely no idea at this stage," said Easterbrook. "Clearly, anyone who has something they want to get scale to will often look to McDonald's to be that partner -- to help them scale."

Easterbrook never added Beyond Meat's name into his own comments, but he also seemed to be open to the idea of adding plant-based meat alternatives to the regular menu at some point. 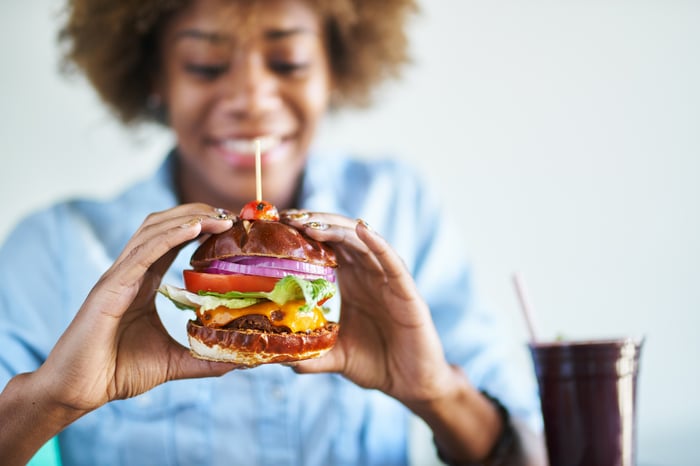 As market-moving news go, this was a pretty lightweight comment dropped by a big-name CEO on a national broadcast stage. McDonald's already has some meatless tests running in certain European markets, typically based on a competing solution from Swiss food giant Nestle.

Even so, Easterbrook had to remind Quintanilla and his viewers what he said about a broader introduction on McDonald's first-quarter earnings call in April:

Is there an additional complexity? And if there is, is that complexity worth it? So we'll stay close to consumer demand; I certainly know our teams there are paying close attention and discussing this among each other, and with some of the options that are out there. So maybe more to come, but nothing much to say about [it] in the moment.

In other words, McDonald's is thinking about meat alternatives, but remains far from making any kind of large-scale announcement in that arena. Beyond Meat's investors simply overreacted to today's TV-based exposure.