After securing Food and Drug Administration approval on May 28 for a device that may improve tattoo removal, shares of Soliton (NASDAQ:SOLY) climbed from $6 per share to over $29 per share on Wednesday. Shares spiked by another 22% earlier today before finishing 8% lower at 4 p.m. EDT. Here's what is causing this stock's eye-popping volatility.

An estimated 70 million Americans have tattoos, and according to Soliton, over 60% of them would consider full or partial removal. 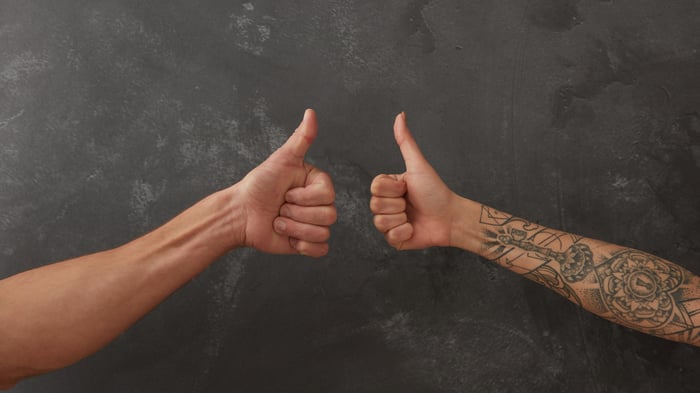 Currently, tattoo removal is commonly done using lasers that break up ink into tiny particles that can be removed from the body naturally. But this process can take up to 10 visits at an out-of-pocket cost of $100 to $500 per visit, and its results often fall short.

In clinical trials, Soliton's Rapid Acoustic Pulse (RAP) device produced superior results when used alongside laser treatment versus laser treatment alone. Specifically, 72% of the tattoos treated with the laser and RAP achieved 25% or greater fading at 12 weeks; when treated by laser alone, only 40% of tattoos faded by 25% or more. There was 75% or greater fading in 19% of the RAP-treated tattoos, something that only happened in 3% of tattoos treated by laser alone.

The FDA approval of Soliton's device is a milestone, but there's a lot of work to do. It's still ironing out manufacturing, so a limited launch isn't expected until 2020, and widespread availability isn't planned until 2021.

The device could improve removal, but the company may have to dilute investors to shore up its balance sheet ahead of its commercial launch. There's also no certainty that practitioners will embrace it once it is available.

Therefore, I think Soliton should be viewed as a high-risk stock unsuitable for most investors, at least until we have more insight into its launch plans and financial runway. For now, I'm content to stay on the sidelines and focus on other ideas.