One analyst thinks there are even better times ahead for Amazon.

Is it possible that the market actually underrates Amazon.com (AMZN -8.43%)? Amazon was always thought to have been a terrific growth stock, but after its incredible run over the past few years, many think Amazon's shares already discount that bright future. Currently, Amazon trades at a whopping 77 times trailing earnings, which makes one wonder how much upside there could really be.

And yet, according to Piper Jaffray analyst Michael Olson, the answer is... yes. Olson thinks that, even without much extra effort on Amazon's part, the stock could reach a whopping $3,000 per share by 2021, up from $1,820 today.

This may seem far-fetched to some, and some stock commentators balked at the call last week when Olson made it. After all, Amazon's revenue has decelerated this year. In fact, even Olson expects that deceleration to continue. So how is his projection for $3,000 possible? 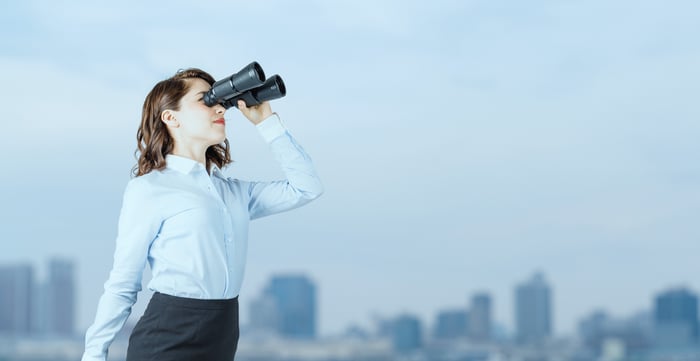 Olson breaks down Amazon into three basic segments, which are separated by product: Amazon Web Services (AWS), advertising, and the core retail business. AWS and advertising are relatively new businesses, and they make up a smaller portion of Amazon's overall revenues; however, AWS infrastructure-as-a-service and advertising are both terrific businesses with high profit margins.

Last quarter, AWS grew 41%, with operating margins of 28.9% -- dream metrics by any standard. Meanwhile, Amazon doesn't break out advertising specifically, but rather groups it in with the "other" segment, which grew 34% last quarter, on top of a whopping 132% growth in the year-ago quarter. There are a few other products in this category, though Amazon management notes that "other revenues" is "primarily" made up of advertising services, which are growing "a bit faster" than the category as a whole. We also know that in general, large digital advertising companies like Alphabet and Facebook are exhibiting great growth and have even better operating margins.

That leaves the good ol' retail business, which Olson believes the market is shortchanging.

A retailer or marketplace?

When stripping out the first two businesses, Olson sees the core retail business trading at a price-to-sales multiple of traditional brick-and-mortar retailers, rather than pure-play e-commerce marketplaces. Olson says that if he prices Amazon's retail segment at a 10% discount to the average e-commerce marketplace such as eBay or China's Alibaba, Amazon's stock could garner a $3,000 valuation, based on 2022 sales estimates. That's in contrast to just $2,031 if valued like a brick-and-mortar retailer like Walmart.

But should Amazon be valued like a pure e-commerce marketplace? Yes and no. On the one hand, a majority of Amazon's sales -- almost 57% -- are still in direct online sales and physical stores (mostly Whole Foods), for which Amazon directly owns the inventory. On the other hand, the more "marketplace-like" third-party sales and subscription revenues are coming on strong, making up 27% of sales last quarter. Third-party sales grew 20%, twice the rate of direct online sales, and subscription sales surged 40%, so clearly these segments should help Amazon's multiple as they make up a larger part of the business over time.

That's why Olson thinks Amazon will benefit not only from strong growth, but also gradual multiple expansion over the next two years.

Now, it's not clear whether Amazon's retail segment should garner full e-commerce multiples -- obviously, a large portion of Amazon's sales will still be in the form of direct sales of owned inventory going forward. However, Amazon also doesn't have the extra baggage of real estate costs, which legacy retailers do.

But even if the retail segment doesn't quite garner the full multiple of a pure-play e-commerce company, I still think $3,000 is in range. That's because Olson doesn't seem to be factoring in newer ventures such as Shipping with Amazon, newer healthcare initiatives, or any other potential acquisitions into his valuation. As we know, Amazon tends to surprise to the upside over time.

Therefore, should Olson's 2022 sales projections for each Amazon segment pan out, that $3,000 target may not be nearly as far-fetched as some may think.