Please ensure Javascript is enabled for purposes of website accessibility
Log In Help Join The Motley Fool
Free Article Join Over 1 Million Premium Members And Get More In-Depth Stock Guidance and Research
By Brittany Somerset - Updated May 31, 2019 at 4:07PM

Steve DeAngelo's company is beginning with a reverse takeover and will trade on the Canadian Stock Exchange.

Following a reverse takeover of FLRish Inc., beloved dispensary chain Harborside's stock is set to commence trading on the Canadian exchange on or around June 6, under the symbol "HBOR."

Founded in 2006 and beginning as a nonprofit, pioneering dispensary Harborside was awarded one of the first six medical cannabis licenses granted in the U.S. and made the first legal cannabis sale in the state of California. The company is serving more than 300,000 patients and generating over CAD 400 million in sales since then. Harborside currently commands 3% of the entire California retail market, which is the biggest market in the country by a landslide, according to the company. 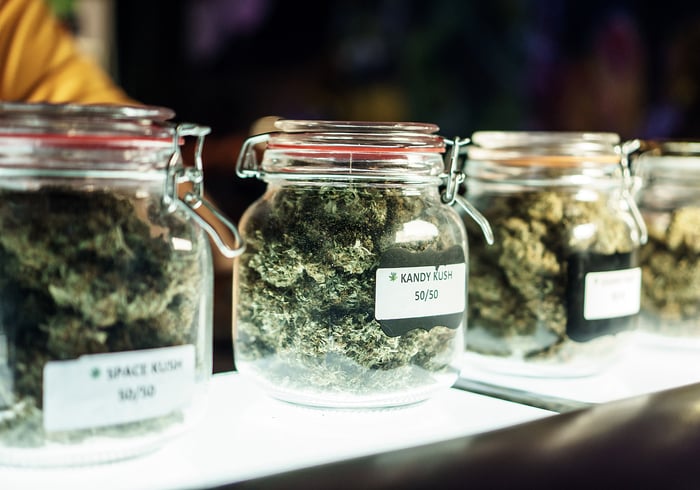 Harborside Inc. (formerly Lineage Grow Company Ltd.) is announcing today the completion of its reverse takeover of FLRish, Inc. (d/b/a Harborside) ("FLRish") pursuant to the terms of a merger agreement dated February 8, 2019, as amended on April 17, 2019 among the Company, FLRish, Inc. and Lineage Merger Sub Inc., a wholly owned subsidiary of the "Reverse Takeover". The reverse takeover was completed by way of a "three-cornered merger" whereby FLRish merged with Merger Sub to form a merged corporation and a wholly owned subsidiary of the Company.

Harborside going public is a monumental step in the industry symbolically and financially. The company claims it plans to increase sales growth and deliver profitability, driving its retail and wholesale business off the production from its stores and farms. Three additional stores and a grow facility are already in the works.

Andrew Berman, CEO of Harborside Inc., said in a news release, "Today is a historic day for Harborside. The company has served as a pioneer for the entire industry, and we're excited to extend Harborside's tradition of 'trust, choice, and value' to both our customers and our shareholders."

Subordinate Voting Shares will be listed on the CSE at the opening of the markets on or about June 6, 2019, subject to the satisfaction of certain conditions to the listing.

In May 2019, Harborside executed a reverse takeover with Lineage Grow Company adding two dispensaries in prominent cities in Oregon, additional cultivation, distribution and retail assets to its portfolio, and an expected public listing on the CSE. The Company has entered into a purchase agreement with Walnut Oaks, LLC d/b/a Agris Farms and has signed a binding letter of intent to acquire Lucrum Enterprises, Inc. d/b/a LUX. The company has previously completed a $26 million Series B funding round and a $14.6 million Series C.

To many, Steve DeAngelo is an icon, a pioneer and a patient advocate all rolled into one. His tenacious, decades-long cannabis advocacy has made him legendary throughout the industry. Subsequently, Harborside a trusted and respected name in a sea of competitive for-profit companies that are eager to cash in on the greed rush without offering any corporate social justice initiatives.

From grassroots community campaigns to appearing on national television networks, and every uphill battle for legalization in between, DeAngelo has been on the frontlines as an activist for more than four decades. He played a key role in the passage of Initiative 59, Washington D.C.'s medical cannabis law and the passage of Prop 64, California's adult use law. He successfully defended multiple attempts by U.S. federal authorities to close Harborside. He continues to stand for legalization and decriminalization of cannabis around the globe.

Steve believes that a profitable, ethical, politically engaged cannabis industry will be the most powerful force in spreading cannabis reform to every corner of the planet. He will not rest and he will not stop until the last cannabis prisoner is free, according to SXSW.