With adult-use marijuana being legalized in Canada seven months ago and with 33 states in the U.S. having legalized pot in some form, investors are seeing an industry worth tens of billions of dollars or more taking shape before their very eyes. In these early days, companies are mapping out their strategies for capturing a portion of the business that can be defended for the long term.

Cronos Group (NASDAQ:CRON) is forsaking investment in growing ever-larger crops of marijuana in order to make money in other parts of the value chain. Does this strategy make Cronos a buy?

Cronos is one of the four biggest marijuana stocks by market capitalization, and one clear reason for that is its close relationship with tobacco giant Altria Group (NYSE:MO). Altria bought 45% of Cronos with an option to take control with another 10% in a deal that closed in March.

That deal has already started to pay off for Cronos, and not only for the 2.4 billion in Canadian dollars (around US$1.8 billion) that the company can use to invest in growth. Altria is also sharing its expertise with Cronos and helping it build out the strategy of what could essentially be its marijuana division. 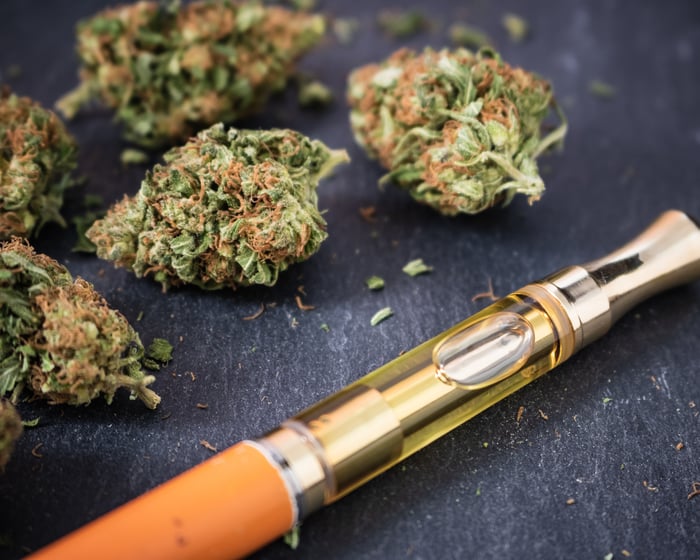 It's easy to think that Cronos may be contemplating using the funds from the Altria deal to expand its marijuana production capacity. The company is barely in the top 10 Canadian producers, and results from the first quarter got a cool reception from investors when that capacity didn't expand much.

Cronos produced 1,111 kilograms of marijuana, which was a 112% increase from the period a year ago, but only 6.8% more than the previous quarter. The company had a large, non-cash gain related to its deal with Altria, but, excluding that, the company lost more than it took in as revenue. Using its cash to buy acres of marijuana cultivation may get some short-term attention in the market, but that's not where Cronos is headed.

How important is production capacity?

To investors trying to understand marijuana stocks solely on the basis of production capacity, Cronos would seem to be lagging far behind its peers. But let's establish one thing up front: to this point, the relationship between a marijuana company's capacity to grow pot and its stock price is a weak one indeed. The scatter plot below compares the annual capacity of the top 11 producers with the market capitalization of their stocks.

If production capacity is a true measure of a marijuana company's value, you would expect these points to line up on a trend from lower left to upper right. The two top producers, Canopy Growth (NASDAQ:CGC) and Aurora Cannabis (NASDAQ:ACB) do get the highest valuations. But the value of the other eight companies don't seem to bear any relationship at all to production numbers. Even the top two are reversed from what you might expect. Aurora has 33% more capacity than Canopy Growth, but only 58% the market capitalization.

Is the market just being inefficient in valuing marijuana stocks? If that were so, you could say that companies with higher capacity and lower market capitalization are the better buys. These stocks could also deliver better returns as the stock price gets more in line with the underlying value of those businesses that can grow the most weed. But it's hard to argue that the market is being inefficient, given the amount of attention the stocks in this space are getting with investors these days. Clearly the market is weighting other factors more heavily than capacity, and investors that want to make money in pot stocks need to understand them.

Cronos has said that its business model is not to be the farmer in the marijuana value chain. In fact, the company's partnership with Altria foretells the direction Cronos is moving. Altria doesn't grow tobacco; instead, it relies on contract farmers and leaf merchants to supply the raw material for the cigarettes and cigars it sells.

In the most recent conference call, Cronos CEO Mike Gorenstein said, "Like Altria, we believe that the best way to create value to the supply chain is by working with contract farmers and not being farmers ourselves." The company's strategy is to make money in other parts of the value chain, just as tobacco companies don't make their profits from growing the plants.

A cannabinoid platform for derivative products

In the long term, Cronos sees itself as a cannabinoid platform company. The cannabis sativa plant produces over 400 chemical compounds, including about 80 phytocannabinoids, chemicals that have not been detected in any other plant. The psychoactive chemical THC and cannabidiol (CBD) have been studied, but little is known about the others, and some of them could have important medical uses. At the very least, the particular combinations of cannabinoids and of the 140 terpenes found in marijuana are known to produce different experiences, both therapeutic and recreational, in different strains of weed.

Cronos' ambition is to isolate the various cannabinoids -- even the more obscure ones -- and develop a portfolio of recipes that target specific psychoactive or therapeutic effects. In effect, the company wants to be able to formulate concentrates that mimic specific strains of marijuana or even create combinations that don't exist in natural plants. Although Cronos will continue to produce and sell dried marijuana flower, its focus for the future is on derivative products based on this platform.

Today Cronos sells strain-specific cannabis oil into the Canadian medicinal marijuana market through its Peace Naturals brand. The extracts preserve the cannabinoid and terpene levels that were present in the original strain. Peace Naturals is an established brand, and Cronos has a joint venture with MedMen Enterprises (OTC:MMNFF) to build a national retail chain of marijuana stores in Canada, giving the company a vertically integrated channel for selling the oils.

Cronos revealed one piece of its long-term puzzle earlier this month when it announced a multi-year agreement with extraction laboratory MediPharm Labs to buy $30 million of private label cannabis concentrate in the next 18 months and up to $60 million over 24 months. MediPharm Labs is a leading Canadian extraction company that purchases dried cannabis from 15 licensed producers and has the capacity to process 250,000 kilograms of flower per year.

MediPharm today has ability to produce the concentrates that Cronos uses in its medical products and will need to address the edibles, beverage, and vaporizer markets in Canada when those derivative products become legal in Canada later this year. But in the longer term, MediPharm plans to add chromatography processes to enable it to extract the individual cannabinoids and active pharmaceutical ingredients that Cronos needs for its ultimate goal.

In the long term, Cronos doesn't want to rely solely on dried cannabis flower for the input for its products. The company has formed a partnership with privately held Gingko Bioworks to produce a spectrum of cannabinoids, including lesser-known ones, from yeast cells in a process similar to brewing beer in a microbrewery. Gingko alters the DNA of yeast cells to turn them into miniature factories that can turn out the range of cannabinoids at high quality and purity, identical to those extracted from the plant, in an inexpensive process that can be scaled up reliably.

This sounds like science fiction, but the concept got some validation earlier this year when biologists at University of California at Berkeley successfully developed a similar process and immediately launched a company in California, called Demetrix, for producing high-purity cannabinoids. Ginkgo, founded by scientists from Massachusetts Institute of Technology, has been working on its processes for ten years and is closer to commercial production.

Cronos will fund Ginkgo's expenses for the partnership and have exclusive rights to the resulting intellectual property. Ginkgo has signed up to produce eight different cannabinoids and will receive milestone payments when it can produce the compounds in quantities of at least 200 liters for under $1,000 per kilogram of pure cannabinoid, a cost far below that of concentrate made by extraction from plants using today's methods.

Besides developing a business in concentrates, Cronos is working on vaporizing technology that it believes will be an important delivery system for its oils, and its relationship with Altria is paying off in this area. Cronos bought a research and development facility from Altria Israel in early May to jump start its efforts to invent "next-generation vaporizer products."

The deal for the laboratory included 23 product designers, engineers, and scientists with extensive experience in vaporizer development, and Cronos will set them working on devices that are specifically tailored to its cannabinoid formulations. And besides taking over Altria's in-house vaporizer development capability and the hard-to-find talent with it, Cronos plans to take advantage of Altria's experience in large-scale manufacturing when the time comes to produce a device.

A risky buy, but not because of production capacity

Cronos is not in a race to be one of the biggest marijuana farmers in Canada. As the CEO put it in a conference call almost a year ago, "Capacity is necessary to get us where we're going, but it's not our end game." The volume of cannabis concentrates sold in the U.S. roughly doubled from 2015 to 2018 and now comprise about a third of total cannabis sales. Vaporizer products have the biggest potential for growth in the category, and Cronos plans to prioritize them over edibles when the Canadian market opens up to derivative products in October.

Investors who focus on Cronos' production capacity are missing the point. A supply of plant material is important for the company, but its strategy is to focus on developing proprietary value further up the chain, and it shouldn't be surprising to observers if the company doesn't spend much of its CA$2.4 billion cash hoard on farmland and greenhouses. It'll follow Altria's model of buying crops from farmers or it'll buy oil from extractors to supplement what it grows itself.

Will Cronos' strategy work? It's far from certain. There will be plenty of competition, the technologies the company is investing in may fail, and it may turn out that blending rare cannabinoids doesn't produce differentiated products that customers want, anyway.

But for adventurous investors willing to take a risk on the company's vision for being a cannabis platform company, Cronos is an interesting speculation. Altria's backing gives some downside protection for the stock while the tobacco giant lends its expertise and financial resources to help build out the strategy. But with an industry in flux like this one is, almost anything can happen.