Williams Companies' recent string of wheeling and dealing is moving the needle quickly.

Williams Companies (WMB -0.40%) has been actively reshuffling its portfolio over the past year. While these sales have had a slightly negative near-term impact on its financial results, it's also starting to see the benefits of its wheeling and dealing. That was clear in the comments of CEO Alan Armstrong on the first-quarter conference call, as he ran through the positives of the company's recent string of moves.

Leverage is better than it looks

One of the first things Armstrong addressed on the call was the company's balance sheet; he stated that "the leverage story of the quarter-end requires some unpacking, since we have significant asset sale proceeds coming in post the quarter's end."

The CEO pointed out that the company ended the quarter with a debt-to-adjusted-EBITDA (earnings before interest, taxes, depreciation, and amortization) ratio of 4.92, which is above its initial 2019 target level of 4.75. However, Armstrong noted that this metric includes the roughly $727 million it paid out to purchase the remaining 38% interest in UEOM (Utica East Ohio Midstream), which it partially funded on its credit facility at the end of the quarter. The company will get that money back when it closes its joint venture with the Canada Pension Plan Investment Board (CPPIB) later this year. Thus, "if you adjust out that $727 million in cash we plan to receive at the closing of the JV, the leverage metric falls to 4.77 times," he said. 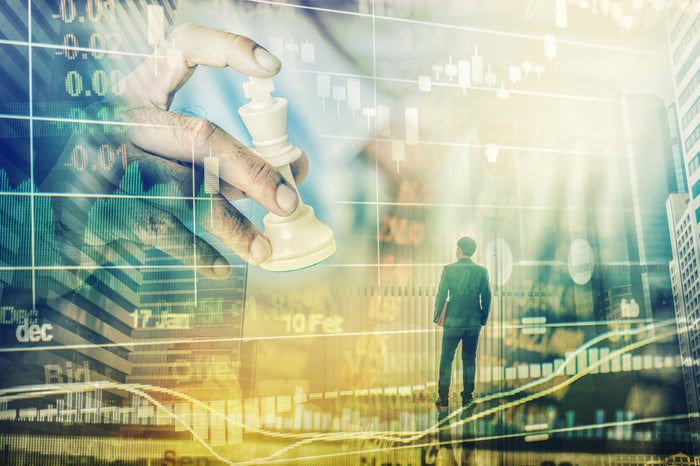 Furthermore, the CEO pointed out that "if you account for the approximately $600 million of additional proceeds we will receive from CPPIB at the closing of the JV, along with the $485 million we have now received from Crestwood Equity Partners in the Jackalope Gas Gathering transaction, the leverage metric falls to just over 4.5." While that number will tick higher as the company continues investing in expansion projects this year, Armstrong noted that "the effects of our portfolio optimization transactions along with our lower capital expenditure forecast [have] had a favorable effect on our 2019 year-end book-debt-to-adjusted-EBITDA [ratio], which we now expect to be under 4.6 times."

Williams' asset sales over the past year have had some negative impact on its financial results, since it's losing the cash flow those assets used to contribute. During the first quarter, for example, earnings in the company's West segment declined 15% year over year. That headwind from asset sales led investors to wonder whether they'd hinder the company's ability to achieve its full-year forecast.

CEO Alan Armstrong addressed that question on the call:

A lot has changed since we originally issued our 2019 guidance about a year ago. From a macro perspective, we've seen our producer customers pressured to pull back on capital investment, and we've seen a significant downward shift in NGL [natural gas liquids] margins. We've also had five important portfolio optimization transactions including the Four Corners of DJ Basin transaction, the Brazos JV transaction, the sale of our Gulf Coast purity business, our Northeast JV, and most recently the sale of our Niobrara business.

Even with all these moving parts, Armstrong said he was "pleased to confirm that despite these unforecasted changes, we are maintaining our guidance ranges for adjusted EBITDA, DCF [distributable cash flow], and dividend coverage ratio."

Armstrong also said on the call that "looking beyond 2019, we are still expecting 5% to 7% annual adjusted EBITDA growth over the long term." The company believes it can achieve that growth rate by investing $2.5 billion to $3 billion on expansion projects each year. While that's slightly above 2019's range of $2.3 billion to $2.5 billion, Williams has a large inventory of expansions under construction and in development to support that view.

Furthermore, the company estimates that it can fund the bulk of those expansion projects with internally generated cash flow after paying its high-yielding dividend. As a result, Williams remains on track to get its leverage ratio down to its goal of 4.2, "which we target to hit by the end of 2021," according to Armstrong.

Williams' portfolio optimization efforts over the past year have accelerated the improvement of its balance sheet by quickly reducing its leverage ratio. While the company is seeing some near-term earnings impact, it's overcoming that by completing expansion projects.

As a result, Williams remains on track with not only its 2019 growth forecast but its longer-term outlook. The only difference is that the company now boasts a much stronger financial profile, which makes it a less risky investment.