United States Steel (NYSE:X) has been leveraging the strong steel market to bolster its balance sheet and invest for the future. Last month's earnings report indicated a continued journey down that path.

Some may be wondering if the dip in stock prices across the steel sector is an opportunity to pick up shares while the business cycle still has momentum. Let's take a look at what drove earnings for U.S. Steel and what that tells us going forward. 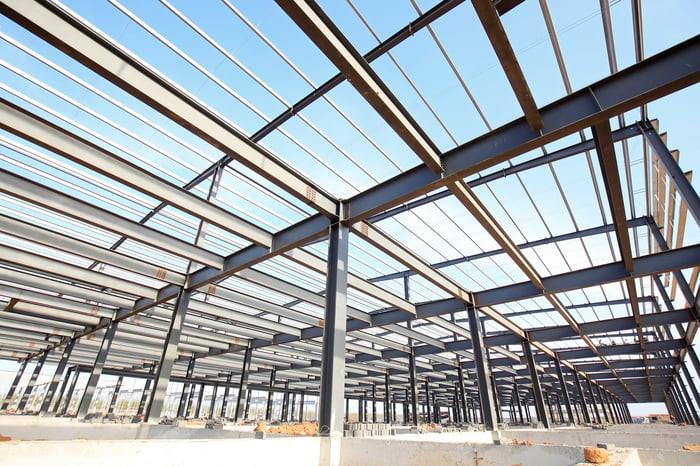 Results for the first quarter showed robust growth over an already improved year-ago quarter, as seen below:

The biggest source of growth was the company's flat-rolled business, where earnings almost tripled to make up two-thirds of the company's total (with the three other reporting segments being tubular, Europe, and other businesses).

This continues the trend seen in 2018 where the company attributed improvements to higher overall selling prices in all segments and higher shipments "in our Flat-Rolled and Tubular segments due to improved market conditions. Improved market conditions for our Flat-Rolled segment reflect accelerated demand for steel products in line with the recent economic growth, as well as the supply demand balance between imported and domestic steel." Effectively, the strong domestic economy and reduction of high levels of imports drove the gains.

The flat-rolled segment has been the focus of the company's Asset Revitalization Plan (ARP) that began in 2017. This program will result in $2 billion of project investments through 2020, as management seeks to improve the company's competitive and commercial position. With the recent first quarter earnings report, however, the company also announced a $1.2 billion investment in the flat-rolled segment's Mon Valley Works in Pennsylvania. President and Chief Executive Officer David B. Burritt summarized the news in the earnings release:

Over the past few years, we have made strategic investments across our footprint, with a focus on our most critical flat-rolled steelmaking assets. Our progress continued in the first quarter as we delivered strong financial results. Today's announcement of a state-of-the-art endless casting and rolling line at Mon Valley Works further strengthens our competitive position and will generate long-term value for our stockholders, customers, employees and community.

Major domestic competitors Steel Dynamics (NASDAQ:STLD) and Nucor (NYSE:NUE) have announced their own major investments during this business cycle, including an approximately $1.75 billion southwestern flat-rolled mill and a $1.35 billion plate mill in Kentucky, respectively. Both green field sites will utilize state-of-the-art technology and create new domestic supply in the coming years.

U.S. Steel has instead focused on their ARP, and this new announcement may be a sign that the company realizes they must stay ahead of the curve with more significant investments in new technology going forward. Management believes the Mon Valley investment will lower operating costs at the facility by $35 per ton and will contribute $275 million to EBITDA by 2023.

It should also be noted that up to $200 million of the Mon Valley investment is for environmental improvements at the Clairton coke oven section of the facility, which has recently been under scrutiny for a December fire and subsequent emissions issues resulting in fines of over $700,000 from the Allegheny County Health Department.

Investors have also been signaling their distaste for the steel industry recently. Stock prices have been on a notable downward trend the past few months with U.S. Steel and its peers significantly underperforming the broad market. 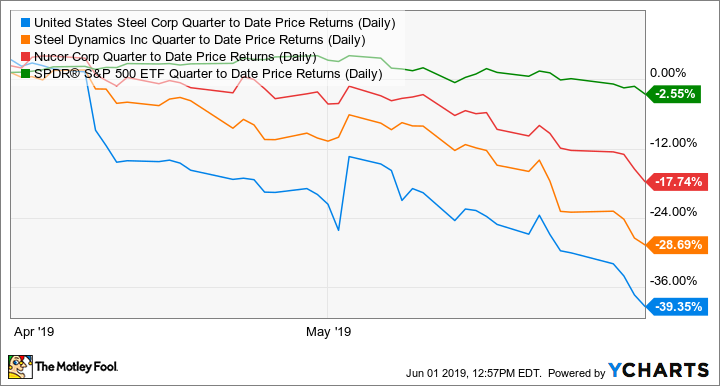 There are several likely reasons for this market fallout. First, some of the pricing momentum from tariffs has waned with the elimination of tariffs on imports from Canada and Mexico. There's also plenty of political uncertainty regarding the massive U.S. infrastructure deal that has been making headlines.

All of the recently announced domestic capacity additions could also result in a difficult pricing environment looking ahead, signaling a peak in the current market cycle.

From tailwind to headwind

If the macroeconomic conditions that helped create a tailwind reverse themselves, the recent trading may be indicative of things to come. Even with its balance sheet improvements, U.S. Steel remains in a more difficult position relative to its peers:

While it's difficult to predict when a business cycle may peak, and when the stock prices reflect that, there's no doubt that the additional capacity coming domestically will change the competitive landscape. How that plays out remains to be seen, as these projects are still a few years away from production. U.S. Steel has committed a large amount to investments in the business, and if there are market headwinds to navigate before the cycle turns back in the company's favor, investors will need to be patient.