MercadoLibre has had a historic run. Here's why it might actually be just getting started.

I won't bury the lede: Right now, MercadoLibre (MELI -3.21%) is valued at $29 billion. But I believe that 10 years from now, it could be many multiples larger. It's decidedly not too late to get in.

But there are three big reasons I believe in the long-term story -- and have backed it up by putting almost 9% of my real-life holdings into MercadoLibre stock. 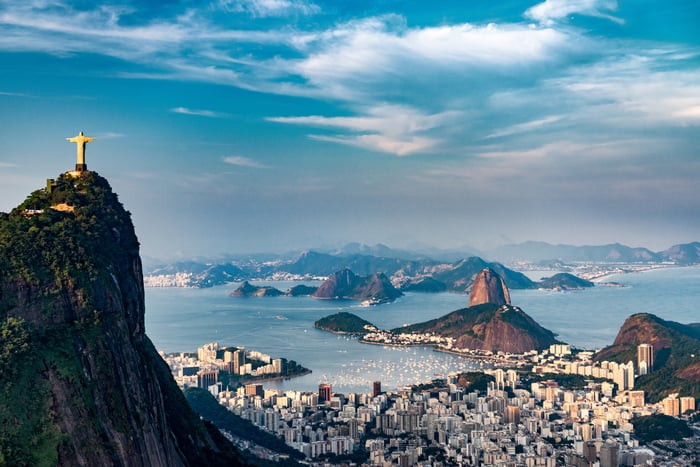 By far the most important is something I learned from reading author (and former trader) Nassim Taleb: the importance of a barbell technique. The idea is that a company should stay away from medium-risk, medium-reward strategies -- and instead focus on the extremes:

Doing this protects your downside (wide moat), while still leaving you open to finding new lines of business that have enormous potential.

MercadoLibre has already proven its ability to adopt the technique. For most of its operating history, it was simply a marketplace to connect buyers and sellers -- akin to what eBay is in the United States.

That model worked well, as MercadoLibre was able to take a small cut of every transaction -- and network effects meant that it was continually drawing in new buyers and sellers.

Then, when both Walmart and Amazon started moving into Latin America, MercadoLibre started investing aggressively in its fulfillment network. That's paid off, as its free two-day shipping guarantee -- available in a handful of countries -- has led to robust sales growth.

But the big story right now is MercadoPago. This payment option was on the "high-risk, high-reward" side of the barbell more than five years ago, but has now become a mainstay. During the first quarter alone, over $5.6 billion changed hands in 140 million transactions using MercadoPago -- representing growth of 35% in dollar terms and 94% in transaction numbers.

So what else is on the high-risk, high-reward side right now?

Will all of these work out? Probably not...but they don't have to. As we've seen with MercadoPago, even one of these proving popular could notably move the needle at MercadoLibre.

Of course, if the company didn't have the cash to fund all of these high-risk, high-reward ventures, it wouldn't much matter. But as of March 2019, the company has almost $3 billion in cash and investments and just $745 million in long-term debts, and it has spun out nearly $300 million in free cash flow over the past year.

This means not only that there's sufficient funding to continue reinvesting, but also that MercadoLibre could actually get stronger if there's a recession in Latin America. Under that scenario, the stock would undoubtedly fall. But the company could use its extra cash to push out weaker competition and grab long-term market share.

Finally, I'm a big believer in companies that are run by founders, have insiders with lots of skin in the game (stock ownership), and have happy employees. MercadoLibre checks all three of those boxes:

A word on how bumpy the ride can get

But be forewarned: When I talk about MercadoLibre being worth many multiples of what it is today, I mean that over the long run. That doesn't mean a month or even a year -- it means at least a decade.

Shares of the company have already doubled this year -- so there's lots of optimism priced in. And when we consider that 2,750% advance over the past ten years, it's worth remembering shareholders had to endure this in the meantime:

In all three periods, almost half of investor capital was wiped clean. The same scenario will almost certainly happen again in the next decade -- perhaps with more frequency. If you can't handle volatility like that, MercadoLibre isn't for you.

But those with the fortitude for such volatility have been rewarded. Even if you bought at the three peaks above, for instance, you'd be sitting on returns of 525%, 300%, and 280%, respectively.

If you can stay focused on the big picture, MercadoLibre could still be a "millionaire maker" stock.