Please ensure Javascript is enabled for purposes of website accessibility
Log In Help Join The Motley Fool
Free Article Join Over 1 Million Premium Members And Get More In-Depth Stock Guidance and Research
By Dan Caplinger - Updated May 3, 2019 at 8:35AM

The MercadoPago program is surpassing the Latin American e-commerce giant's marketplace in importance.

Fast-growing companies sometimes discover that what they once thought was an ancillary part of their business suddenly has more potential than their primary focus area. With Latin American e-commerce provider MercadoLibre (MELI -0.17%), the company's marketplace platform was initially the focal point for growth, but recently, its payment network has been the biggest driver of growth for the company -- paralleling the experience that one of its closest counterparts in the U.S. experienced with its own related payment service.

Coming into Thursday's first-quarter financial report, MercadoLibre investors were looking for strong growth in sales and a narrower loss than they saw a year ago. MercadoLibre's results showed the fundamental strength of its MercadoPago payment system and also raised expectations for future expansion ahead. 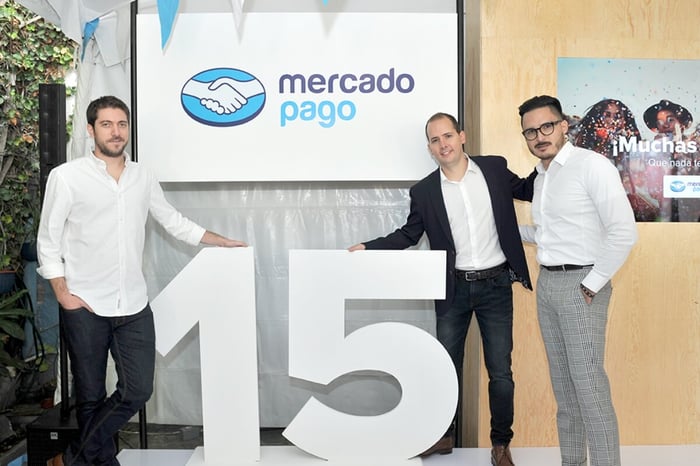 How MercadoLibre blew investors away

MercadoLibre's first-quarter numbers were little short of spectacular. Revenue surged 48% year over year to $473.8 million, dramatically exceeding the 33% growth rate that most investors had expected to see and accelerating from its 20% growth in the fourth quarter of 2018. Net income came in at $11.9 million, reversing a year-ago loss and producing earnings of $0.13 per share, besting the consensus forecast among those following the company for a $0.13-per-share loss.

The strong dollar actually held back MercadoLibre's growth. Revenue skyrocketed 93% on a currency-neutral basis during the period, and losses coming from devaluation of the Argentine peso cost the company $3.7 million in potential additional profit.

You can tell that MercadoLibre has shifted its priorities in the way it gave MercadoPago top billing in its press release. Total payment volume soared 35% in dollar terms and 82% in local currency terms, hitting a record of $5.6 billion. Total payment transactions were higher by 94% from the year-ago period to finish at 143.9 million. In particular, payments using MercadoPago outside the MercadoLibre platform amounted to more than $2.5 billion in 88.2 million transactions, with volume doubling in dollars and almost tripling on a currency-neutral basis. The company said that its mobile wallet quadrupled its number of active payers during the quarter, with particular strength in Argentina, Brazil, and Mexico.

For the namesake marketplace business, though, results were more mixed. Gross merchandise volume was down about 2% in dollar terms to $3.1 billion, as the strong dollar wiped out a 27% local-currency increase. Items sold were up 3% to 82.8 million, with minimum listing amounts and fixed fees weighing on volume. The number of unique buyers at MercadoLibre rose 11%, and listings topped the 200 million mark, up 58% year over year.

CFO Pedro Arnt celebrated the news. "It's encouraging to enter the new year with continued momentum in our business," Arnt said, "and to see our strategy delivering on multiple fronts in a sustainable manner." The CFO called out marketplace, payments, and shipping for their contributions to the company's success.

It's quite possible that one reason why the payments business is taking center stage has to do with the recent investment that PayPal Holdings (PYPL 0.80%) made in MercadoLibre. The $750 million investment gave PayPal about 1.72 million shares, or roughly a 4% stake in the company, and it helped MercadoLibre accelerate its investment in its payment platform to stay ahead of potential competition.

MercadoLibre investors were quite happy with the latest results, and the stock soared 10% in after-hours trading following the announcement. With so many things going right for the e-commerce specialist, MercadoLibre looks to have a lot more upside for its business prospects throughout the remainder of the year and beyond.