Yes, it's expensive. But it also has these two key characteristics.

There's no denying it: Shares of MercadoLibre (MELI -3.21%) -- Latin America's leading e-commerce company -- are expensive. In the past three years alone, the stock has quadrupled.

It would be easy to say that now's the time to sell. But I'm convinced that that move would be wrong. Let's cover why that's the case, and what you can do if you want to buy shares -- but protect your downside in case the company stumbles. 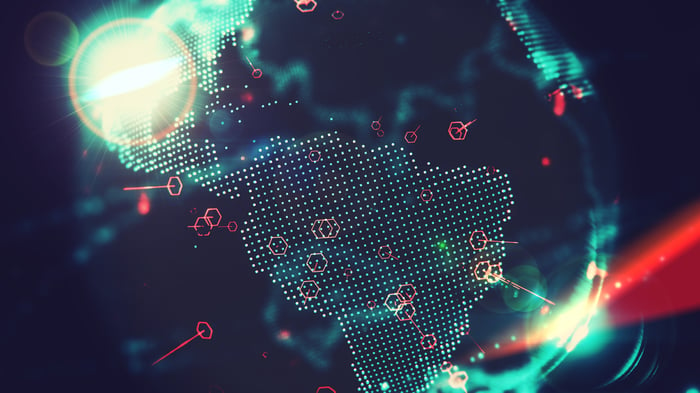 Nothing is a bigger mark against MercadoLibre's stock than its valuation. Keeping in mind that the S&P 500's price-to-earnings ratio currently sits at 22, here's how MercadoLibre compares.

That's right -- MercadoLibre isn't even profitable right now. The company has lost $0.82 per share over the past year. While it's not a perfect correlation, P/FCF often sits close to P/E. What does that mean? That the company's stock is trading at a price over seven times more expensive than the broader market!

And that's not the only knock against the company. As the middle class has grown in Latin America, huge rivals have entered the space. Walmart already has a brick-and-mortar presence in the region -- and its e-commerce efforts there are off to a good start. Amazon is aggressively moving into Mexico.

And as all this is happening, MercadoLibre's financial fortitude is starting to weaken. In general, over time, any investor would like to see the cash balance (blue line) and free cash flow (yellow) continually going up and to the right, while debt (red) goes down and to the right. 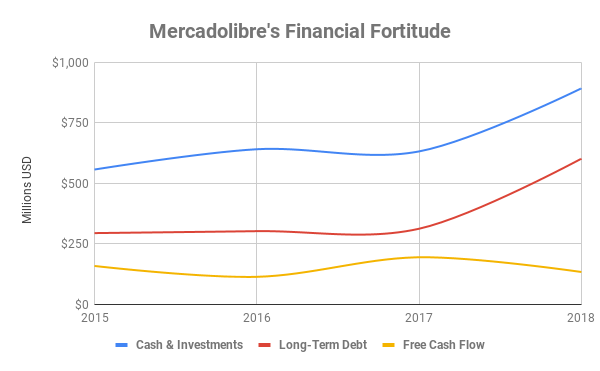 In fact, MercadoLibre's net cash position (the difference between the blue and red lines) ended 2018 at its lowest point in three years. A big part of that is because MercadoLibre is investing heavily to gain market share and thwart Amazon and Walmart (more on that below). And it's worth noting that PayPal's $750 million infusion of cash will help shore up the sheet.

But I'm still a big believer in the company. In fact, it constitutes more than 7% of my real-life holdings. I believe anyone wishing to invest in Latin America should strongly consider adding shares themselves.

The first reason for this is pretty simple to understand: The person running MercadoLibre -- founder and CEO Marcos Galperin -- will only succeed if I and my fellow shareholders succeed. As of the company's most recent proxy statement, Galperin owned 4 million shares. That's good for a 9% ownership stake worth over $2 billion.

Additionally, I'm always a huge fan of investing in founder-led companies. These organizations represent a founder's life's work. Founders are intrinsically motivated to create the most value -- for shareholders, employees, customers, and society alike -- possible over the long run. That's a dynamic I want to be a part of.

But skin in the game alone is no reason to invest in a stock. A much bigger consideration has to do with two forces:

MercadoLibre has both of these things in spades. Let's start with optionality. While not officially designated in company publications, Galperin has defined his company's mission as being "[to] take the hassle completely out of commerce...[and to] enable the entire world of buying and selling."

There are lots of ways to accomplish this goal. The company started off in the simplest way possible: creating a marketplace to connect buyers and sellers.

That business was protected by the network effect: With each additional seller listing on MercadoLibre, potential buyers were incentivized to join. This drew in more sellers -- creating a virtuous cycle. Here's how well that's functioned over time. 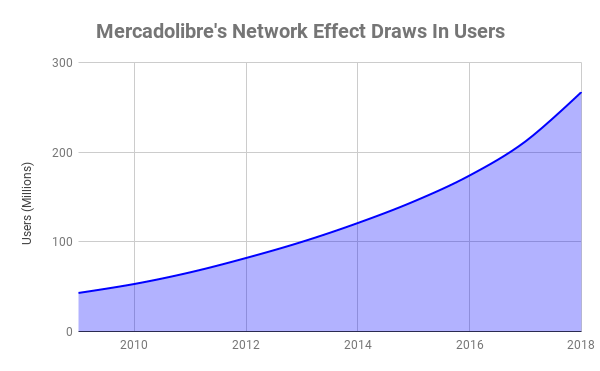 Not only has growth been robust, it's actually accelerating! If the competition wanted to steal business, it would have to create a marketplace that was so good, it could overcome the fact that there's already a location where Latin Americans can reliably go to buy goods online.

But the company hasn't stopped there. It's next-biggest line of businesses -- the one that Wall Street is so excited about -- is MercadoPago. This e-payment solution has been wildly popular in Latin America. It benefits from both network effects and high switching costs. As more vendors accept MercadoPago, it incentivizes users to adopt it -- creating the same virtuous cycle referenced above.

It doesn't stop there, though. Because so many Latin Americans are unbanked, MercadoPago represents one of the only ways to buy things online right now. While that particular advantage may not last forever, the combination of these two moats have let to booming MercadoPago payments over the past decade. 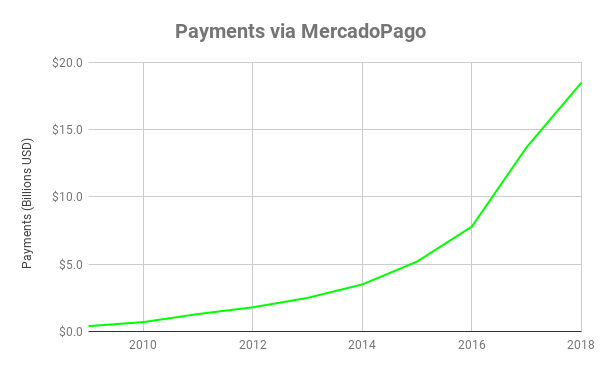 But -- you guessed it -- the company doesn't stop there. It is aggressively investing in its fulfillment network to offer quick delivery. The service -- dubbed MercadoEnvios -- is still in the early innings. If it is successful, it will benefit from the moat of low-cost production: It can send packages in two days or less for a lower internal cost than rivals.

That should give you an idea of what optionality means -- and how lucrative it can be when these new lines of business are protected by moats.

But be aware: Given MercadoLibre's expensive stock, the slightest stumble could cause shares to fall drastically. That's why I suggest you buy "in thirds." What this means is figuring out how much of your portfolio you want to devote to MercadoLibre -- then divide that amount by three. Invest the first third now, and wait with the other two.

This strategy has a number of practical benefits: It allows you to buy more if shares fall, while still giving you skin in the game if it keeps climbing. It also helps investors prepare emotionally for the volatility that comes with investing in such high-priced stocks.

Don't let MercadoLibre's run scare you away. With a valuation of less than $25 billion, the company still has a lot of room to grow in the decade ahead.