One day, one quarterly earnings report, and two acquisitions.

When Nikesh Arora took the reins at cybersecurity company Palo Alto Networks (PANW 9.70%) in the summer of 2018, he promised investors he would transition the company to profitable growth all the while investing and strategically acquiring other businesses. Almost one year later, Arora is making progress on both fronts.

The former executive at Alphabet's (GOOGL -1.34%)(GOOG -1.29%) Google and Softbank Group (SFTBF 1.99%) just announced a couple more takeovers, rounding off what has been a very busy first 12 months at the helm. And yet, if the stock's zero return can be believed, not all shareholders are thrilled. Such a myopic outlook is a mistake. 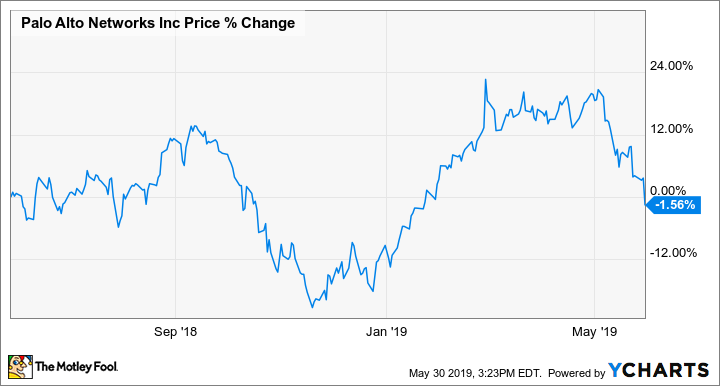 More spoils to the cyber giant

Since the start of 2018, Palo Alto has spent at least $1 billion to add smaller cybersecurity companies to its suite of services. The security leader is showing no signs of slowing down. On the day fiscal 2019 third-quarter results were issued, two more acquisitions were announced -- Twistlock for a cool $410 million and PureSec for an undisclosed (likely smaller) sum of money.

Both Twistlock and PureSec are being added to the newly created Prisma segment at Palo Alto. According to Palo Alto, the various cloud offerings within Prisma boast 9,000 enterprise customers -- making Prisma the world's largest integrated cloud security business. It joins the Enterprise firewall and threat-prevention segment and Cortex artificial intelligence-powered continuous security and monitoring service. Why Palo Alto should keep pushing

Because of the fast-increasing number and complexity of attacks, the cybersecurity industry is expanding and evolving. Cloud computing and the booming number of connected devices makes business operations safety a difficult task. Palo Alto Networks continues to innovate in-house, but acquiring new and growing start-ups has been key to keep up with the demands of customers.

It's been working. Palo Alto grew revenue and adjusted earnings by 29% and 47%, respectively, during the 2018 fiscal year. So far in 2019, revenues and adjusted earnings are up another 30% and 40%. That implies that the company is not just benefiting from a growing industry, but it's also consolidating market share to itself. According to Global Market Insights, the cybersecurity industry was $120 billion in 2017. It's expected to grow to over $300 billion by 2024, implying a growth rate of nearly 17% a year over that time frame.

With its sandbox getting so much bigger -- not to mention constantly evolving -- Palo Alto is wise to keep the pedal to the metal and keep sopping up market share. It's coming at a cost, though. While the top line is still pushing well over 20% year over year, the adjusted bottom line is slowing down because of the spending on acquisitions. During the fiscal 2019 third quarter, adjusted earnings increased just 26%; and the forecast for the fourth quarter is for earnings to be up only 10%.

That deceleration may be distressing to some owners of the company. However, Arora hasn't broken his promise to investors, as unadjusted losses (which don't back out stock-based compensation and one-time expenses) are nearing break-even -- all while the acquisition spree continues. Profitable growth is still in the cards, and Palo Alto continues to keep itself in pole position in the security sector. It's going to cost some money along the way, but the longer-term payoff should be much larger.