Please ensure Javascript is enabled for purposes of website accessibility
Log In Help Join The Motley Fool
Free Article Join Over 1 Million Premium Members And Get More In-Depth Stock Guidance and Research
By Keith Speights - Updated Jun 4, 2019 at 8:34AM

Two hope to pick up additional indications for existing blockbuster drugs, while another could score a big victory for a new drug.

Much of the biopharmaceutical world is abuzz right now thanks to the whirlwind of presentations at the American Society of Clinical Oncology (ASCO) meeting over the last few days. As always, some biotechs emerge as winners in the eyes of investors after announcing great results from clinical studies.

But as encouraging as positive clinical results might be, there's still nothing like actually winning FDA approval for an important drug. Three companies that are on track to score major FDA approvals in June are Merck (MRK 1.23%), AMAG Pharmaceuticals (AMAG), and Alexion Pharmaceuticals (ALXN). Here's what could be just around the corner for these drugmakers. 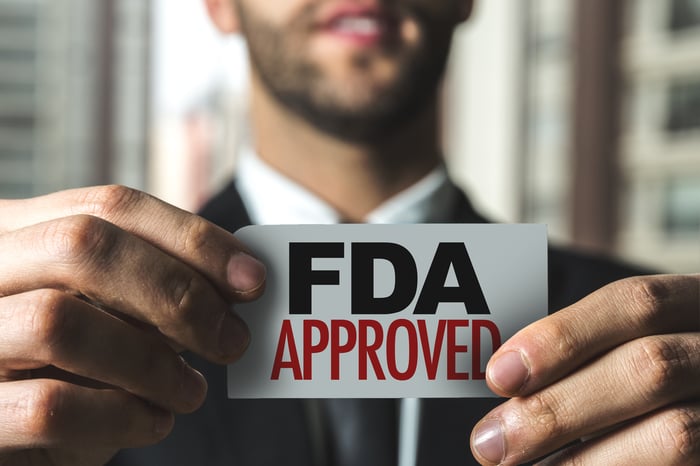 Merck hopes to gain two additional approved indications for its blockbuster cancer drug Keytruda this month. The FDA set a PDUFA date of June 10, 2019, for making a decision on Keytruda as a monotherapy or in combination with chemotherapy as a first-line treatment of head and neck squamous cell carcinoma (HNSCC).

Both FDA decisions are important for Merck. Keytruda remains the top growth driver for the company, and additional indications are key to Merck's long-term strategy. The big pharma company recently experienced a setback with that strategy, though. In May, Merck announced that Keytruda had failed in a late-stage clinical study in previously treated triple-negative breast cancer.

AMAG Pharmaceuticals awaits an FDA decision that's more critical to the company than the approval decisions on Keytruda are for Merck. The FDA should hand down its verdict on Vyleesi in treating hypoactive sexual desire disorder (HSDD) in premenopausal women by June 23.

If approved, Vyleesi won't be the first drug on the market for treating HSDD. Sprout Pharmaceuticals' Addyi gained FDA approval in 2015. But it hasn't been as big a hit as some expected because of safety-related hurdles. Vyleesi shouldn't have the same issues, though. AMAG thinks its drug could have blockbuster potential. Analysts project that sales for Vyleesi could top $800 million by 2024 if it wins approval.

It should be noted that an FDA approval for Vyleesi would also be great news for Palatin Technologies (PTN 10.04%). Palatin licensed North American rights to the drug to AMAG in 2017 and stands to receive a significant milestone payment if Vyleesi wins approval.

Alexion Pharmaceuticals' Soliris has been a huge winner for the biotech since gaining its first FDA approval for treating rare genetic disease paroxysmal nocturnal hemoglobinuria (PNH) in 2007. Over the next decade, the biotech picked up a couple of other approved indications for Soliris.

Now Alexion hopes to add a fourth approval for its top-selling drug. An FDA approval decision for Soliris in treating neuromyelitis optica spectrum disorder (NMOSD) is expected by June 28. NMOSD is a rare disorder of the central nervous system that can cause blindness and paralysis and sometimes lead to premature death.

Gaining another indication for Soliris would be a nice victory for Alexion. NMOSD occurs in between 1 and 10 out of 100,000 individuals, which presents a bigger target population for Soliris than PNH, which occurs in only around 1 in 1 million people.

Are these stocks buys?

Although anything can happen with the regulatory approval process, it appears that Merck, AMAG, and Alexion have pretty good chances of success. With potential good news on the way, are any of these stocks buys?

Merck should continue to deliver solid single-digit sales and earnings growth with a nice dividend yield. That could make it attractive to some investors, but my preference tends toward stocks with higher growth opportunities.

AMAG certainly qualifies as a stock with the potential for strong growth if Vyleesi wins approval. However, my concern is that the drug could have a really slow uptake in the marketplace even though it doesn't have the safety issues that Addyi faced. AMAG could be a big winner over the long run, but my view is to watch the stock from the sidelines.

I'm not so hesitant about Alexion, though. I think it's one of the top biotech stocks to buy right now.

The company's successor to Soliris, Ultomiris, secured FDA approval sooner than expected in December 2018. Alexion could generate annual earnings growth in the mid-teens with sales for Ultomiris growing and a potential new indication for Soliris in treating NMOSD. With the stock trading at less than 11 times expected earnings, I think Alexion is a great long-term pick.