Dollar Tree (NASDAQ:DLTR) is bellying up to the bar: It will begin selling alcoholic beverages at its Family Dollar chain.

Family Dollar has been a drag on Dollar Tree ever since it was acquired in 2015, but it may finally have found its footing again after posting two consecutive quarters of higher same-store sales growth. To keep the momentum going and lure in more customers, the retailer introduced its first adult beverages into 45 Family Dollar stores in last year's fourth quarter. It plans to offer them in as many as 1,000 stores by the end of its fiscal year.

Because alcohol has lower margins than many of the other items it sells, this isn't a profit play for Dollar Tree per se, but rather a move to drive the top line and generate new interest. Booze sales will eventually trickle down to the bottom line as customers end up buying snacks to go with their beverages, but the key is first getting those customers in the door. 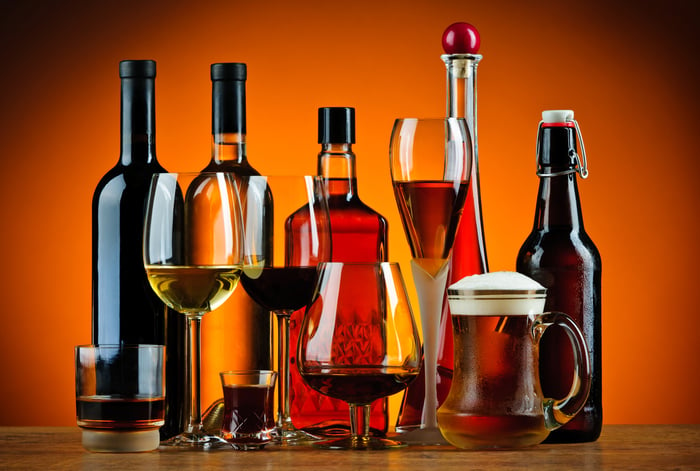 First signs of a turnaround

Ever since Dollar Tree beat out rival Dollar General (NYSE:DG) to acquire Family Dollar in 2015, the chain has been an anchor on Dollar Tree's earnings, weighing down the former industry margin leader. The continued deterioration drew the attention of activist investor Starboard Value earlier this year, which -- among other prescriptions to reinvigorate the deep discounter -- advocated that Dollar Tree sell the Family Dollar chain.

However, the hedge fund recently acquiesced in its demand, saying Dollar Tree's management was convinced that the retailer had at last been integrated into its operations and a turnaround was at hand. That seemed to bear out in the first quarter when Family Dollar posted comps growth of 1.9%, its highest comps result in five years.

Although that's still a slower pace than the 2.5% gain at Dollar Tree, Family Dollar also said that comps at stores that it's been renovating are sharply higher (over 10%), which is why it has vastly expanded the number of stores it wants to remodel to 1,000 in 2019. It's unclear if these are the stores that will also carry the alcoholic beverages.

Dollar Tree is implementing another of Starboard Value's ideas, experimenting with charging higher prices at a number of its stores. By "breaking the buck," the deep discounter will be able to offer a greater variety of merchandise that still represents an exceptional value to consumers while also padding its bottom line.

Dollar Tree also plans to jump-start growth at Family Dollar by expanding the number of freezers and coolers in some 400 stores to add more consumables, which tend to drive more repeat traffic. It also said it would rebrand 200 Family Dollar stores to Dollar Tree and would close down an additional 390 underperforming stores, most of which would occur in the second quarter. It typically closes 75 stores in a year.

Alcohol is no panacea for the chain, and it's yet another item that further distances itself from Dollar Tree. One of the big problems Dollar Tree has had with Family Dollar is that there is little product overlap between the two chains, so the synergies many businesses get when they acquire another is not there for these two. While Family Dollar will begin selling more Dollar Tree items in its stores, there remains a great divide between them.

Moreover, because Family Dollar is in more urban neighborhoods, it is going to face significant competition from existing liquor stores. Alcohol may drive some additional traffic, but it has never really been a category for deep discounting.

Not a clear path forward

The plan to introduce alcohol into Family Dollar was first revealed in March and is now picking up steam. But investors would do well to remain cautious with Dollar Tree because the retailer suddenly has a lot of new moving parts.

Beyond introducing adult beverages, store renovations, and store closures (there are still over 8,000 Family Dollar stores in the U.S.), all of which will impose costs in the near term, Dollar Tree is testing higher prices in its namesake stores and is facing higher freight and transportation costs. There is also the looming threat of additional tariffs on a broad swath of goods that could hurt the deep discounter.

Two quarters of improvement at Family Dollar is a good start, but it's not yet a trend, and Dollar Tree still needs to prove that alcohol can meaningfully drive more sales.