The Vermont senator called on the retail giant to pay a $15-an-hour minimum wage. And Walmart responded.

Vermont Sen. Bernie Sanders took a trip to Walmart (WMT 0.21%) on Wednesday and asked to speak to management.

After a successful campaign in 2018 to persuade Amazon.com (AMZN -0.07%) to raise its minimum wage to $15 an hour, the Democratic presidential candidate is calling on Walmart, the nation's biggest private employer, to do the same.

Sanders was one of two speakers to advance a proxy proposal at Walmart's annual shareholder meeting, demanding the company add a store associate representative to its board and raise its minimum wage to $15 an hour, which he considers to be closer to a living wage.

Sanders lambasted the company for paying "starvation wages," and accused the company and corporate peers of "greed." He said Walmart is burdening the U.S. taxpayer by creating a situation where the government has to support its employees with food stamps and other services. 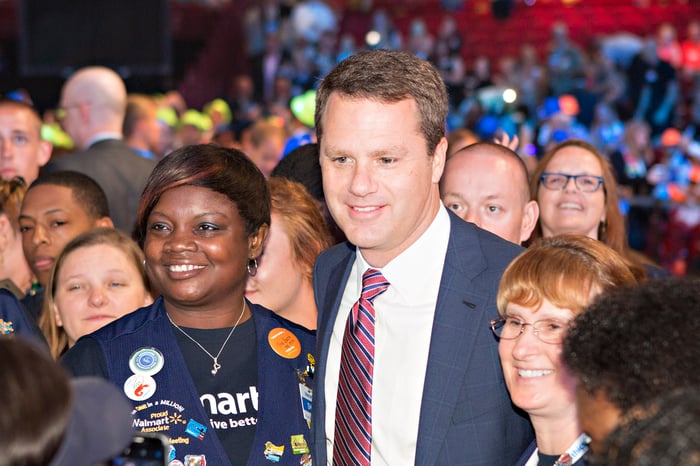 The senator directed much of his criticism at the Walton family, the descendants of Walmart founder Sam Walton, whom he said were the wealthiest family in the U.S., worth about $175 billion. He also noted that Walmart CEO Doug McMillon makes about 1,000 times as much as the company's average worker. Sanders added that many of Walmart's competitors, including Amazon, Costco, and Target, have already made plans to raise their minimum wage to $15 an hour, and suggested that Walmart, which made $10 billion in profit last year, could easily do the same.

At the event, Walmart chief legal officer Rachel Brand calmly responded to Sanders by saying the company does not support his proposal, but said that the retailer recognizes the importance of "listening to and investing in its associates."

Brand said the company did not support this resolution, either, though she added that any sexual harassment at Walmart stores is unacceptable.

Sanders' words were far from the first time that Walmart has taken fire for its wages and general treatment of employees.

Over the past two decades, it has been a regular target of labor activists, unions, politicians, and others who believe the company has underpaid employees. They allege that, because of its market power, Walmart has artificially suppressed wages in the retail industry as it fights a brutal price war with competitors. It has even been blocked from opening a store in New York City because of its history of paying low wages and its anti-union stance.

In a statement by McMillon and a blog post on the company's website, Walmart pre-emptively addressed Sanders' complaints, delineating the many benefits, opportunities, and advantages Walmart's employees receive.

The company portrayed itself as providing ample opportunity for store-level associates to advance. It said more than 75% of store-level management started out as hourly associates and that more than 215,000 associates were promoted to jobs with more responsibility and higher pay last year. Walmart employs about 1.5 million associates in the U.S.

McMillon also noted that the company has increased starting wages by about 50% over the last four years -- from $7.25 an hour to $11 an hour -- and that associates earned $739 million in bonuses last year. He said the company offers health insurance for as low as $28 per pay period and touts its dollar-a-day college tuition program. And he said Walmart has recently expanded its parental leave program and added an adoption benefit.

McMillon's argument was clear: Despite Sanders' criticism, the company is consistently improving its wages and benefits for employees and is doing more to offer opportunity to low-wage workers than many of its peers.

He also called on Congress to raise the federal minimum wage from $7.25 an hour, placing the burden to pay a living wage on the federal government rather than individual employers.

Sanders' attention on the company is unlikely to go away, especially as the presidential race progresses. The senator has made fair wages and middle-class issues the focus of his political career. He is just one of a number of candidates calling for increased scrutiny of the country's biggest corporations.

Sanders' critique in and of itself isn't likely to have a direct impact on the company's bottom line, but it could affect Walmart's reputation, which is concerning. Walmart's reputation as a poor employer has kept it out of New York City and made it difficult to do business in other liberal-minded communities. As the company seeks to move beyond its traditional strength in rural America toward e-commerce, tech-savvy management, and the acquisition of upstart brands like Jet.com and Bonobos, it is in the company's best interest to shake its reputation as a tightfisted boss.

McMillon made some good points in the meeting. The company treatment of employees has advanced significantly in recent years -- just not enough for activists like the senator. Over the coming years, Walmart will likely continue to move at its own pace on wages and benefits rather than bend to the demands of a politician.