A mid-stage clinical trial has investors excited about the biotech's future.

Shares of La Jolla Pharmaceutical Co. (LJPC) are up 26% at 12:15 p.m. EDT Friday, continuing a 92% jump yesterday after the biotech announced impressive results for a phase 2 study of the company's hormone LJPC-401 in patients with hereditary hemochromatosis, a disease that results in iron accumulation in the body.

It was only an interim analysis of the mid-stage study of 26 patients -- 12 patients taking the drug and 14 on placebo -- but the small patient numbers were enough to show that the drug is clearly working. 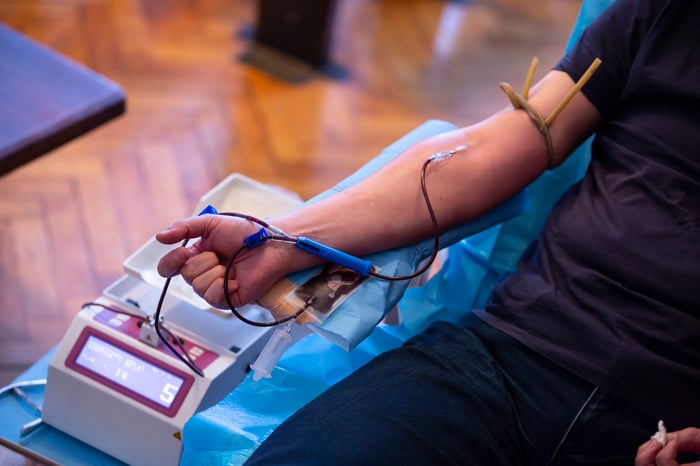 The news is quite the comeback for La Jolla Pharmaceutical, which was left for dead earlier this year after reporting disappointing results and guidance for Giapreza, its approved drug for increasing blood pressure in patients with septic or other distributive shock.

Of course, it'll be awhile before LJPC-401 can get onto the market and make up for the disappointing Giapreza sales. The full results of the hereditary hemochromatosis study are expected in the second half of this year, at which point the company would need to talk with regulators about the next step. A phase 3 study would probably be required, but the full data might be good enough to gain an accelerated approval while La Jolla Pharmaceutical runs a confirmatory phase 3.

LJPC-401 is also being tested in a phase 2 clinical trial in patients with beta thalassemia, where one of the treatments is blood transfusions -- adding blood -- which lead to increased iron levels. Data from that study are expected in the middle of 2020 and, if the trial is successful, management thinks that'll be enough to gain approval in Europe and possibly the U.S.

Between now and then, La Jolla Pharmaceutical will likely have to raise some cash; the company ended 2018 with $172 million in the bank, which management sees as enough to get the company into the second half of 2020. Assuming the capital raise comes through a secondary offering, current shareholders will end up owning a smaller piece of the pie, although more good news could certainly increase the size of that pie.