After hitting a new milestone of 255 million paid subscriptions last year, the music industry is set to continue marching higher, fueled by the secular shift to streaming. Apple (NASDAQ:AAPL) and Spotify (NYSE:SPOT) have been driving that transition, as the two companies now command a combined paid subscriber base of over 150 million after Spotify hit 100 million paid subscribers in the first quarter. The total number of paid music-streaming subscriptions worldwide is now forecast to skyrocket to 1.15 billion by 2030.

It's a good time to be a music streamer. Spotify is expected to remain the top dog in music streaming for the foreseeable future. Image source: Spotify.

Goldman Sachs has released fresh estimates on the music industry (via MusicBusinessWorldwide and Rolling Stone), boosting its forecast of global revenue to $45 billion in 2030, up from a prior estimate of $44 billion. For reference, the global recorded music industry brought in $19.1 billion in revenue across all categories in 2018, according to recent figures from the International Federation of the Phonographic Industry (IFPI). Of the $45 billion in 2030 revenue, streaming is expected to represent $27.5 billion of the total, according to Goldman's estimates. 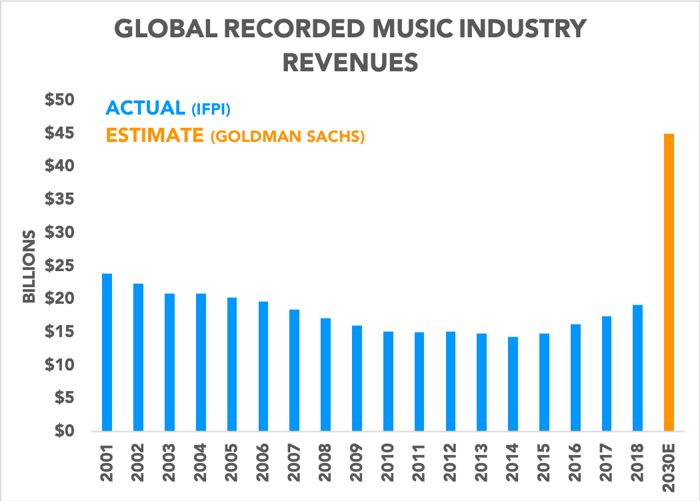 After years of contraction due to the shift away from physical formats toward digital formats and streaming, the industry has started to recover in recent years. Goldman's estimate represents huge upside over the next 11 years. "After nearly two decades of disruption, the music industry is undergoing a massive revival," analysts led by Lisa Yang write in the report. "Artists, labels, and publishers are cashing in on the growing popularity of streaming platforms like Spotify and Apple Music -- and consumers are signing up for subscriptions like never before."

Apple and Spotify should continue to lead the market, although competition from other tech giants both foreign and domestic may chip away at their respective market shares. China's Tencent Music (NYSE:TME) is expected to make strong gains in the years ahead; meanwhile, U.S.-based companies like Amazon, Facebook, and Alphabet's YouTube should collectively grow their piece of the market.

On the flip side, average revenue per user (ARPU) is expected to continue trending lower, which is something that Spotify investors have become accustomed to as the Swedish streamer has been seeing strong uptake of family plans, which have lower ARPU but much stronger retention characteristics. Goldman expects ARPU to decline from $32.70 in 2018 to $24.60 in 2030.

In no uncertain terms, streaming is creating a musical renaissance, and the subscription model is here to stay.