Please ensure Javascript is enabled for purposes of website accessibility
Log In Help Join The Motley Fool
Free Article Join Over 1 Million Premium Members And Get More In-Depth Stock Guidance and Research
By Lee Samaha - Updated Jun 7, 2019 at 9:20AM

The industrial conglomerate raised the midpoint of its earnings guidance in the first quarter, but it wasn't enough to spur optimism in its stock.

Investors in United Technologies (RTX -0.29%) might be excused for being baffled by the double-digit decline in the stock price following a set of first-quarter earnings (released in late April) that saw management raise full-year EPS guidance to a range of $7.80 to $8 compared with a previous range of $7.70 to $8. It was an all-the-more impressive hike given that management priced in a $0.10 impact from the cut in the Boeing 737 MAX production rate.

No matter. The stock still declined 11.4% in May according to data provided by S&P Global Market Intelligence. Moreover, the decline outpaced the single-digit declines in the S&P 500 and peers like Honeywell and General Electric. 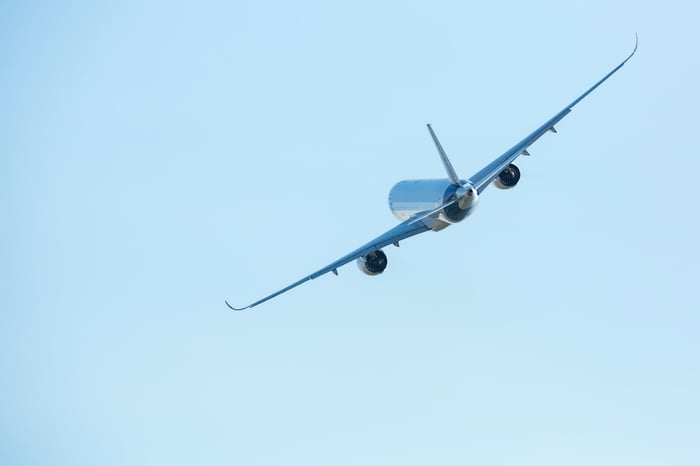 Given that Honeywell and GE also have significant aerospace exposure, it can't be put down to a souring of the market's perception over civil aviation or defense. Moreover, the blame cannot go to the impact of the Boeing 737 MAX grounding and production cut because GE has significantly more exposure.

So what's going on? The answer probably lies in fears over the latest escalation in the trade conflict. The imposition of tariffs on imported goods from China and/or Mexico could lead to an increase in costs, particularly at Carrier (United Technologies' climate control, fire, and security business). Meanwhile, trade friction with China could hurt attempts by Otis (elevators and escalators) to increase new equipment volumes in the all-important China market.

United Technologies is undeniably at risk from an escalation in the trade conflict, but it's hard to predict how long or deep the impact will be, or whether the company can respond by finding other product sources. Still, the market hates uncertainty, so don't be surprised if an increase in trade tension and rhetoric leads to further sell-offs in the stocks of companies like United Technologies.

Investors will just have to wait and see how the trade conflict hurts the numbers at United Technologies. However, given that the company lost around $14 billion in market cap in May and it currently trades on a forward P/E of just under 16, it's hard to conclude that the impact will be close to the $900 million needed to justify the drop in the stock price. All told, the market looks like it's overreacting here.