Please ensure Javascript is enabled for purposes of website accessibility
Log In Help Join The Motley Fool
Free Article Join Over 1 Million Premium Members And Get More In-Depth Stock Guidance and Research
By Lee Samaha - Updated Jun 7, 2019 at 7:47AM

The welding equipment manufacturer faces an uncertain outlook, but a rival's results and guidance suggest it's not so bad.

Shares of Lincoln Electric (LECO 1.42%) declined 13% in May, according to data provided by S&P Global Market Intelligence. The move marks a combination of an ongoing negative reaction to the company's first-quarter earnings report released toward the end of April and a general sell-off in industrial stocks with significant cyclical exposure.

In plain English, it means the market isn't very confident in the outlook for companies like Lincoln Electric. After all, if there's going to be a significant slowdown in industrial production, then welding and cutting equipment manufacturers will, too. Lincoln claims to be the world leader in its industry so it has a broad range of industry and geographic exposures. That means when European manufacturing and/or the global automotive industry catches a cold, Lincoln will start sneezing soon enough. 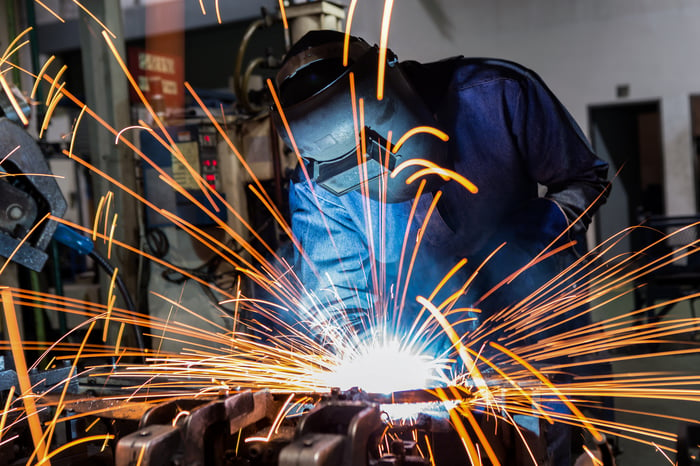 Moreover, CEO Chris Mapes' statement on the earnings release is an implicit recognition of the company's priorities right now: "During this cautious period in the cycle, we remain focused on profitable growth and improving returns. Exciting new product launches, acquisitions and a strong balance sheet position us well to continue to generate value for all of our stakeholders."

He also acknowledged, "I think we are going to have challenging comparisons certainly in the second quarter" when discussing the international segment's outlook during the earnings call.

There's little doubt that Lincoln's end markets are slowing, but it might be too soon to start pricing in Armageddon scenarios -- not least because one of its key rivals, Illinois Tool Works (ITW -0.33%), is still giving relatively positive guidance. In a somewhat surprising display of strength, Illinois Tool Works' welding segment achieved 3% organic revenue growth in its first quarter (5% on an equal day basis). Moreover, its international sales growth of 4% was actually stronger than its North America sales growth of 3%.

It gets better. Illinois Tool Works' management maintained its guidance for full-year organic growth of 3%-6% in its welding segment -- an impressive number when you consider that growth was 10% in 2018.

There's little doubt that the market has sold off Lincoln on the back of fears of a slowdown in industrial conditions, but Illinois Tool Works' numbers and guidance suggest there are pockets of strength out there.

Moreover, as Mapes notes, Lincoln's strong balance sheet is enabling management to make acquisitions -- not a bad strategy to follow in a period of cyclical slowdown for the industry -- and so far its margin has held up well (first-quarter adjusted operating margin actually increased to 13% compared to 12.8% in the same period last year).

All told, despite the fears of a cyclical slowdown, it's too early to count out Lincoln Electric.