The toolmaker has seen an unusually volatile year in terms of its stock price. Here's the lowdown.

Shares in toolmaker Stanley Black & Decker (SWK 5.08%) are down 8% over the last year, but the single-digit move belies a far more volatile year. Part of it is surely down to the market and to sentiment around stocks exposed to the construction and industrial sectors, such as Caterpillar (CAT 4.36%). However, the company also has its own specific earnings drivers that have bounced the stock around. Let's take a closer look at what's going on and what investors can expect going forward.

Last year wasn't a stellar one for the company, with the stock price falling nearly 30%. The reason? Despite a 5% organic sales increase (reported revenue was up 8%) in 2018, a combination of commodity price increases, tariff impacts, and unfavorable currency movements hit earnings to the tune of $370 million. As such, non-GAAP (generally accepted accounting principles) operating profit rose only 2.1% to $1.9 billion for the full year. If you add back the $370 million in charges, though, operating profit would have risen by a far more impressive 22%. Moreover, operating margin would surely have increased instead of declining to 13.6% from 14.4% in 2017. 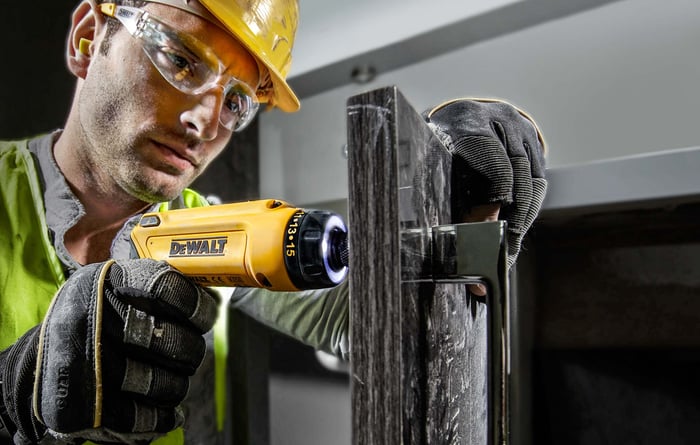 Moving into 2019, there are two dynamics at play. First, the headwinds from 2018 have also extended into this year. Second, management shocked the market in January by giving weak-looking guidance on its fourth-quarter earnings call -- full-year 2019 sales were forecast to grow organically by just 4%, and more margin pressure was estimated to lead to an anemic-looking growth of just 4%-6% in full-year earnings per share.

It gets worse. Management's outlook and commentary about the impact of interest rate increases on housing and automotive weighed heavily on the stock, and some investors may have called the company's full-year guidance into question.

A good set of first-quarter earnings

Fast-forward to the first-quarter earnings report toward the end of April, and a solid set of results and commentary confirmed the company was on track for the full year. Management still expects 4% organic sales growth for 2019, but adjusted EPS guidance was increased to a range of $8.50-$8.70 from $8.45-$8.65.

Moreover, organic revenue growth of 5% in the first quarter was above the full-year forecast, and CEO Jim Loree claimed his company outperformed internal expectations despite $160 million of "carryover headwinds" in the first quarter. He then told investors: "We expect modest margin rate accretion for the total year with the return to near-15% levels in the back half, assuming a stable input cost and tariff environment. This is a simple function of price cost timing as the year unfolds."

Moreover, regarding the interest rate-sensitive areas referred to in the previous earnings call, Loree told investors, "the market is more stable than I think we were thinking a quarter ago, although there is some choppiness in housing and so on."

Putting all of this all together, it's not difficult to start to build a powerful investment case for the stock. After all, if the tariff/commodity/currency headwinds abate as foreseen, Stanley could end up being a company growing revenue in the mid-single digits with high-single-digit organic EPS growth prospects -- something management predicted recently during its investor day presentations.

In addition, Stanley looks in better competitive shape than a peer like Caterpillar. For example, the toolmaker's 5% organic growth in the first quarter was supported by 2% from pricing. Both companies are expecting an improving price/cost dynamic in the second half, but Caterpillar is seeing very competitive pricing competition in China (construction industries segment).

Meanwhile, the only real negative from Stanley's first quarter was a lowering of expectations in the industrial segment on the back of further deterioration in the automotive market -- industrial sales and margin are both expected to be lower for the full year compared to previous guidance for a flat performance for both.

Is Stanley Black & Decker a buy?

Looking beyond the headwinds in 2018 & 2019, the analyst consensus for Stanley's EPS in 2020 is $9.49, putting the stock on a 2020 P/E ratio of 13.8 times earnings. That's a reasonable valuation for a company aiming for double-digit annual earnings growth over the next few years. For reference, management expects organic earnings growth of 7%-9% to be augmented with acquisitions that will lead to 10%-12% annual EPS growth.

It's a tempting proposition, but the company has a lot to do on margin in the coming quarters, and the industrial segment's automotive exposure could put more pressure on earnings. On balance, it's probably better to monitor events -- particularly management's headwind/margin outlook -- for a quarter or two before deciding whether the stock is a good value.

2 High-Yield Dividend Stocks You Could Hold for Years

This Dividend Stock Is Turning Its Fortunes Around

Down Between 11% and 62%: 3 Reliable Dividend Kings to Buy and Hold for Decades to Come