Don't be put off by the name. PagerDuty has clear potential for significant growth.

This past week a slate of newly IPO'd companies announced their first earnings as public entities. Beyond Meat, which makes vegetarian meat alternatives, and Zoom Video, which facilitates video conferencing, both saw shares explode more than 20% following their release.

A third company received much less attention over its IPO, but, out of the three, it has the best potential to be the biggest winner over the next decade. That company is Software-as-a-Service (SaaS) newcomer PagerDuty (PD -2.62%). 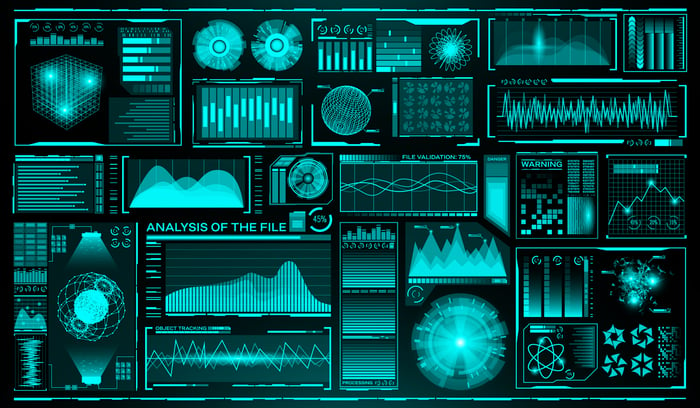 What does PagerDuty do?

Last month, I bought shares of PagerDuty. In that article, I tried to explain how the company's technology works. In short, it helps companies respond to downtime on e-commerce sites. My explanation, however, was lacking.

On PagerDuty's earnings conference call (transcript via Seeking Alpha) on Thursday, CEO Jennifer Tejada did an even better job helping the average investor understand the technology:

Imagine you're online shopping for a Golden State Warriors jersey. You do a quick search, find an online store ... but when you go to check out nothing happens. You get the dreaded spinner or as my daughter prefers to call it, "The wheel of death."

[This] seemingly simple transaction is an increasingly complicated set of order management, dynamic pricing, and payment application ... . This is what's happening in the background at the e-commerce company when your checkout screen freezes.

Several monitoring applications simultaneously fire alerts to different teams ... . These disparate, often globally dispersed, teams then work these events and [indiscernible] they are unaware that they are all troubleshooting components of a single related issue that's fast becoming a customer issue with negative top and bottom-line consequences.

Meanwhile, you, the consumer have given up and gone to a competitive [site] for Warrior swag.

It's not hyperbole to say this is how e-commerce companies die in today's age.

When PagerDuty's technology is at the helm, a company can see that all of these are related issues. Instead of setting five different teams in different sections of the world to work on it, PagerDuty notifies the most important team of the issue, and it is resolved in short order.

There are currently five different tools PagerDuty offers to help navigate these situations. Think more about how important this technology is becoming and you can see why I'm excited about owning shares.

Booming growth with a wide moat

There was a lot to like in figures from the most recent quarter. PagerDuty's revenue grew 49% year over year (YoY), and the company laid out a forecast that called for 38% YoY growth for the entire year.

As exciting as that is, other details left me feeling even better about the company's prospects. For starters, the number of customers with annual contract values of at least $100,000 jumped 51% YoY to 242. 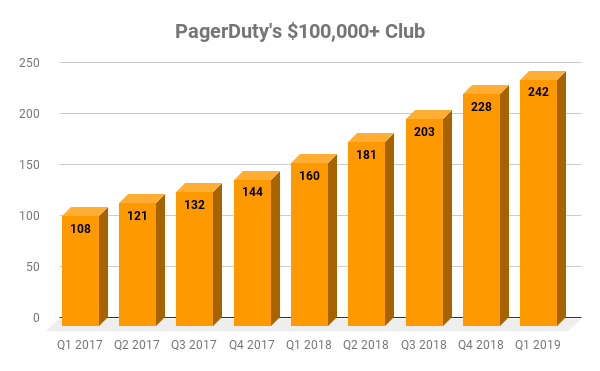 What's more, the company is protected by dual moats. The first is high switching-costs: When a company gets familiar with PagerDuty's platform and interface -- and uses it more and more every day to solve mission-critical problems -- it becomes reluctant to switch to a competitor. Doing so would not only be expensive but include painful retraining that could result in even more downtime.

Concurrently, PagerDuty's predictive artificial intelligence (AI), which helps prevent that "spinning wheel of death" before it ever appears, gets stronger and stronger with more data. The more customers PagerDuty has, the better its AI. Those are powerful network effects.

We can monitor how strong the company's moat is by looking at dollar-based net retention (DBNR). This measures how much one cohort of customers pays from one year to the next, filtering out the effect of new customers. This lets us know if PagerDuty is retaining customers (DBNR near 100%) and/or widening its moat (DBNR well over 100%).

Here's where the company stands now: 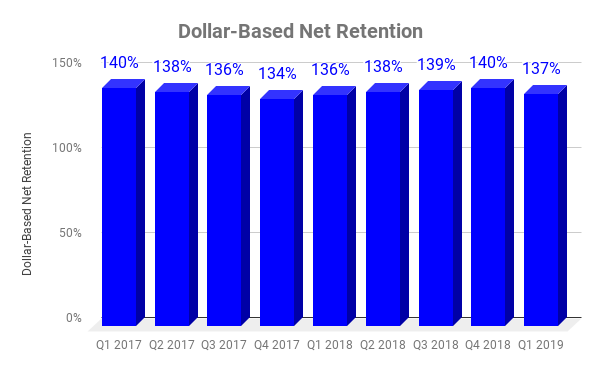 As exciting as all of this is, none of it was actually the most exciting news coming out of the company's earnings report. During the conference call, Tejada offered up two very interesting anecdotes.

Following the two-week trial, one of the world's largest oil and gas companies adopted PagerDuty to supply fuel trucks and terminals in most of their 14 countries.

The company, she said, was able to monitor deliveries and deal with logistical issues better thanks to PagerDuty. She followed that example up by detailing how Cemex, a Mexican cement company, did much the same thing.

The company already estimates the value of its opportunity in helping IT teams at $25 billion. To put that in perspective, that's 154 times larger than what the company expects to draw in this year. Throw in all of the opportunities that could crop up with companies like Cemex or this oil and gas company and the sky's the limit!

All this being said, it's important to keep some things in perspective. PagerDuty isn't profitable, and it trades for over 20 times trailing sales. There are high expectations baked in, and the stock is likely to be extremely volatile for the next several quarters.

When Motley Fool trading rules allow, I will be buying enough shares for PagerDuty to account for 3% to 4% of my family's invested money. If you're interested in a fast-growing SaaS stock -- and have the stomach for volatility -- I suggest you consider buying shares yourself.

Why PagerDuty Stock Jumped 19% in December

Why Shares of PagerDuty Stock Are Rising Fast Today

Why PagerDuty Stock Tumbled on Friday
413%