Please ensure Javascript is enabled for purposes of website accessibility
Log In Help Join The Motley Fool
Free Article Join Over 1 Million Premium Members And Get More In-Depth Stock Guidance and Research
By Keith Speights - Jun 9, 2019 at 9:00AM

Some marijuana stocks are worth a serious look. These aren't.

Let's face it: Many marijuana stocks stink right now. After a sizzling start to the year, cannabis stocks overall have experienced a downturn. For some of them, the pullback could create a great buying opportunity for aggressive investors. But not all marijuana stocks have declined recently. And whether they're up or down, not every marijuana stock is a great pick to buy.

Three pot stocks that I personally wouldn't touch with a 10-foot pole right now are Insys Therapeutics (INSY), Namaste Technologies (NXTTF -1.50%), and Medical Marijuana (MJNA 0.00%). Here's why these stocks get a thumbs-down in my view. 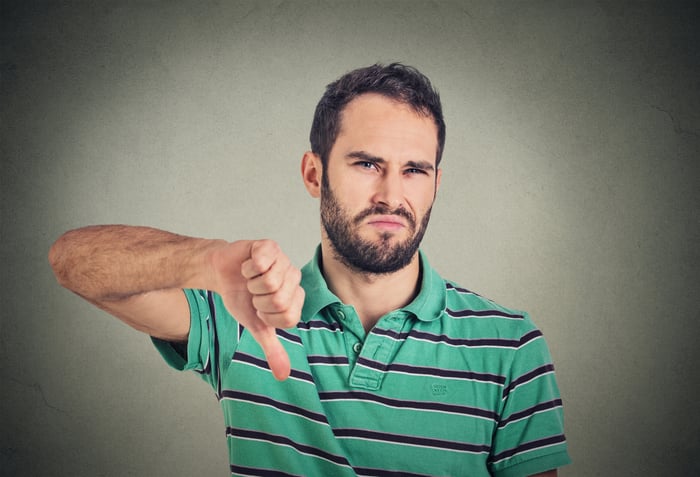 When a company warns that it might not have enough money to keep the lights on, that's a pretty good signal that you might want to stay away from its stock. And that's exactly the warning that Insys Therapeutics gave last month. As you might expect, its stock plummeted on the news.

Insys' problems stem primarily from sinking sales of its opioid drug Subsys. The company wants to sell Subsys as part of its transformation to a cannabinoid-focused biotech. So far, though, there are no buyers.

The biotech's board of directors replaced Saeed Motahari with Andrew Long as CEO in April. Long had previously served as Insys' CFO. He has a tough job ahead of him. Insys might not even have enough money to meet demands from the U.S. Department of Justice (DOJ) related to a settlement agreement over allegations of improper marketing practices of Subsys in the past.

At one point, I thought that Insys perhaps had a decent shot at turning things around. But I changed my tune over a year ago and am still skeptical about the beleaguered biotech's prospects.

Namaste Technologies is a marijuana stock that's actually performing quite well right now. It was the best marijuana stock in May with a gain of 16%. But this recent surge isn't enough to make me bullish about Namaste.

The company was targeted by noted short-seller Citron Research in October 2018. Citron alleged that then-CEO Sean Dollinger lied to investors about Namaste shares being accepted for listing on the Nasdaq stock exchange. It also alleged that Dollinger sold its U.S. company, Dollinger Enterprises U.S., to another Namaste executive, David Hughes, and didn't disclose the insider transaction.

Namaste's board of directors appointed a special committee to investigate the allegations. That committee ultimately found that Dollinger had indeed failed to disclose the sale of the U.S. asset to Hughes. The board promptly booted Dollinger out, replacing him with Meni Morim, who had previously served as chief product officer. Namaste also made changes to its board of directors.

I think that Namaste has taken some positive steps in righting the ship. However, that ship isn't seaworthy enough for me yet to be confident about investing in this stock.

With the U.S. legalizing hemp in December 2018, you might think that Medical Marijuana's shares would be performing relatively well. They did -- but only for a brief period. The stock is currently down close to 20% year to date and is lagging well behind other U.S.-based companies that are focused on the hemp CBD market.

The U.S. Food and Drug Administration (FDA) could take a while in establishing regulations governing the sale of hemp CBD products in the U.S. In the meantime, Medical Marijuana could be operating in a gray area by selling some of its products in the U.S.

The company has lost money for years. Its balance sheet includes over $45 million of goodwill -- almost half of its total assets. Goodwill represents the amount that a company pays for an acquisition above and beyond the book value of the acquired company. When I see as much goodwill as Medical Marijuana has on its books, it makes me at least a little nervous.

What could change my mind

The key words in my position that I wouldn't touch these marijuana stocks with a 10-foot pole right now are at the end of that statement: right now. I could be persuaded to change my mind in the future. What could shorten the pole and pique my interest in these stocks?

For Insys, if it found a buyer for Subsys, managed to raise enough cash to fund operations, and began to see strong momentum for its cannabinoid products and pipeline, I'd give it another look. For Namaste Technologies, I'd reconsider the stock if its new management demonstrated a clear path to profitability and restored confidence among investors. And for Medical Marijuana, my standoffishness might diminish if the FDA quickly established hemp CBD regulations that were advantageous to the company.

Those are all big ifs for now, though. And that means the proverbial pole I'd want to use to keep my distance from these three stocks is still at least 10 feet long.