Please ensure Javascript is enabled for purposes of website accessibility
Log In Help Join The Motley Fool
Free Article
Join Nearly 1 Million Premium Members And Get More In-Depth Stock Guidance and Research
By Daniel B. Kline – Jun 10, 2019 at 8:47AM

The company says it's close, but there are major hurdles to clear.

Amazon.com (AMZN -1.17%) CEO Jeff Bezos first started talking about using unmanned flying vehicles, aka drones, for delivery back in 2013, during an interview on 60 Minutes. The idea in its abstract holds a lot of appeal.

Imagine ordering something from the online retail giant and having a drone drop it on your doorstep an hour or so later. It's like something out of science fiction brought to reality. And it's clearly possible -- but there's a huge difference between testing one drone successfully and figuring out how to use drones in an area with any sort of population.

Despite those potential problems, Amazon has continued working on drones. In fact, its worldwide consumer division's CEO, Jeff Wilke, demonstrated a new prototype at the company's recent re:Mars conference. It's a fully electric drone that can carry packages weighing up to five pounds and fly for up to 15 miles.

"You're going to see this new drone delivering packages to customers in months," Wilke told the crowd, according to Geekwire. 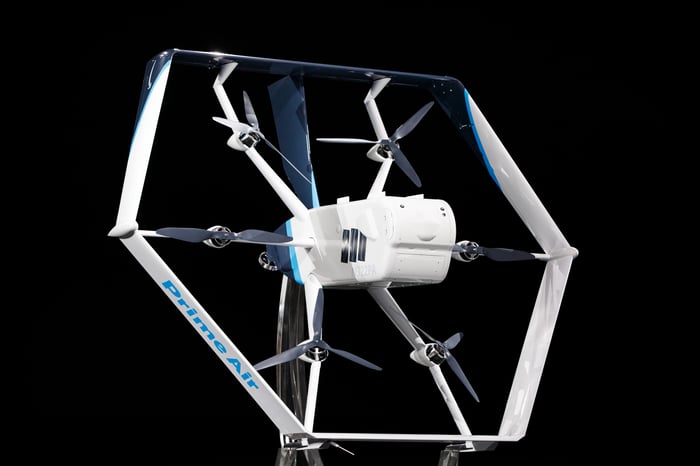 Amazon said it's close to being able to deploy drones for delivery. Image source: Amazon.

Building drones that work solves part of the problem. The second issue -- and it's a much bigger one -- is getting Federal Aviation Administration (FAA) approval to do more than test them.

"We right now do have permission to do testing in a couple of locations in the United States with the FAA," Wilke told GeekWire. "But our objective is to have a certified commercial program that allows us to deliver to customers. That's what we're working toward, in months."

That all sounds hopeful, but it's where Amazon will crash into reality a bit as it faces consumer pushback. Do major cities want hundreds -- maybe thousands -- of drones in their skies? How do you prevent vandalism, or keep drones from crashing into people?

Wilke explained in a blog post how the company has made its drones safe. He makes a convincing case that may hold up until the inevitable first accident.

"Some drones are autonomous but not able to react to the unexpected, relying simply on communications systems for situational awareness," he wrote. "If our drone's flight environment changes or the drone's mission commands it to come into contact with an object that wasn't there previously -- it will refuse to do so -- it is independently safe."

The drones have safety measures powered by artificial intelligence. They seem very impressive, but we've seen crashes with driverless cars where testing has been even more extensive. In addition, consumers accept that car crashes happen, and some level may fit within accepted norms, as long as it's well below the numbers when drivers are involved.

With delivery drones, the acceptable number of injuries is zero. Nobody gets hurt through current delivery methods -- aside from maybe a strained back -- so drones have a very high standard to meet.

Here's what will happen

Drones will be real, but they won't be widespread. That's partly because of how they will make deliveries.

"For the drone to descend for delivery, we need a small area around the delivery location that is clear of people, animals, or obstacles," Wilke wrote. "We determine this using explainable stereo vision in parallel with sophisticated AI algorithms trained to detect people and animals from above."

Expect to see drones in suburban areas where people have yards. That will be an accomplishment for Amazon -- and it's a long way from FAA approval to do even that -- but it's going to be a niche for the company. This is, at least for the foreseeable future, a small tool in the company's delivery arsenal. The technology needs to get smaller and much smarter before it can be anything more.