It's still well behind Mother's Day.

Father's Day spending has skyrocketed since 2009, when only $6.6 billion was spent on the holiday honoring dads. Spending in 2019 is set to hit a record $16 billion, according to an annual survey conducted for the National Retail Federation (NRF), which looked at how much folks plan to spend on fathers for the upcoming holiday on Sunday, June 16.

That's up from $15.3 billion in 2018, but still well below the $25 billion spent on Mothers Day last May. Still, it's a big increase, which is being driven by more spending by consumers between ages 35 and 44, as well as higher spending on clothing, special outings, and gift cards, according to the NRF data from 7,591 consumers. 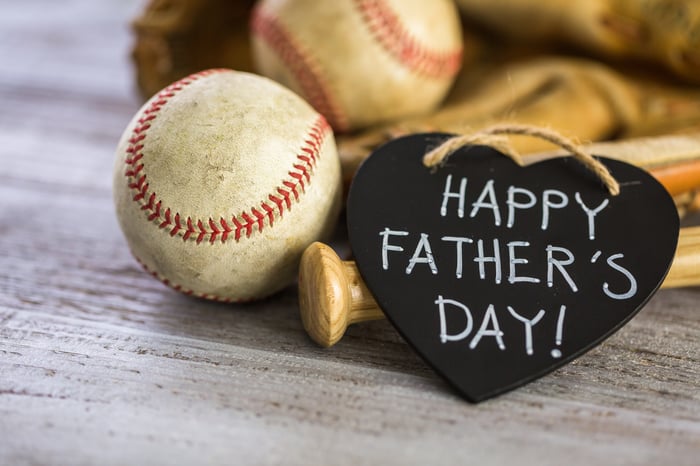 Gone (for the most part) are the days when Father's Day means dad gets a new tie, a "You Go Grill" apron (or something equally lame) and then goes to grill his own meal.

The most money will be spent on "special outings" ($3.3 billion), followed by "clothing" ($2.5 billion), and gift cards ($2.3 billion). Greeting cards account for only $830 million in spending but will be purchased by the highest percentage of people (61.7%).

"Fathers, husbands, and sons can expect to feel the love this Father's Day," said NRF CEO Matthew Shay. "Over the past decade, spending on Father's Day gifts has increased significantly. Retailers are ready with gifts that will have no problem impressing dad."

How should you honor dad?

Sure, dad would enjoy concert tickets or tickets to a sporting event, but most fathers also want their children to practice fiscal responsibility. It can be tempting to break your budget to celebrate, but it's important to stay within your means.

Before you make a reservation at a pricey steakhouse or buy dad the new putter he's been eyeing, consider what you can afford. It's not smart to go into debt to buy presents or pay for meals, especially for someone responsible for teaching you to make smart financial choices.

Dad may no longer be thrilled by a homemade card or a macaroni necklace, but there are low-cost alternatives. You can barbecue cheaply or take a family trip to someplace inexpensive that dad likes (like the beach or a public park).

If you can truly afford it, spend whatever you like to honor your father or the fathers in your life. But when you can't build it into your June budget, make prudent, responsible choices to honor dad (or dads) in a deserving way without going into debt.