On the Q1 earnings call, management talked about the videoconferencing specialist's huge market opportunity, sales strategy for the Zoom Phone, and more.

Zoom Video Communications (ZM 3.59%) reported first-quarter results for fiscal 2020 on Thursday that delighted investors, who sent shares zooming 18.4% higher on Friday and then came back for a buying encore on Monday, driving shares up another 8.5%.

In its first quarterly report since going public in April, the Silicon Valley-based videoconferencing specialist's revenue soared 103% to $122 million. GAAP earnings per share came in at breakeven, compared with a loss of $0.02 per share in the year-ago period, and EPS adjusted for one-time items was $0.03, up from $0.00.

Earnings releases only tell part of the story. Management's comments during earnings calls often contain key information about a company's prospects and strategy. Here are three things from Zoom Video's Q1 call that you should know. 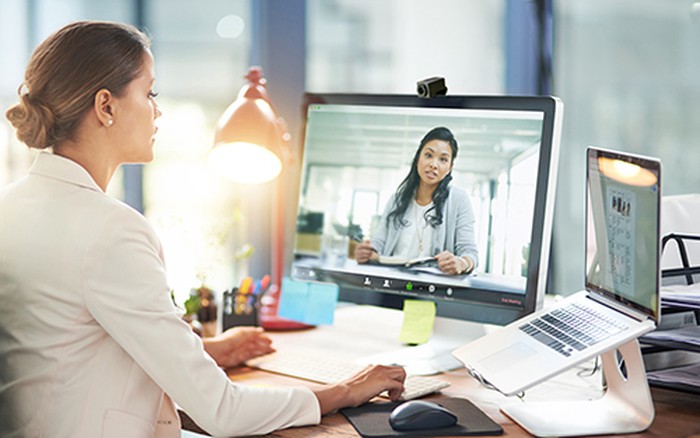 We believe the growth opportunity for Zoom is significant. Based on IDC estimates, the ... TAM [total addressable market] is huge, $43 billion market by 2022. But we believe that it is even larger than that, as we are in the early stages of video becoming the new voice. [IDC is a leading provider of market intelligence for technology and telecommunications markets.]

Zoom operates in the space referred to as unified communications as a service (UCaaS). In its own words, the company "unifies cloud video conferencing, simple online meetings, group messaging, and a software-defined conference room solution into one easy-to-use platform."

Zoom's current annual revenue run rate is $488 million (four times Q1 revenue), so a $43 billion TAM equates to growth potential of 88 times current revenue. Of course, the chances of it grabbing the entire market are about as close to nil as it gets. Nonetheless, if Zoom "only" takes 25% of the market by 2022, for instance, it could grow revenue by about 22 times in three years!

The corporate videoconferencing space is dominated by Microsoft's Skype, Cisco Systems' Webex, and LogMeIn's GoToMeeting, while the corporate contact center market's leading unified communications suppliers include 8x8 and RingCentral. Zoom is involved in the latter realm via "its integrations with Twilio and Five9 that bring Zoom Phone voice tech into each company's contact center suite for outfitting whole teams of customer service agents," as my colleague Tim Beyers wrote.

2. The new Zoom Phone should be a relatively easy sell

Management didn't say that the Zoom Phone, which launched in January, should be a "relatively easy sell" -- these are my words -- but that's the takeaway I got from tuning in to the earnings call. (This event was actually an "earnings call and view," as Zoom employed its technology, so management and participating Wall Street analysts were visible.)

When we look at our go-to-market strategy for our Zoom Phone system, we focus on our existing installed base because they already trust us, they already use the video, they already use the voice, they really like our quality. ... Customers like the [Zoom Phone's] quality, unified collaborating experience and ease of use, and ... some innovative features like seamlessly [being able to] upload your phone call to a video call.

It makes good sense that customers who are happy with Zoom's existing services should be much more open than noncustomers to considering signing in for its phone service. A notable early Zoom Phone win is networking systems and software provider Ciena, which acquired 5,000 initial licenses.

If there is one thing that keeps me up in the night it's ... company culture. [When] we [had] 1000 [employees], I think I [could] remember most of [their names]. I never spent a minute on the people-related issues. ... [N]ow we have almost 2,000 employees and quite often I need to spend time to deal with those people who might have integrity issues or maybe sexual harassment ... [W]e try all we can to make sure we have an open, transparent culture.

Yuan went on to say that the company just hired its first chief people officer and launched an employee survey. Company culture is currently a notable asset for Zoom, according to Glassdoor.com. Both Yuan and the company overall earn high marks from employees, with Yuan getting a thumbs up from 97% of the 215 employees who provided ratings and the company garnering 4.8 stars (out of a total of 5).

Maintaining a happy and healthy company culture is particularly important for tech companies, many of which are based in Silicon Valley, which means they're vying for much of the same top tech talent.

Video killed the radio star, so the 1979 song goes, and 40 years later, Yuan's claim that "we are in the early stages of video becoming the new voice" makes it apparent that history might be repeating itself with a twist.