In 2018, the multinational retail conglomerate sold its money-losing Gilt flash-sale site, sold a 50% stake in its European business to SIGNA Holding, and began to downsize its struggling Lord & Taylor chain. This year, the company has announced that it will shut down its Home Outfitters chain in Canada, close as many as 20 Saks OFF 5TH off-price stores, and seek to sell or find a merger partner for Lord & Taylor.

This upheaval culminated on Monday. First, Hudson's Bay reached a deal to exit the German market by selling its joint venture stake to SIGNA Holding. Second, the company announced that Chairman Richard Baker and several other major shareholders are joining together in an effort to take the storied retailer private. This sent Hudson's Bay shares soaring more than 40%. 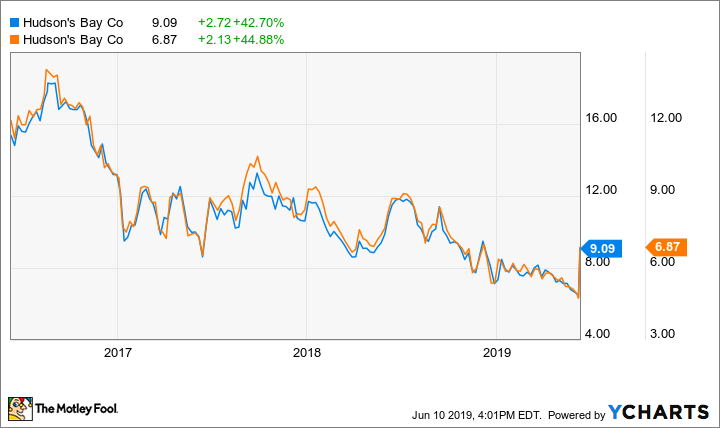 Attempting to leave Europe for good

Hudson's Bay entered the European market in 2015, acquiring the parent of the German Galeria Kaufhof chain (and its real estate) for 3.8 billion Canadian dollars ($2.9 billion). The company financed the acquisition by selling Kaufhof's properties to one of Hudson's Bay's real estate joint ventures.

From a real estate perspective, this acquisition may have looked like a savvy move. Hudson's Bay's German real estate was valued at a nearly 30% premium to the Galeria Kaufhof acquisition price in last year's joint venture deal with SIGNA Holding.

Unfortunately, from a retail perspective, Hudson's Bay's foray into Europe was disastrous. Galeria Kaufhof has reported a string of big losses due to weak sales trends and stiff competition. To make matters worse, Hudson's Bay embarked on a quixotic expansion into the Netherlands, opening more than a dozen stores there beginning in 2017, even as department stores across the world were falling out of favor. Not surprisingly, the Hudson's Bay stores in the Netherlands have been losing huge sums of money.

On Monday, Hudson's Bay announced that SIGNA will buy the other half of Galeria Kaufhof and its real estate (along with related liabilities) for CA$1.5 billion ($1.1 billion). This represents a modest improvement over the valuation used for the joint venture deal last year. However, there's one big caveat: SIGNA won't buy the Netherlands operations, leaving Hudson's Bay to sort out that mess. Hudson's Bay has no interest in continuing to run that business, and it has hired a financial advisor to help it exit the Netherlands market.

The SIGNA Holding deal is expected to close in the fall. Together with the planned exit from the Netherlands and the potential divestment of the Lord & Taylor brand, this will support Hudson's Bay's strategic plan to focus on the Saks Fifth Avenue luxury brand (supported by a smaller network of Saks OFF 5TH stores), as well as its namesake chain in Canada.

In conjunction with announcing the sale of its European operations, Hudson's Bay also revealed that Baker, the mastermind of its global acquisition spree, wants to take the company private. Baker and several other top shareholders -- who collectively own 57% of Hudson's Bay's outstanding shares -- have offered to buy the rest of the shares for CA$9.45 ($7.12) apiece, a level they haven't traded at in more than six months.

Baker and his partners argue that Hudson's Bay still faces major challenges and that it would be easier to address them without the scrutiny that comes with being a public company. Indeed, the company still has to deal with the money-losing Lord & Taylor and Hudson's Bay Netherlands entities. U.S.-China tensions and stock market volatility could also hurt luxury retailers like Saks Fifth Avenue. Lord & Taylor's struggles are just one of the challenges faced by Hudson's Bay. Image source: Author.

That said, minority shareholders -- most notably, activist fund Land & Buildings Investment Management -- aren't likely to be pleased with the proposed takeover price. In recent years, Land & Buildings has repeatedly argued that Hudson's Bay's real estate was worth dramatically more than its share price, even when the shares traded for more than CA$9.45.

Determining the stock's fair value is challenging, as one must weigh Hudson's Bay's real estate value against the significant risks to its business. However, a special committee of Hudson's Bay's independent directors will be charged with doing just that. Under Canadian law, it must seek a formal valuation of the company's stock by an independent appraiser. The go-private deal is also subject to a vote of Hudson's Bay's minority shareholders, along with the closing of the SIGNA deal.

Thus, it's possible that the buyout will fall through or that the price will be negotiated higher. However, given that the prospective buyers hold all the cards -- as the majority shareholders -- it's a good bet that their offer will succeed with only minor modifications, if any.